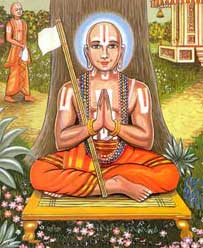 Today is the avirbhava, birthday, of Sri Ramanujacarya. Rama-Navami, the birthday of Lord Rama, is also coming very soon, Throughout Their entire lives, Rama and Sita-devi always had problems, even though Rama is God and Sita-devi is his svarupa-sakti, internal potency. They showed by example that in this world, even if you are a king and have a very strong personality, you will still have to suffer. So try to be like Rama, Sita, and Hanuman. Don't be worried. There are many stories of the lives of great personalities that illustrate this, such as the life of Sri Ramanujacarya.

Sri Ramanujacarya is an incarnation of Laksmana (Lord Rama's youn ger brother), and he accepted the Sri Sampradaya. Srila Bhaktisiddhanta Sarasvati Thakura Prabhupada took many teachings from him, such as the duties of sannyasis, the duties of disciples, and the etiquette of the Vaisnava. He utilized 108 teachings. We follow these teachings, and we have also published them in our Bhagavata Patrika and Gaudiya Patrika (Hindi and Bengali Magazines).

Sri Ramanujacarya took birth in a simple family. His mother and father were not very wealthy, but they were of a high brahmana caste and they were very learned. Ramanuja was an outstanding boy from his childhood. While under the guidance of a Mayavadi guru named Yadavacarya, he was very careful in his studies. One day, when his guru was giving an impersonal explanation of a verse that contained the word taptyasana, he compared the lotus-eyes of the Lord to the hind part of a monkey which is reddish near its tail. Hearing this from his gurudeva's mouth, Ramanuja began to cry in great pain. He felt grief in his heart that his gurudeva had used such a bad analogy for describing the lotus-eyes of the Lord. After collecting himself, he very politely asked if he could say something about the verse. Yadavacarya assented, and Ramanuja very nicely gave many explanations according to Sanskrit grammar. He said that the term taptyasana actually means one who bring s water, and that is the sun. The lotus blossoms by the potency of the sun, and therefore the Lord's eyes are compared to the lotus, not the monkey.

When Yadavacarya heard this, he thought, "This boy is dangerous. He is very expert and is giving such nice explanations. In the future he might uproot all the impersonal teachings from the Vedas, and so I must kill him."

Protected by the Lord

Fearing in this way, he announced to the boys that they would be going on an outing on a particular day. He also very confidentially told a few of his disciples of his plan to kill Ramanuja on that day. Within the group of these disciples, one boy was a cousin-brother of Ramanuja named Govinda. He discreetly came to Ramanuja and quietly informed him of their teacher's intention.

He said, "O brother, you should be very careful, for our teacher is planning to kill yo u tonight when we are all out together."

Hearing this from Govinda, Ramanuja immediately left that place.

Throughout the day and night, he passed through the dense forest, and it was difficult for him to discern his way, especially at night. Seeing His dear devotee in such a state, the Lord appeared in the form of Bharadvaja and, holding a conch in His hand, showed Ramanuja the way. Thus, within no time at all Ramanuja crossed the entire distance of the forest, and he found himself standing outside a village. After some days, out of compassion for Yadavacarya and with a desire to deliver him, he again began studying under his guidance.

After some years, Ramanuja converted Yadavacarya to Vaisnava philosophy, whereupon his teacher became his disciple. At one point thereafter, Ramanuja began hearing of the qualities of a great Vaisnava guru in South India by the name of Sri Yamunacarya, and he eventually became Sri Yamunacarya's d isciple.

Later on he married, and his wife was very quarrelsome. Her behavior was discourteous and uncooperative, and incidents would often take place, which he would have to somehow tolerate.

When Sri Ramanuja came to know that his wife's behavior had offended a Vaisnava, he felt very bad and thought, "She is committing vaisnava-aparadha; she has such an offensive mentality. I must do something about it."

One day, a hungry brahmana came to Ramanuja, asking for some food. Ramanuja sent this brahmana to his wife, telling him, "Go to my home and tell my wife that I sent you. She will give you some food."

When that brahmana came to Ramanuja's wife, she boldly insulted him again and again. She told him he should get out of there, and that there was no food for him.

Returning to Ramanuja, the brahmana reported what had happened, and Ramanuja replied, "Wait here for a few minutes."

He left and wrote a letter to his wife, as though it was written by her father, stating, "O my dear daughter, I am arranging the marriage of my son, your brother. So you should come. Please bring your husband with you."
Writing these words very nicely, he folded that letter and tied it with colorful threads. And, along with that, he sent a coconut and other auspicious items. He then gave that letter to the brahmana and said, "Now go again to my wife. She will welcome you nicely this time. The brahmana went again. After reading the letter, Ramanuja's wife's behavior completely changed. This time she welcomed him warmly and sweetly, and offered him all kinds of palatable food and sweets. When Ramanuja came home, his wife told him about the marriage. She cited her father's request for both of them to come and requested him to please come along.

Ramanuja said, "No, I cannot come, for I am very busy; you may go now with this brahmana. Don't be lat e."

After his wife left with that brahmana, Ramanuja locked the door of his house and went to Sri Rangam to meet his Gurudeva, Sri Yamunacarya. He wanted to take sannyasa from him, but when he reached Sri Rangam, he found that Sri Yamunacarya had just passed away and his disciples were walking in a funeral procession with his divine body. Ramanuja felt very disheartened and sad. He asked them to stop for a moment. He wanted them to uncover the transcendental body so that he could take darsana of his Gurudeva's divine form. He observed that all the fingers on one of his Gurudeva's hands were open, and on the other, three fingers were closed. He inquired from the disciples all around as to why this was, and he wanted to know when it happened.

No one could answer. They said, "We didn't notice it before; it must have happened just now."

Ramanuja became silent, and after some time he spoke, addressing Sri Yamunacarya's transcendental body. He said, "Now, I will first of all write a Vaisnava commentary on Vedanta, and I will preach that Vaisnava commentary throughout India." One finger opened, and Ramanuja spoke further, "I will take tridandi-sannyasa right now, and I will preach the message of vaisnava-dharma and your teachings."

When Sri Yamunacarya heard that, his second finger opened. Ramanuja then said, "I will systematically write about Vaisnava etiquette, explaining the behavior required to execute pure devotional service, and what precautions should be taken. I will also preach this throughout India."

After uttering this third statement, Sri Ramanujacarya observed, along with all present, that three of Yamunacarya's fingers had now opened. Then and there, Sri Ramanujacarya formally accepted tridandi sannyasa from Sri Yamu nacarya.

What is the duty of an ideal disciple? He should not merely stay with gurudeva; he should try to give his energy by body, mind and words, and try to serve him according to his desires. He should not just be present physically, thinking something exciting is going to happen, while remaining unenthusiastic to serve. That is not a disciple, but rather something quite opposite. A true disciple always desires, with heart and mind, to better serve his gurudeva.

Sri Ramanujacarya had now formally taken initiation from Sri Yamunacarya. Afterwards, all the disciples of Sri Yamunacarya, who were great scholars and who had served their Gurudeva for so many years, came together. Having seen the extraordinary characteristics and personality of Sri Ramanujacarya, they collectively decided that he should be appointed as the next acarya after their Guru, and they honored him with the acarya seat in Sri Rangam. Sri Ramanujacarya accepted the orders of his god-brothers, but before sitting and acting as the acarya, he went to each of his god-brothers, for two months, four months, six months, or one year, and served each of them. He thus formally endeavored to understand the teachings of Sri Yamunacarya since he had not gotten the opportunity to spend much time with him. After serving and satisfying them, Sri Ramanujacarya commenced his role as acarya of the Sri Sampradaya in Sri Rangam

We should carefully follow Sri Ramanujacarya's example. Not only should we intimately serve our Gurudeva, we shoul d also respect and properly honor our god-brothers and god-sisters. If someone is senior to us, having served our gurudeva longer, we should show that person great honor. If someone is equal to us, we should give friendly honor to him, and if we encounter someone in an inferior position and who is serious about learning, we should always be merciful. We should try to perform devotional service in a very harmonious way.

When Sri Ramanujacarya officially became the acarya, he began preaching the cult of Sri Yamunacarya very strongly. In South India, two impersonalist sects are very prominent: Saiva and Sankaracarya. Sankaracarya's followers subscribe to the vedanta-sutras like "sarvam kalvidam brahma" and "tat tvam asi." They think themselves impersonal brahma, and they think everything comes from brahma. The Saiva School considers Lord Siva to be the ultimate truth, and they want to merge into him. This is the basic difference between the two. Sri Ramanujacarya refuted and defeated all impersonalism by his very strong and effective preaching.