Vrndavana Is Made Of Srimati Radhika 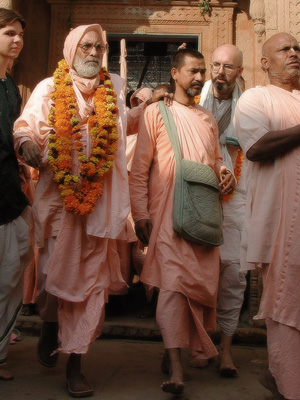 Vrndavana is Radhamayi. It is made of Srimati Radhika, and everyone there is bhava-vibhor, lost in transcendental sentiments. The devotees here have just sung a bhajana in which they prayed, "I don't want to leave Vrndavana", and the main cause of that prayer is the variagated moods of Radhika and their depth of absorption. When Uddhava saw the moods of Radhika at Uddhava-kyeri, he became stunned like a wooden doll. Earlier he had been with Nanda Baba and he was very moved by his moods and amazed by his deep love. However, when he later saw the transcendental ecstasies of divyonmada and citra-jalpa in Radhika, he became stunned in helplessness.

Srila Rupa Gosvami has written, "I am standing on the shore of the fathomless, bottomless, endless ocean of rasa in which there are various ripples and waves, and after seeing it I am explaining a portion of it in Ujjvala-nilamani."

There are various moods in the stage of love in separation called divyonmada. One of the symptoms is that the lover speaks irrelevantly, and this is called citra-jalpa. There are ten categories of citra-jalpa, and one of them is called prajalpa. Prajalpa, in turn, has four symptoms, and they are transcendental envy, disrespect, pride, and ridicule or taunt. The type of speech in which these four are present is called prajalpa. [This is not to be confused with the mundane prajalpa, nor can the other three be compared with their mundane perverted reflections. They are all pure and transcendental, and one who hears about them from the right source becomes purified from the influence of their mundane counterparts.]

In Srimad Bhagavatam, chapter forty-seven, called Brahmara-gita, Srimati Radhika talks to a bumblebee whom She takes as a messenger of Krsna:

["Radharani said: 'O honeybee, O friend of a cheater, don't touch My feet with your whiskers, which are smeared with the kunkuma that rubbed onto Krsna's garland when it was crushed by the breasts of a rival lover! Let Krsna satisfy the women of Mathura. One who sends a messenger like you will certainly be ridiculed in the Yadus' assembly." (SB10.47.11)]

When Uddhava wanted to meet with the gopis to give them Krsna's message, the gopis took him to where Radhika was lying down at a distance. They offered him an asana, but instead of sitting on it he paid his obeisances to it. Uddhava then saw a golden doll, on whose limbs sandlewood paste was smeared, lying on a bed of lotus petals. She was motionless, and all her friends were checking to see whether or not She was alive. She was in such a state that Her friends were completely perturbed, and they could not bring Her to consciousness.

Srimati Radhika was engrossed in a mood in which She was feeling Krsna in Mathura. She was thinking, "Krsna cannot live without women, and therefore He must be associating with the Mathura-ramanis, the beautiful young damsels of Mathura.

Radhika began to experience asuya, envy, towards these city girls. She saw a madhukara, bumble bee, flying around Her feet and thinking they were lotuses. In Her high class of loving mood She thought that the bee was a messenger of Krsna, and in this elevated state of divyonmada She told him, "Don't touch me." Seeing that bee had come to Her in an intoxicated state, She said, "O Madhukara, it appears that My kanta, My beloved, has sent you to pacify Me because He feels guilty that He has committed sins and offences. He therefore wants to plead through you in humble submission.

"O messenger of Krsna, you are just like Him. He is a cunning cheater who deceives people of their wealth, and He is a cheater from all other points of view as well. And you are his bosom friend." Srimati Radhika never called Krsna 'Krsna' directly, but She addressed Him indirectly by the use of other names. She told that bee, "You are the bosom friend of My priya-bandhu who is durta, a cheater, and dhita, stubborn.

The bumblebee replied, "Don't think in that way, Svamini. Krsna loves You and honors You, and therefore He has sent me. He is attached to You and He is very rasika.

Radhika then said, " Be silent. Do you remember what He said during rasa-lila? He said, "O My dear gopis, I was always here. I never left you. I just wanted to see how you respond when I disappear. I pretended to leave in order to increase your love. A poor man may acquire a diamond and think it to be glass. He may thus mishandle it and lose it. Then a friend may come and say to him, 'Oh, where is that diamond I gave you?' The poor man will reply, 'You never gave me a diamond.' The friend will then say, 'I did.' And the poor man will then say, 'Oh, I thought it was glass and I accidentally threw it away.' 'No, it was a diamond.' When thus convinced, that poor man deeply grieves and repents. Therefore, to create a mood of eager longing in your heart, and also to show the world how much berievement My dear gopis feel, I appeared to have left you. In this way the world will come to know the depth of your love."

["I am not able to repay My debt for your spotless service, even within a lifetime of Brahma. Your connection with Me is beyond reproach. You have worshiped Me, cutting off all domestic ties, which are difficult to break. Therefore please let your own glorious deeds be your compensation."]

Radhika continued, "Then, when He left for Mathura He said He would return in two days. But He didn't fulfill His promise. How can you say He is sincere? No, He is a number one cheater. His words are only external. They do not come from His heart. He is madhupa, intoxicated from drinking the wine of the association of the ladies of Mathura. He is apavitra, impure, and I will become impure by your association. So don't touch me. Go away!"

The bumblebee replied, "I am nirdosa, faultless. I am not at all drunk from drinking wine."

Srimati Radhika then said, "Don't cheat me. What is that on your mustache? You were on the garland of Krsna after He associated with different Mathura-ramanis and their kumkuma came off on that garland. It is for this reason that your mustache is yellowish at the ends.

"Krsna has sent you to pacify Me, but I'll not be pacified. You don't know how to pacify someone. Carrying the signs of Krsna's meeting with others is not the right way. You are foolish like your master.

The bumblebee said, "No, He is not like that. If you criticize my master I am leaving.

Srimati Radhika said, "Wait. I want to say something further. Krsna is Madhupati, and that means He is Yadupati. He used to be a gopa, but recently He has changed His asrama. He was a gopa, but since He has taken upanaya-samskara, His sacred thread, in the ksatriya tradition, He is now meeting with the beautiful women of Mathura City.

We are village girls with no education. We are penniless. We are without any wealth. Don't waste your time trying to pacify us. Go to the Mathura-ramanis and they will pay you heavily. They are rich. When Krsna is with one of those women, the others will become manani. They will became angry in jealousy and Krsna will be able to spend His whole life pacifying them; because they are not easy like us. We used to be easily pacified.

"You have said that Krsna loves Me and therefore He has sent you. I am surprised, then, how His messenger can be so stupid; not thinking ahead how I will react to his yellow mustaches. Krsna was the exact same way. He never used to wipe off the signs of having been with other beloveds in Vrndavana, and now He must be going with similar signs into the Yadu assembly. And they must be ridiculing Him there. How can your master be sincere?

In this way, the four symptoms of prajalpa, namely asuya, envy; garva, pride; upahasa, ridicule; and avajna, disobedience; are manifest from the heart of Radhika.