Our Relationship With Balarama 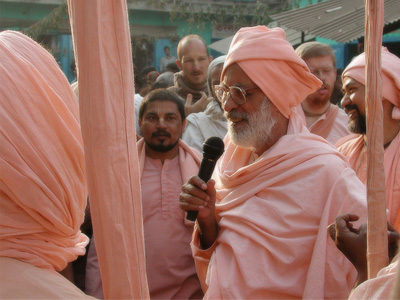 Today is a very auspicious day because two very sacred tithis (days) have met together: Purnima, and the Appearance Day of Baladeva. Today also ends Jhulana Yatra, which has been going on for one month since the beginning of this sravana month. At the end of Jhulan Yatra all Vrajabasis are very sad, and therefore Baladeva Prabhu appears on this day and makes them happy.

Some Vrajabasis hold an opinion that Baladeva appeared after Krsna. They say that Krsna appeared on astami, the 8th moon day, and Baladeva appeared after Krsna on catra, the following 6th moon day. However, Srila Jiva Gosvami, Srila Sanatana Gosvami, Srila Rupa Gosvami, and all our Gosvamis don't agree on this point. They explain that if Baladeva appears on the following 6th moon day, then Krsna will be older than Baladeva Prabhu by several days. Or, if Baladeva came the year before, then He will be almost one year older than Krsna. Therefore, Jiva Gosvami states in his Vaisnava Tosani that, according to Srimad-Bhagavatam, Krsna and Baladeva were both named by Gargacarya on the same day, they were crawling at the same time, their annaprasana (mahaprasada-taking ceremony of any 6 or 8 month old child) was performed on the same day, and all their development took place at the same time. When Krsna took birth in Gokula and Baladeva first saw Him, that was the first time Baladeva had opened His eyes. When Mother Yasoda and Rohini Ma placed Them both on the same hanging swing, they were very much pleased to see each other.

Some say that Baladeva Prabhu and Krsna took birth in Mathura, but this understanding belongs to ordinary persons, not rasika and tattva-jnana bhaktas. They have a different opinion. In Srimad-Bhagavatam and Hari-vamsa it is stated that Devaki is another name for Yasoda. This is written in so many Puranas, and especially in Hari-vamsa.

There was no birth in Mathura. Krsna appeared there as Visnu, as Parambrahma, as a youth of sixteen years. In Mathura He appeared in the form of Vasudeva; He was four-handed and was holding His sanka, gada, cakra, and padma. He had long, wavy hair. He wore sarana-makuta (a golden crown) and He was adorned with golden ornaments. Bhagavan never takes birth, but Krsna is not only Bhagavan; He is Svayam Bhagavan. Srila Visvanatha Cakravarti Thakura has written a sloka that reveals the opinion of Sri Caitanya Mahaprabhu: "Aradhyo bhagavan vrajesa-tanayas tad-dhama vrndavana." First of all, Krsna is Vrajendra-nandana, the son of Nanda Maharaja, and He is our aradhya, supreme worshipable Deity. Tad-dhama vrndavanam. His abode, Vrndavana, is equally worshipable. Lord Sri Krsna and His abode, Vrndavana, are equally worshipable.

This is the idea of Caitanya Mahaprabhu. Krsna is not the son of Vasudeva and Devaki. He is only the son of Yasoda and Nanda Baba. Vrajesa-tanayas means Nanda Baba. Our aradhyadeva is Krsna, and He took birth in Gokula.

Just as Krsna took birth in Gokula, so Baladeva Prabhu also takes birth only in Gokula. He appeared from the womb of Devaki in part, but 'in whole' He took birth from the womb of Rohini, in Gokula. Rohini devi was one of Vasudeva's many wives in Mathura. In Gopala Campu it is stated that when Vasudeva and Devaki were put in Kamsa's jail, she used to go from time to time to visit and serve them there. On one visit she became pregnant, and Devaki also conceived a child at that time. The mula, original and complete, Balarama entered her womb, and His plenary portion was in the womb of Devaki. After two or three months, in order to protect Rohini from the atrocities of Kamsa, Vasudeva sent her to Vrndavana to live in the home of Nanda Baba and Yasoda; Yogamaya had inspired him to do so. After Baladeva's plenary expansion had been in Devaki's womb for six months, Yogamaya took Him from her womb to Gokula, where she put Him in Rohini's womb, and both the plenary portion and original Balarama merged there. It appeared, and everyone thought, that Devaki had a miscarriage, but actually that plenary portion had been transferred to Rohini's womb. As a magnet attracts iron, so the original Baladeva attracted His own expansion. Eight months later, Rohini begot her son, and therefore, all in all, Sri Baladeva had been in her womb for fourteen months.)

When Krsna appeared as Vasudeva (His four-handed plenary expansion in Mathura) Vasudev and Devaki prayed to Him, "Please appear as a very little boy, and then we can try to save You from Kamsa." At that time Krsna, who had just taken birth from the womb of Yasoda, at once came to Mathura and took chatur-buja (four-handed) Krsna in Him and both mixed. Vasudev took this baby Krsna to Gokula, left Him there, and took Yogamaya [Krsna sister, who had also just taken birth from Yasoda's womb along with Him]. Similarly, we should know that Rohini's son Baladeva Prabhu's plenary expansion was present in the womb of Devaki, and by the arrangement of Yogamaya, was carried to Gokula. Both 'mixed together' there, as Rohini-nandana.

Balarama always thought, and He was in the mood, that His father was Nanda Baba - not Vasudev Maharaja. He never thought, "I am the son of Devaki and Vasudeva." Mula Sankarsana is Baladeva in Dvaraka or Mathura. Baladeva in Gokula or Vraja is not Mula-Sankarsana; He is different. In tattva They are both one, but by rasa-vicara (consideration on the basis of rasa) They are not one. When Krsna appeared in Mathura He was not the original Krsna, but Vasudev-nandana. Similarly, when Baladeva appeared in Mathura, He was not Rohini-nandana, but rather Mula-Sankarsana. In both Dvaraka and Mathura He is Mula-Sankarsana, a partial manifestation of Baladeva Prabhu. From Him, Maha-Sankarsana in Vaikuntha is expanded, and from Him, Karanadakasayi Visnu comes. From Karunadakasayi Visnu, Garbodakasayi comes, and from Garbodakasayi comes Khirodakasayi Visnu. The last fraction of Maha Sankarsana is Ananta Sesa. All these expansions have the mood to serve Krsna, and they are serving Him.

Baladeva and Krsna are the Same

There is no difference between Krsna and Baladeva. Krsna is Svayam-rupa, and Baladeva Prabhu is also like that - but still He is Krsna's prakasa or manifestation. There is only some difference in color and paraphernalia. Baladeva never carries His hala and mussala, plow and club, in Vraja; and Krsna also never carries any weapon there. He only carries His vamsi, and Baladeva Prabhu carries only His sringar (buffalo horn). Sometimes Baladeva also carries a vamsi, but the vamsi is not prominent. Krsna also carries a sringar, but the vamsi is prominent for Him. By that vamsi Krsna performs rasa-lila and all similar pastimes.

Baladeva does not keep a plough or club because there is no use for them in Vraja, where all His lilas are madhura, sweet. He is not married in Vraja, and Krsna is also not married there - openly. Both of Them only engage in Their sweet lilas there. In Dvaraka however, it is Vasudeva-nandana and Devaki-nandana who appear. 'Vrndavana parityaja padam ekam na gacchati.' It is not only the part of Krsna, but also the part of Baladeva Prabhu, who go there. Baladeva Prabhu also never leaves Vrndavana. He always lives in Vrndavana.

Krsna is a made of sat, cit, and ananda. The meaning of sat is sattva, the existence potency. Cit here means bhava, transcendental loving emotions manifested in the five rasas. In the ordinary sense it is taken as jnana, knowledge; but there is no jnana in that sense in Vrndavana. In Srimad Bhagavatam it is stated:

["My dear Lord, those devotees who have thrown away the impersonal conception of the Absolute Truth and have therefore abandoned discussing empiric philosophical truths should hear from self-realized devotees about Your holy name, form, pastimes and qualities."]

If you want to serve Krsna and Srimati Radhika in Vraja-bhava, you will have to leave jnana. You will have to try to hear only the pastimes of Krsna, to remember them, and to chant the names of Krsna and Radhika. Otherwise, if you are not ekantika, one pointed, you cannot approach Vraja. When tattva-jnana becomes bhava, that bhava can reach to Vrndavana, and we can serve in Vraja with that bhava. In the ordinary sense jnana is only in relation to Brahman. Those who are jnanis think themselves Brahman. When jnana is tattva-jnana, realization of Bhagavan, one can go to Vaikuntha but he cannot reach Vrndavana. Here jnana (as cit) means the bhava experienced in the five rasas: santa, dasya, sakhya, vatsalya, and madhurya. This is called samvit, the knowledge potency, the potency by which Krsna knows Himself and by which others know Him.

The essence or sum and substance of hladini is called prema, and prema personified is Srimati Radhika.

Sat-cit-ananda. Sat is the existence potency. The jiva is also ever-existing, but Baladeva is the master of all. He is the personification of sat; He is the original existence potency. We see Krsna, we see His vamsi, we see all the Vrajabasis, we see this world and we see the jivas. All are expansions of Baladeva Prabhu. Krsna, with Baladeva and Radharani, is Vrajendranandana Syamasundara. Without Baladeva there would be no existence of the pastimes of Radha-Krsna and the gopis, and no existence of the land of Vrndavana, because He is the existence potency. All the associates of santa, dasya, sakya, and vatsalya rasas are manifestations of Baladeva. Regarding madhurya-rasa, those gopis who are kayavyuha-rupa, bodily expansions of Srimati Radhika, are Her manifestations. Baladeva serves in all rasas, but not in sringara or madhurya-rasa. To serve in that rasa He takes the form of Ananga Manjari.

Our Root Cause is Baladeva

The root of all jivas, the cause of all jivas, is Baladeva Prabhu. In Vraja, the jivas have manifested from the original Baladeva. They have never come to this world. They have always served Radha and Krsna in madhurya-rasa or sakhya-rasa. From Baladeva comes Mula Sankarsana in Dvaraka. Asanka (innumerable) jivas come from Baladeva in His form as Mula Sankarsana, and they serve Dvarkadhisa and Mathuresa Krsna in so many ways. From Mula Sankarsana comes Maha Sankarsana in Vaikuntha. He manifests the mukta-jivas there, and they eternally serve Rama, Nrsmha, Kalki, Vamana, Narayana and all other svansa incarnations. From Maha Sankarsana comes Karanodakasayi Visnu in the tatastha region, and He manifests the tatastha-jivas. Among them, some become free from maya and some become baddha-jivas, conditioned souls. In this way, we see that all kinds of jivas have come from Baladeva.

It is told like this in the scriptures, but actually there is no birth of the jivas. They are all eternal, like Baladeva Prabhu Himself. This is only said to convince ordinary jivas, conditioned souls. There are so many things that sastra has told us, whereas in reality, in Goloka Vrndavana dhama, these things will be seen in another way.

[extra note: Someone may say that Baladeva was in the womb of Rohini in Mathura, and at that time, therefore, He was out of Vrndavana. But this is not true. Rohini is a visuddha Vrajabasi. She is always in the consciousness that, "I am a Vrajavasi." Even when Nanda Baba and the cowherd boys went to Mathura with Krsna, they were still in Vrndavana because their consciousness was such. Yogamaya Paurnamasi apparently lived in Ujjain before moving to Vrndavana, but actually she is an eternal visuddha Vrajabasi. Rohini apparently came from Mathura, but she is also an eternal visuddha Vrajabasi. Therefore, when Rohini-nandana Baladeva appeared in her womb, He was in Vrndavana. - Madhava Maharaja]