The Appearance Day Of Srila Prabhupada 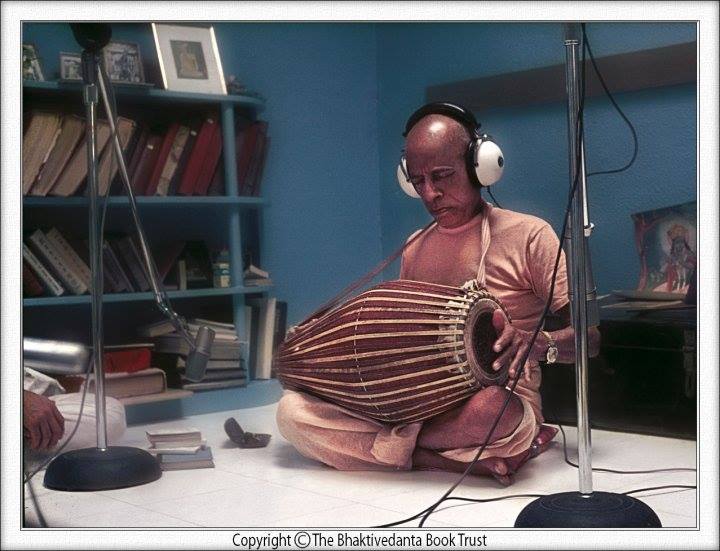 [On August 13, 2001, at Sri Kesavaji Gaudiya Matha in Mathura, India, where Srila Prabhupada took sannyasa in 1959, a festival was held in glorification of his divine appearance. Devotees from various western countries and several cities of India, along with local brahmacaris and sannyasis, attended the festival. Srila Bhaktivedanta Narayana Maharaja was the main speaker, and he also requested senior disciples of Srila Prabhupada to speak. The following is a transcription of Srila Maharaja's puspanjali speech:]

Today is the auspicious birthday of nitya-lila pravista om visnupada Sri Sri Bhaktivedanta Swami Maharaja Prabhupada. Jagat-guru nitya-lila pravista Sri Srimad Bhaktisiddhanta Sarasvati Gosvami Thakura Prabhupada, following the order of Srila Bhaktivinoda Thakura, wanted the glories of Sri Caitanya Mahaprabhu, Nityananda Prabhu, and krsna-nama-sankirtana to be preached all over the world. He therefore ordered His disciple, Srila Swami Maharaja, "You should preach throughout the Western countries." Sometime after that Srila Swami Maharaja came to our reverend Gurudeva, om visnupada Sri Srimad Bhakti Prajnana Kesava Gosvami Maharaja, and took sannyasa from him here at Sri Kesavaji Gaudiya Matha. After that, he began his preaching in the West.

In a very short time your Prabhupada translated so many books, and he very quickly established Krsna Consciousness everywhere in the world, from corner to corner, in the forests, hills and mountains, and in so many prominent cities. His books were distributed everywhere by very beautiful teenage girls, in seaports, airports, hotels, and railway stations. Young energetic boys, who were formerly hippies, became 'happies.' I think that all the credit for the preaching and krsna- nama-sankirtana in the world nowadays goes to Srila Bhaktivedanta Swami Maharaja, and the seed and root of this preaching are Srila Bhaktivinoda Thakura and Srila Prabhupada Bhaktisiddhanta Sarasvati Thakura.

Also, the credit for being like the sprout of this preaching goes to my Gurudeva, Srila Bhakti Prajnana Kesava Gosvami Maharaja. If my Guru Maharaja had not given Srila Swami Maharaja the renounced order, how could he have traveled throughout so many countries and very soon, in a couple of years, establish Krsna Consciousness there?

I will speak something of his glories, but first I want that one of his senior-most disciples, Jadurani, nick-named by me 'Syamarani,' should stand up and glorify Him, offering her puspanjali at the lotus feet of her Gurudeva. I want to tell you that she is, and we are all, truly in ISKCON.

[Syamarani dasi:] In 1968 I was in Srila Prabhupada's quarters in Boston, with one or two other devotees. After he answered my question very brilliantly as usual, I said to him, "Gee, Prabhupada, you know everything." He replied, "Yes, unless one knows everything, how can he be a teacher?" So today I want to discuss that small yet esoteric aspect of Prabhuapda, and that is his omniscience.

If we accept Prabhupada as an ordinary jiva, this cannot be understood, but if we accept him as a manifestation of Krsna, it is easily understood. In the first chapter of Caitanya Caritamrta Adi-lila, it is stated that the self-realized diksa-guru is a manifestation of the form of Krsna. Krsna takes the form of the guru to deliver His devotees. The same chapter states that the self-realized siksa-guru is a manifestation of the personality or nature of Krsna. In this world Krsna takes two forms. He takes the form of the Supersoul and that of the topmost devotee. There it is also stated that the bona fide guru is not to be envied as an ordinary man would be envied, for he is the abode of all the demigods.

Four years ago in Holland one of the devotees who was working with the gurukula asked Srila Gurudeva the controversial question regarding whether Prabhupada did or didn't know about the mistreatment in gurukula. He replied that the question was so important that he would spend his entire evening class explaining the answer.

[Srila Narayana Maharaja:] Some persons doubt that Srila Bhaktivedanta Swami Maharaja was tri-kalajna, omniscient. They question that if he was omniscient, how could he have given the renounced order to so many disciples who have either fallen down or will fall down very soon. They say that it seems as though he never knew what would transpire in the future. Many ISKCON leaders are thinking that he was not omniscient, and that is why he gave sannyasa to many who later went to hell.

Those who think that he was not omniscient or that he made mistakes are wrong. They are totally wrong. They are not initiated in the real sense, and they cannot understand things properly because they are not associated with any high class of Vaisnava.

You are familiar with the history of Sri Ramacandra. Sita saw a deer grazing and She requested Rama to capture it. Rama then followed the deer for miles and miles, and finally He shot it. That deer was the demon Marica, and as he was dying he called out in Rama's voice, "O Laksmana! Save me! Save me!" As a result of this incident, Sita was kidnapped by Ravana.

Rama is omniscient. Why did He not know beforehand that Sita would be stolen by Ravana if He would pursue the deer? Why could He not have known? Why did He have to send Hanuman and others to search for Sita? Laksmana is akanda-guru-tattva, the personified principle of undivided or complete guru. Why did he leave Sita and then have to search for her?

In this regard one may also doubt Krsna and question: Why did Krsna do so wrong? Why could He not have warned the young Yadus when they presented the so-called pregnant 'girl' before the sages? Did He not know that the incident would later be the cause of the Yadus' fighting together and killing each other? If He knew, why did He not warn them? He could have prevented them all from dying.

Krsna knew, and Ramacandra knew. They both knew everything, but They were engaged in naravat-lila, human-like pastimes, playing the role of human beings. Whatever They did was for the welfare of the universe. Srila Swami Maharaja is a manifestation of Krsna, and whatever he did was also for the welfare of all. Foolish persons cannot reconcile all these things. Such persons are fallen souls. They are not actually sannyasis.

Now I will request another of his sincere and senior devotees, Vrndavana Vilasini devi dasi, to speak.

[Vrndavana Vilasini dasi:] Krsna is not only rasika-sekhara (the enjoyer of transcendental mellows); He is also parama-karuna (most merciful). He came as Caitanya Mahaprabhu, in the guise of a simple Gaudiya Vaisnava, and His real identity was concealed. Similarly, Srila Bhaktisiddhanta Sarasvati Thakura Prabhupada wanted to manifest the real identity of our Srila Prabhupada.

At first Prabhupada acted as a follower of Gandhi, and his real identity was hidden. It was at this time that he first met Srila Sarasvati Thakura who told him, "You are an educated man. Why not preach in the West?" Prabhupada remained in the guise of a householder for some years after that, and then, just two weeks before his disappearance, Sarasvati Thakura reinforced his order that Prabhupada preach in English. He wrote him, "It will be good for you, and good for the world."

For some time his real identity remained hidden, and hardly anyone in the world knew who he was. Later on Krsna took everything away from him, his family, money and his business, and at that time another person who knew his identity, Srila Bhakti Prajnana Kesava Gosvami Maharaja, became his sannyasa guru. It was in Srila Bhakti Prajnana Kesava Gosvami Maharaja's temple in Mathura that he took the sannyasa order, and also, at that temple, Prabhupada translated the first three volumes of Srimad Bhagavatam and wrote his booklet, "Easy Journey to Other Planets."

When the time was right, his real identity still concealed, he left for America on the order of his Guru Maharaja. At this time he had no disciples, no followers, no money, and no friendly supporters, and there was only one person that went to see him off as he headed for America. He apparently had nothing, but that was because Krsna wanted to demonstrate to the world the power of the pure devotee who is eka-nistha, one-pointed, in his devotion to guru and Krsna.

Then, when Prabhupada arrived in New York, his sponsor had only sent a representative from traveler's aid to meet him, and therefore he went alone to Pennsylvania by coach.

In that decade, the 1960's, Yogamaya had arranged an astonishing event, and that was the 'hippy explosion.' Before this new era, all the young Americans were 'straight Americans,' but this hippy movement made them throw out the rules and regulations of middle-class America and look towards the East for answers to their own and the world's problems of life. They tried drugs, and they tried yoga, among other things.

Prabhupada came right at that time. Playing on small karatalas and with his eyes closed, he would chant and dance. He gave prasadam to those who came to join him, and he also taught them the art of making prasadam. He won their hearts.

In twelve years he conquered the world, but his real identity was still unrevealed. Just before he left, from his disappearance bed, he requested Srila Gurudeva, Srila Bhaktivedanta Narayana Gosvami Maharaja, to take care of his disciples and followers. Srila Gurudeva couldn't refuse his request, otherwise we would have spiritually died. Then, in 1996, Prabhupada insisted that Gurudeva preach around the world as his bona fide representative. To this day Prabhupada's real identity remains concealed to most, but Srila Gurudeva is not only teaching that by bhajana he will reveal himself, but on Prabhupada's order he is also teaching how to do bhajana.

[Srila Narayana Maharaja:] After a few minutes we'll have to take paran, (Paran is the prasadam taken to break a fast. If one has honored any prasadam on the fast day, then the paran must be a grain, otherwise not. Paran must be taken at a specified time, otherwise the result of the fast, bhakti, will not be achieved.) or else all our austerities will go in vain. I request, therefore, that we now offer puspanjali to the lotus feet of Srila Swami Maharaja, and then aratika. Tomorrow morning from six to eight, and again in the evening from five to eight, devotees will present their offerings of glorification at his lotus feet. All of you should be prepared.