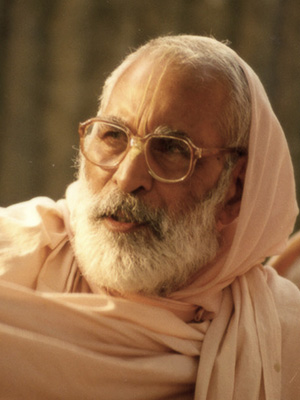 [For the Purusottama Masa (lunar leap-month)  of 2001, Sirla Narayana Maharaja took a parikrama party of devotees from around the world to Sri Caitanya Mahaprabhu's pastime places in Sri Purusottama-ksetra, Sri Jagannatha Puri, for about two weeks. The parikrama went out daily from Sri Nilacala Gaudiya Matha, on the shore of the Indian Ocean and just next door to srila Haridasa Thakura's Samadhi.

For the Purusottama Masa of 2004, the parikrama went out from Sri Caitanya Gaudiya Matha, just down the Grand Road from Lord Jagannatha-deva's Temple, and which is also the divine appearance place of Srila Bhaktisiddhanta Sarasvati Thakura Prabhupadas. On the eve before this  parikrama began, Srila Maharaja explained the general history and significance of this month, as he did previously in 2001.

[In 2001, as kirtana was ending, a pujari from the Jagannatha Mandira came up to the stage where Srila Narayana Maharaja was seated, put a garment from Jagannatha-deva around his neck, tied it with a knot, offered his obeisances, and left. Later, as the program continued, Srila Maharaja called on his sannyasa disciple, Sripad Madhusudana Maharaja, to shed light on the meaning of Purusottama Mas (Month). Madhusudana Maharaja spoke in Hindi, and his explanation was translated by Sripad Madhava Maharaja.]

Smarta brahmanas call this month 'Mala Mas', the rejected month, because there is no need for it. It is extra. Vaisnava sastra, however, calls this month Purusottama Mas. The history is that the personified Mala Mas, being very disturbed, went to see Lord Visnu and said, "No one wants to do any good deeds in my month. What can I do?" Lord Visnu took him to Lord Krsna who told him, "Don't worry. I will become the presiding Deity of your month and give it my name." This month then became practically as auspicious as Karttika, and Mala Mas became happy. The niyama-seva, rules and regulations and prescribed duties, of this month are the same as those of Karttika.

[Srila Narayana Maharaja (speaking partly in English, partly in Hindi, and partly in Bengali):] I remember when I used to come with my param-aradyatama (most worshippable) Sri Gurudeva and his disciples to Purusottama-ksetra during the Ratha-yatra Chariot Festival, and after that we all returned here for one month to observe Purusottama-vrata, the vows of this month. Along with Gurudeva were many of his god-brothers who were prominent disciples of Srila Prabhupada Bhaktisiddhanta Sarasvati Thakura. From here we went to all the places of Caitanya Mahaprabhu's pastimes. We heard hari-katha three times each day, twice in the morning and once in the evening, and it was very, very wonderful. Whatever I have heard from their mouths, and especially from my Gurudeva, I am now telling to you.

Tomorrow morning, after mangala-arati and kirtana, we will go to the Gambira, and from there we will go to Srila Haridasa Thakura's bhajana-sthali. Western devotees should not be worried that they are banned from entering Jagannatha's temple. You can see Patita-pavana Jagannatha-deva at the doorway and pray to Him from there.

It was here in Purusottama Dhama that Srila Rupa Gosvami established the mano'bhistam of Mahaprabhu. He established the identity of Caitanya Mahaprabhu and also that of Radha-Krsna. If he had not done so, no one would have known.

Lord Krsna plus Srimati Radhika's inner mood and gaura-kanti (golden complexion) is Sri Sacinandana Gaurahari. When Sacinandana Gaurahari is minus that golden beauty and intrinsic mood, He is Krsna. Mahaprabhu came to this world to taste the essence of prema and to give raga-marga-bhakti to the world. We have called you all from so many places around the world. Why? In this way we will explain to you the moods of Sri Caitanya Mahaprabhu, and how He wanted to give raganuga-bhakti and especially rupanuga-bhakti, the service to Srimati Radharani.

We have no direct relationship with Krsna. Our svamini is Srimati Radhika. Our relationship is with Her, and Krsna is Her most beloved. We will explain this principle for the next 15 days, and if you are qualified to accept a sprinkle of what Mahaprabhu wanted to donate, your life will be most successful. That is why I have called you here.

We will discuss what Mahaprabhu did in Navadvipa and Godavari, how He tasted Radha-bhava in the Gambira, what He donated to the animals in Jarikhanda, how He made elephants maddened in love, and how He changed the hearts of tigers, bears, and deer, and made them all friends. Such is His mercy. This is the nature of Lord Krsna. Krsna is love and love is Krsna. .

We see nowadays, in the name of religion, "We should destroy all those who do not want to be in our religion." Real religion never gives such teaching as this. Now there are terrorists all over the world, and they want to destroy all those who do not surrender to them and their conception of God. Sri Caitanya Mahaprabhu never killed anyone, and even when Krsna and Rama 'killed', They gave salvation and love and affection. But what can the terrorists give? They are in fact against religion. I pray to Krsna to change them. We should pray to Krsna to give love and affection to all; to every tree and every creeper. Krsna is very powerful and He can do so.