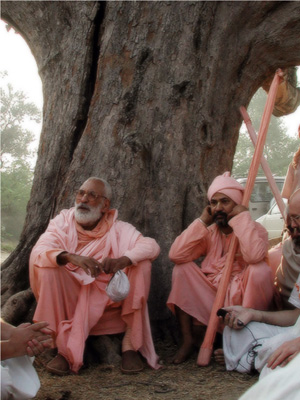 [Srila Narayana Maharaja:] Sri Rupa-manjari is in Krsna-lila and Srila Rupa Gosvami is in Caitanya-lila -- both forms are eternal and transcendental. If anyone wants to serve both, this will be very good. Otherwise, one can worship according to his own process of bhajana.

[Ramesh dasa:] You mentioned two forms -- Rupa Gosvami and Rupa-manjari. Does that mean that Rupa Manjari is higher because this is his eternal form?

We can only see, "He is a lusty person, he is a bad person, he is duplicitous." We can see this, but we cannot perceive transcendental things. We will have to wait for that time, and we should do bhajana to attain the qualification for that. First we should try to be like Srila Rupa Gosvami and Srila Sanatana Gosvami.

[Aranya Maharaja:] Gurudeva, I have a question. I became the object of criticism because I recently sang the kirtana, 'Dekhite dekhite' by Srila Bhaktivinoda Thakura. Some devotees criticized that.

[Srila Narayana Maharaja:] We should not sing this kirtana in the general public. This is our fault. We should only discuss these things very privately, in our group.

[Aranya Maharaja:] I was not explaining anything. Besides, every day, on your request, we were singing this kirtana; Sri Radhikastakam by Krsnadasa Kaviraja Gosvami; kunkumakta-kancanabja-garvahari-gaurabha..

[Srila Narayana Maharaja:] Most persons don't know anything. They don't know the meaning of this song at all.

[Aranya Maharaja:] I think that this kirtana is higher than the other one.

[Srila Narayana Maharaja:] Yes, we are begging mercy only for this. I sing this In India, but only with senior devotees -- not junior. If junior devotees are singing, I stop them; but with those who are advanced, like Kanai and Mukunda, I allow it. We should see the atmosphere, otherwise others will criticize us. Even Mahaprabhu was criticized. He was with a brahmana boy, and Damodara Pandita told Him, "All will know Your 'sannyasi' mood -- that You are having love and affection for a widow's son." There are so many things about which to criticize, and some persons will criticize. We should try to avoid this.

[Aranya Maharaja:] We hear many times that Govardhana is higher than Vrndavana. The sadhana-siddha devotee cannot go to Govardhana, what to speak of Radha-kunda. It is so high. If anyone leaves his body and enters the pastimes of Radha and Krsna, being sadhana-siddha, does this mean that in this life they will not be able to go to Govardhana and Radha-kunda? Do they have to wait until they become a parikara (Krsna's associate), and then go there?

[Srila Narayana Maharaja:] This is not written anywhere. We should try to reconcile. We see that even Hanuman is there. He brought Govardhana to Vraja. How can we deny that a sadhana-siddha can go there?

[Aranya Maharaja:] Hanuman is there, but we say that Govardhana is higher than Vrndavana because sadhana-siddhas cannot enter the rasa dance at Candra Sarovara.

[Srila Narayana Maharaja:] Why can't sadhana-siddhas go? A sadhana-siddha is like a gopi. If he is sadhana-siddha, he can also go to Radha-kunda. Rupa Gosvami and Raghunatha Gosvami have explained this. If we want to take shelter of Radha-kunda and Syama-kunda, can we be denied? Will Govardhana deny us, saying, "You should not come to Me"? If any bogus person or lusty person goes there and does parikrama, can Govardhana deny him to come?

[Aranya Maharaja:] He can go there with his physical body, but...

[Srila Narayana Maharaja:] At that time also, if he has taken shelter. Govardhana is so merciful. He can give a chance -- no harm.

Last night we discussed Sri Sanatana-siksa, the process of bhakti, Upadesamrta, and other topics. Don't jump. This is topmost, but don't tell all these things to common persons. Especially, a male should not speak about this to young ladies.

[Aranya Maharaja:] Every day you give class here, and then afterwards I give class. I give the same class as you. I just repeat everything, clearing some points and questions, and only taking your remnants.

[Srila Narayana Maharaja:] That you should do. If you are alone anywhere, you should also do that. Discuss what I discuss everywhere. Only sadhana, and sometimes something about our objective.

[Devotee:] Sripad Aranya Maharaja asked about Radha-kunda. Can we, in our japa, picture ourselves sitting there?

[Srila Narayana Maharaja:] As you like. According to your stage. But why not do other things? Sadhana bhajan, loud kirtana? Why do you want to jump?

[Devotee:] We have to do everything.

[Srila Narayana Maharaja:] Not everything. If you jump you will fall down. Do your practices from the beginning. Anartha nivrti. You should try to take what is favorable to the process -- very strongly. And give up unfavorable things very strictly. Try first to control krodha-vegam, jihva-vegam, and udaropastha-vegam. You should try to do this.