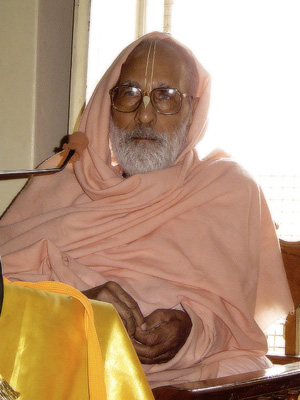 What is the proper way to utter the name of your gurudeva? If you are offering pranama to him, should you hold your hand in your japa bag and say, "Namah om visnupadaya krsna presthaya bhutale sri srimad bhakti prajnana kesava gosvami iti namine"? What is the proper etiquette? Among the sixty-four limbs of bhakti, the first ten are for guru. Do you remember what they are?

Srila Narayana Maharaja: If you want to utter the name of your gurudeva with honor, will you say, "Kesava Maharaja," or "Bhaktivedanta Maharaja"? No; this is an offence. To give proper honor, we say, "Nitya-lila pravista om visnupada Sri Srimad Bhakti Prajnana Kesava Gosvami Maharaja," with folded hands and deep respect. If we do otherwise, it is an offence. It means we have no regard for gurudeva.

This same principle applies for sankirtana. If kirtana is going on, and instead of participating you chant on your mala, you are insulting sankirtana. When you chant alone, it is not called sankirtana. If you chant with all the devotees, have regard for all; otherwise bhakti will go away.

We should try to follow the first ten principle limbs of bhakti, the foremost of which is visrambhena guroh seva. One must serve gurudeva, not only by words, but also by actions, inwardly and outwardly, and by every means. We should try to serve our gurudeva even more than we serve Radha-Krsna conjugal, because he has given us knowledge of Krsna. What is the meaning of visrambhena?

Srila Narayana Maharaja: Like a dear friend, but still maintaining honor and respect for him. When we serve a friend, some intimacy is there. At present we must perform arcana-marga and serve with reverence, not fully as a friend. When we advance, crossing the territory of vaidhi-bhakti, then we embrace him like a friend; otherwise not. We are in vaidhi-bhakti, and therefore we should honor both our diksa-guru and siksa-guru.

If you perform the other limbs of bhakti, but you have no honor for the Vaisnavas, then everything is spoiled. "Bimala vaisnabe, rati pajibe, basana hoibe ksina."

Srila Narayana Maharaja: I want to explain the meaning of this kirtana. Srila Bhaktivinoda Thakura is praying, "O Hari!" Hari means Krsna. "O Krsna! O Hari!" Caitanya Mahaprabhu also prays, "O Hari!" Because Srila Bhaktivinoda Thakura is gaura-sakti, the transcendental energy of Sri Caitanya Mahaprabhu, he also prays, "Hari, Hari! O Sri Caitanya Mahaprabhu! Sacinandana Gaurahari! Nityananda Prabhu! O Radha and Krsna! When will I be fortunate to have such a day? Bimala vaisnabe, rati upajibe, basana hoibe ksina. When will I have rati?" Rati means so much more than 'regard,' and it comes after sraddha, nistha, ruci, and asakti. "When will a day come when rati for the lotus feet of the Vaisnavas will come in my heart? At that time I will honor and serve them.

Basana hoibe ksina. "At that time all worldly desires will go away." Two material propensities will especially disappear, namely lust and anger. Lust and anger are the root of all evils. If these two are in our heart, our heart cannot be touched by bhakti.

Antara-bahire, sama vyavahara. At that time, inwardly and outwardly, our mind and actions will be the same. Our behavior will correspond to our thoughts. We will not engage in any duplicity, hypocrisy, or politics. Amani manada ho'bo'. We have previously explained the words, amani manada. We will give respect to others according to their level of bhakti, and we will think, "I am insignificant, and I have no qualities at all."

Srimati Radhika is the highest lover of Krsna, and yet She thinks, "I'm the lowest. I have no love and affection for Krsna." She wants to be like the deer, the clouds, the cows and so on, thinking them more advanced in bhakti than Herself. If you have no honor for the Vaisnavas, and especially for pure Vaisnavas, bhakti can never come. Her shadow may come, but pure bhakti will not. If pure bhakti comes, you will have no desire to be honored by anyone. You will genuinely feel, "I am not honorable. I am insignificant."

Krsna-sankirtane, sri-krsna-smarane, satata majiya ro'bo. Wherever your guru and superiors are present and they are performing kirtana, should you be tatastha, neutral? Never. If you are neutral, chanting "Hare Krsna, Hare Krsna" on your japa mala while kirtana is going on, this is not good. You should be absorbed in kirtana yourself, and be in that party. You should dance and sing like Mahaprabhu, and become totally absorbed in krsna-smarana. "When will the day come that I will be like this?"

Pundarika Prabhu: In this line Srila Bhaktivinoda Thakura is aspiring that all the activities of his body will go on by themselves. "As one breathes and doesn't have to pay any attention to it, so let all the dealings of my body and related subject matter be carried out like this, and let me simply be absorbed in bhajana."

Srila Narayana Maharaja: Let my whole attention be towards nama-sankirtana, remembering Krsna, without two minds. Let me engage my mind and everything there, so that maintenance becomes secondary and happens automatically.

Bhajaner jaha, pratikula taha, drdha-bhave teyagibo. Whatever we do that is pratikula, unfavorable, for bhakti, should be at once rejected. We have so many desires. We should very forcefully reject those activities which are not favorable for bhakti, and we should adopt wholeheartedly that which is favorable.

Bhajite bhajite, samaya asile, e deha chadiya dibo. Continuing to do bhajana, a time will come when I will give up my body like a garment, without any pain and without praying, "O Krsna, save me, save me. I'm going to die. O Krsna, I don't want to die." Bhisma-pitamaha very happily left his body. He was so qualified that he received a boon that he would not die unless he wanted to. He left his body because Krsna was there in front of him, and he was absorbed in Him. He was like Srila Haridasa Thakura, and we should also try to be like that.

Bhakativinoda, ei asa kori', basiya godruma-bane, prabhu-krpa lagi. Srila Bhaktivinoda Thakura prays, "I am sitting in Godruma, chanting and remembering with this hope. I am awaiting the mercy of Krsna and the mercy of Godruma-Kunja-Pati Sri Caitanya Mahaprabhu. I remain alive only in the hope that Caitanya Mahaprabhu's mercy will be upon me."

Srila Narayana Maharaja: Devotees should be like him. If we are not, we cannot have bhakti. Don't be attached to worldly desires. Bharata Maharaja was such a high-class devotee, and he had even entered rati-avasta, bhava-bhakti. He fell down from there because of some attachment, but only for three lives. Srila Visvanatha Cakravarti Thakura has explained that actually he was liberated, but by the wish of Krsna he was playing a role of being attached. At our stage, however, we must be very careful.

Our objective, to serve Radha and Krsna Conjugal and especially to become the dasi of Radhika, is very high. Our objective is all right, but how to achieve our objective should be the object of our attention. We should do what is favorable according to our stage, without going beyond this.

Try to forget your worldly desires. For the five or six days that we are here, be brahmacari and exhibit good character. Don't go to restaurants and here and there. Don't play ball. Be careful. Your watch should continue for three, four, five, or six months. Do you understand what I am saying?

Aranya Maharaja: If you have a clock, you have to wind it up. If you wind up the clock, it will keep running for so many days. Gurudeva wants to wind up everyone's clock so that they will be doing very good sadhana-bhajana for at least six months or one year, until the devotees meet him again.

Srila Narayana Maharaja: Again we will meet, and again I will wind up your clocks. My Gurudeva used to do this three times a year.