Calling Us To Govardhana

[In this lecture from 2002, Srila Gurudeva, Srila Narayana Gosvami Maharaja, speaks about Govardhana after having just arrived there.]

Only I was lamenting, because although I invited you all, and you came from all over the world – from East and West, and from South and North – I was not with you. I was lamenting that I was missing your company, your good association. I was lamenting so much for that.

But today, I am so happy to see all of you. I used to meet you when I was traveling throughout the world – from East to West, and everywhere. I used to very easily meet you there. So today I am very lucky that you are assembled here in Govardhana, and that our parikrama is going on well and being managed nicely. So much blessings to you all, and among you I have particular blessings for Premananda, Tirtha Maharaja, Vana Maharaja, Aranya Maharaja (now Prema-prayojana dasa), Rasananda prabhu (now Sripad Sridhara Maharaja), Padmanabha Maharaja, Sadhu Maharaja, Asrama Maharaja, Purandara prabhu (now Sripad Narasimha Maharaja)... all!

Premanandaji is managing the main thing; everything is in his hand. If he stops, then everything will stop. You are giving so much high-class hari-katha, but if you become hungry you are not able to do anything. He is managing the power – the prasadam – and therefore my special mercy is upon him.

When we started with Gurudeva, there were so many devotees – about five hundred – walking on foot the entire way. At that time he made me the all-in-all responsible for Kesavaji Gaudiya Matha. Then, after his physical departure from the world, we began with only nine or ten devotees. Tirtha Maharaja was also there. 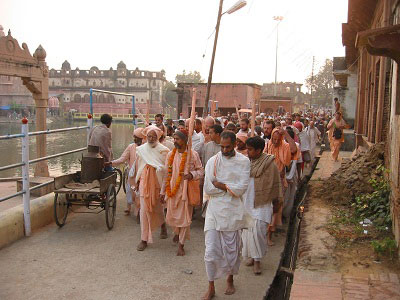 Manasi-ganga parikramaNow I see that you are more than five hundred, and more will come from Delhi, and Mathura to Govardhana. At least two hundred more will come.

I hope that now I will complete the books that I have begun. Very soon Bhakti-rasamrta-sindhu, Ujjvala-nilamani, Brhad-bhagavatamrta, and so many other books will come. Bhajana-rahasya also will come. I am very happy that Krsna has arranged everything very well. 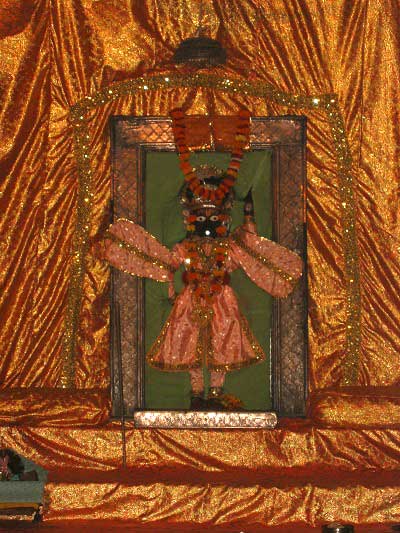 HaridevaToday at about seven, we will do parikrama of Manasi-ganga. First we will go to Harideva, because He is the predominating Deity of Giriraja. Then we will go to Brahma-kunda, where Brahma performed austerities for several years. Then we will take the water of Manasi-ganga at Paranga-ghata. There, Krsna came disguised as a boatman and told the gopis, "Oh, come on! I will very quickly take you to the other side. My boat is very, very good, and new; and also I am very strong and expert boatman."

The gopis were somewhat afraid because it was becoming very late in the evening; so they entered the boat, and Krsna took it in the midst of Manasi-ganga. Then, once there, He told them, "My boat is old and has some holes in it. And I am very weak. I am not a good sailor."

Then, as His boat began to rock up and down, He told them, "You will have to give up all of your yogurt pots." And they did this. Then He said, "Your ornaments are very heavy. You will have to throw them overboard as well." And thus He did so many things. 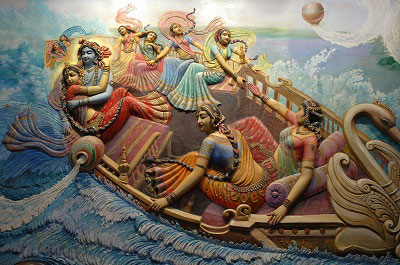 [In the middle of Manasi-ganga, Sri Radha was sitting in Krsna's boat. When the boat began to sink, She tightly clung to His neck. Together They looked very beautiful. May that Govardhana (who provides the setting for this secret lila) fulfill my desire.]

As the boat was bobbing up-and-down, Srimati Radhika, out of fear, caught hold of Krsna – and that is what He wanted.

So we will go to Paranga-ghata, where Krsna performed His nauka-vilasa (boat pastimes), then to Cakalesvara Mahadeva, and then on to Srila Sanatana Gosvami's bhajana-kutira.

[From Vraja-mandala Parikrama book – Cakra Tirtha: This place is situated north of Manasi-ganga. Cakresvara Mahadeva, currently known as Cakalesvara, resides here. When Indra poured torrential rains over Vraja, Mahadeva (who is Sadasiva, and therefore visnu-tattva) served Giriraja and the Vrajabasis by holding his trident up like a cakra and protecting them. (Some devotees declare that it was on Mahadevaji's request that Sudarsana Cakra protected Giriraja Govardhana and Vraja, and that hence Mahadeva's name is Cakresvara Mahadeva.) The ghata on which Cakresvaraji presides is also called Paranga-ghata. The gopis used to cross Manasi-ganga from here. Sri Krsna would play the part of a boatman and perform boating-pastimes (nauka-vilasa) and other lilas while ferrying the gopis across Bhagavati Manasi-ganga.
Sri Sanatana Gosvami's bhajana-kutira: At Cakra Tirtha, opposite Cakalesvara Mahadeva, is Sri Sanatana Gosvami's bhajana-kutira. Sanatana Gosvami sometimes resided here to perform bhajana, but being disturbed by its menacing mosquitoes, he considered moving elsewhere. At that time, Cakalesvara Mahadeva arrived there in the guise of a brahmana and requested him, "Babaji, please do not move elsewhere. Stay here and freely perform your bhajana. From today, the mosquitoes will no longer trouble you." Mosquitoes have not caused a disturbance here since. Sanatana Gosvami remained here for some time, and was able to perform his bhajana untroubled.]

And then we will go to Mukharavinda. There, being your representative, I will perform Govardhana puja with milk, flowers, and other paraphernalia.

It may be that I cannot go with the parikrama party on foot. It may be that I will go by car. I will do some parikrama and speak a little, and then I will return here. For at least one full month, and for one month after that, I will have to take rest – and I think that I will take rest in Hawaii – in Vrndavana, by the side of Yamuna. Kalindi, or Yamuna, is there, and the mountains there are Govardhana. So, I will be staying there.

[Later, at Mukharavinda] Here is Mukharavinda, meaning the lotus face of Sri Govardhana. Govardhana's form is like that of a sitting cow. His hind part is Puchari, or Punchari. He has turned his neck to place his lotus face near his stomach, which is the town of Govardhana. His two eyes are Radha-kunda and Syama-kunda. If we worship Giriraja Govardhana here and give all this maha-prasadam to him, then he will take it in his mouth here. We have therefore done puja and everything here.

[From Vraja-mandala Parikrama book – There is a beautiful temple here with a sila of Giriraja's mukharavinda. He is given abhiseka, puja and offerings of bhoga every day, and festivals are also organized on Annakuta and Dipavali.] 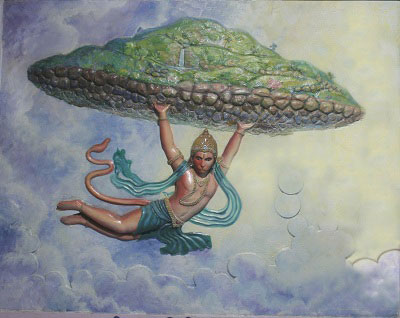 Who is Giriraja Govardhana? Very briefly, I will tell you that he is the son of Dronacala Parvata. In order to make a bridge to Lanka from Ramesvaram, Ramacandra sent Hanuman and all the monkeys to collect rocks from different parts of India, and therefore they were bringing mountains and various stones. Hanuman jumped from there to the Himalayas and saw this mountain, Giriraja, the small son of Dronacala. He took Giriraja on his hand and jumped back toward Ramesvaram. As he was flying over Vraja he heard an aerial voice from Ramacandra: "The bridge is completed now, and there is no need of bringing any more mountains. So, leave the mountains where they are." Thus, Hanuman kept Giriraja here.

But why was Giriraja Maharaja left here? Giriraja knew that in Dvapara-yuga Krsna would come with all His powers – Radhika and the gopis, and all other associates. So he considered, "I must be here."

[From Vraja-mandala Parikrama book [Part Two; Govardhana; The Appearance of Sri Govardhana in Vraja] – According to the Adi-varaha Purana, during the advent of Rama, the monkeys and bears all brought large rocks and stones from many places to construct a bridge across the ocean. On the order of Sri Ramacandraji, Hanumanji was carrying Govardhana to the ocean, having uprooted him from Uttarancala, when he heard a divine sound that announced, "The ocean bridge is now complete, therefore no more rocks are required." Hearing this, Hanumanji became sad and put Sri Girirajaji down here, where he stands today. Girirajaji also became very unhappy and said to Hanumanji, "You have deprived me of the touch of Sri Rama's lotus feet. I will curse you." Hanumanji replied, "Please forgive me. In the next Dvapara-yuga your desire will be fulfilled. At that time, Svayam Bhagavan Sri Krsna will stop the worship of Indra and worship you instead. Angered, Indra will try to destroy Braja with his vajra (thunderbolt) and by sending torrential rains. At this time, Sri Krsna will hold you on His hand to protect Vraja and thus fulfill your desire."
Saying this, Hanumanji leapt into the air and arrived at Sri Ramacandraji's side by the aerial pathways. After narrating the whole incident to Him, Sri Ramacandraji said, "All these rocks, which have been assembled to build the bridge, have been delivered by the touch of My feet. But I shall fulfill the desires of Govardhana by holding him on My hand and touching him with My whole body. At the close of Dvapara-yuga, I shall take birth in the dynasty of the Yadus and make Govardhana famous as the best Haridasa by herding the cows with My sakhas on his slopes and by performing pastimes (keli-krida) with My beloved gopis in his kunjas.]

There are so many stories, which we will explain this afternoon in class, but there is one very secret thing I want to you know now. Krsna and Radha and the gopis' very confidential, sweet pastimes are enacted in the caves and kunjas of Govardhana. There are beautiful kunjas everywhere on Govardhana. You cannot see these kunjas at present, but at that time there were so many kunjas and groves here, and Giriraja is witness to these sweet pastimes.

As you know, even Sankara, being male, could not enter rasa-lila. So, if Giriraja Govardhana is male, then he cannot see all the beautiful, sweet pastimes of Radha-Krsna and the gopis. It is thus proven that Giriraja has come from the heart of Radhika – to serve Radhika. So, in one way, he is like a gopi; Haridasi, not Haridasa. He is Haridasi-varya, the best gopi-servant of Radhika and Krsna. It may be that, being a gopi, he may come in the form of a gopi to serve in the sweet pastimes of Krsna.