Guru "In Full", A Manifestation Of Radhika - revised 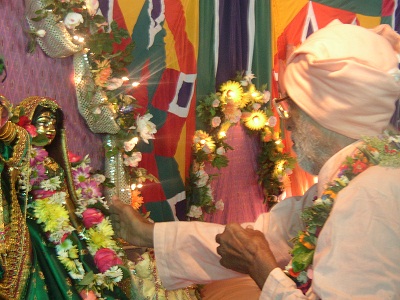 It is stated in verse six of Sri Gurvastakam by Srila Visvanatha Cakravarti Thakura:

["Sri Gurudeva is always present with the sakhis, planning the arrangements for the perfection of yugala-kisora's amorous pastimes (rati-keli) within the kunjas of Vrndavana. Because he is so expert in making these tasteful arrangements for Their pleasure, he is very dear to Sri Radha and Krsna. I offer prayers unto the lotus feet of Sri Gurudeva."]

[Audio only sound file available at this link.]

What is the meaning of nikunja-yuno rati-keli-siddhyai? What is that guru doing?

Srila Gurudeva: What services is he rendering? Very secret.

Srila Gurudeva: He not only does this. Sometimes he rebukes Krsna in many ways, and sometimes he also cheats Him. [An example of cheating Krsna is as follows: Krsna may ask that guru (in his form as a maidservant of Srimati Radhika) if Radhika has come to the Vrndavana forest to meet Him. That maidservant may reply, "No, Her mother-in-law would not allow Her to leave the house." Although Srimati Radhika is actually hiding in a nearby grove, Krsna believes the maidservant. His anxiety to meet Radhika thus increases, and when they meet shortly after this, that meeting is more meaningful. -ed]

Gurudeva must be like this: nikunja-yuno rati-keli-siddhyai. He must be serving the Divine Couple Radha and Krsna, and especially Radhika. The gopis make so many arrangements for Their meeting. Rati-keli-siddhyai yā yālibhir yuktir apekṣaṇīyā. They engage in all the methods of cheating their fathers and mothers, their husbands – everyone – for the purpose of the successful meeting of Radha and Krsna, and for the purpose of serving Them. Gurudeva is very expert in all these activities.

We see in our guru-gayatri, krishnānandāya dīhmahe. This refers to both Krsna and Krsnaa [with a long 'a' at the end]. Pleasing both. Anyone can serve Krsna, any male can serve. But who will serve Krsnaa?

Who is Krsnaa? Krsnaa is Radhika. Any male cannot serve [Her]. Never and never. In what form can he do rati-keli-siddhyai [serve the playful, loving pastimes of Radha-Krsna]? A guru cannot serve in his male form. So Svamiji, my Gurudeva, you know, my Gurudeva – Vinoda Manjari, Srila Prabhupada – Nayana Manjari, Srila Bhaktivinoda Thakura – Kamala Manjari, [Srila Jiva Gosvami] – Vilasa Manjari, [Srila Rupa Gosvami] – Rupa Manjari and Rati Manjari [Srila Raghunatha dasa Gosvami]. They can serve.

Dhrstadyumna dasa: And our Srila Prabhupada?

Srila Gurudeva: You can tell [laughter]. If you surrender everything, fully, then I may tell you. Otherwise, I will not. I know who he is, but you do not know [laughter]. None of the ISKCON leaders know. He has cheated them all.

So Gurudeva is rati-keli-siddhyai yā yālibhir yuktir apekṣaṇīyā. I offer pranama to my Gurudeva in that very form, who is cheating others, even cheating Krsna. By such 'cheating,' he brings Krsna to serve His most beloved Radhika. In Sri Caitanya-caritamrta it has been openly told who the guru of Krsna is. Who?

Srila Gurudeva: Yes, so why we should not take shelter in the lotus feet of the guru of Krishna? Our guru is there.

This verse [nikunja-yuno rati-keli-siddhyai ] does not apply to ordinary, bogus gurus who can  fall down twenty times or thirty times a day. It also doesn't apply to gurus who can fall down. I do not accept them as gurus. Actually, guru is one who can serve Radhika. If a guru has fully controlled his senses but is not directly serving Radhika, he is only partially guru.

Still, even if he is not like Rupa Manjari and Rati Manjari, and if he is not serving them, he may be a guru in part, but not in full. The highest quality of the guru is service to Radhika. In this way, Srila Visvanatha Cakravarti Thakura is writing vande guroh sri caranaravindam. I bow down to my Gurudeva, and all gurus who serve in this way. So our guru is not only the prakasa (manifestation) of Nityananda Prabhu or Baladeva Prabhu, but he is also the prakasa of Radhika. Such a guru is the highest. Even Baladeva Prabhu takes shelter of Srimati Radhika's lotus feet. You know how? As Ananga Manjari.  How beautiful and glorious She is.

Asrama Maharaja: Gurudeva, you said that a partial guru has controlled the six urges like vaco-vegam, manasa, krodha-vegam, etc. Such gurus, even with that partial quality, will not fall?

Srila Gurudeva: They will not fall down, but they are not perfect gurus. Those who are serving Srimati Radhika personally are the highest type of guru.

Asrama Maharaja: Regarding the ones who have fallen down, they're not even partial gurus?

Srila Gurudeva: No, never, never.  They are not even devotees, what to speak of being gurus.

Devotee: Because they are cheating?

Srila Gurudeva: They are cheating themselves, not only cheating others.