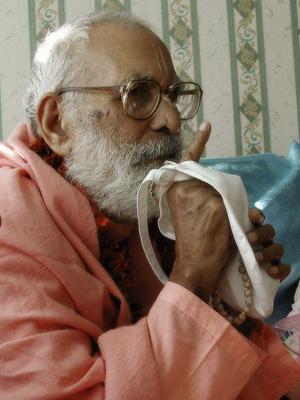 [Yugala Kisora dasa:] Gurudeva, I have a very simple question. One of the devotees just said in your class that one attains a quality of sraddha according to his degree of sukrti (spiritual pious activities accumulated over millions of lives), and yet I heard that Prabhupada said that he is creating the sukrti of his disciples. So I see a little bit of a paradox there. If a person only attains the association of a great sadhu like Srila Prabhupada due to sukrti, why did he say, "I am creating their sukrti"?

[Srila Narayana Maharaja:] You have not understood. All things cannot be explained in a word or two. What was said in class?

[Brajanatha dasa:] According to our sukrti, past impressions...

[Brajanatha dasa:] That is what Yugala Kisora prabhu is telling now. He doesn't know how to reconcile the two ideas.

[Srila Narayana Maharaja:] It is true that a person gets association with sadhus as a result of past impressions, and it is also true that his present sukrti is also created by hearing from pure devotees. Some more inspiration will come by this, and he will advance. Okay?

[Srila Narayana Maharaja:] By good association he is getting new sukrti, and this is added to the past impressions explained in the sloka:

Sancitai sukrti means vast accumulation of sukrti (spiritual pious activities [such as visiting temples and holy dhamas, observing holy days, serving devotees, hearing sastra, honoring prasadam, etc.] performed without knowledge or without realization). This includes past sukrti as well as present sukrti. When that collected sukrti becomes sufficiently strong, the aspiring devotee will be able to take more and more advantage of sadhu-sanga.

[Devotee:] In order to answer Yugala Kisora prabhu's question and reconcile the two understandings, can we say this?: Those of us who met Prabhupada, as well as those of us who met Prabhupada in the form of his books and his movement, were able to do so by dint of millions of past births' sukrti. Then, by associating with him and serving him, he gave us more sukrti so that we could meet you.

[Srila Narayana Maharaja:] It is all right. This is because I never cheat. I'm trying to give you whatever pure bhakti I have in my heart. I don't have any desire for self gain at all.

[Dina Bandhu dasa:] Gurudeva, you were mentioning that only the suddha-bhakta can give all tattvas (established philosophical truths), along with many pastimes and sastric evidences. You said that only he can give these things. But we see that many devotees become very learned and they can also speak about many tattvas and draw from many sastric evidences. Are they really GIVING that tattva just because they can remember it? Or is it only deep within the heart of the suddha-bhakta.

[Brajanatha dasa:] Dina Bandhu prabhu is saying that a devotee may have learned so many things...

[Srila Narayana Maharaja:] Learning alone will not suffice. I never went to college, and I've read neither ka, kha, ga, anusvara, nor visarga (the ABC's of Sanskrit grammar). I know so many Sanskrit scholars in Mathura and other places in India, who can recite the four Vedas in various melodies such as harsva, virga, and pluta. They are very learned, but they have no bhakti at all. Many of them are totally mayavada, and even those who are not mayavada give less preference to bhakti than to worldly responsibilities and money-making. In fact, they themselves are always engaged in politics and making money, and they are absorbed in their material positions. I know so many renowned and learned persons of this caliber.

Come to the University of Srila Haridasa Thakura. Try to come to, and believe in, the school of Srila Gaura Kisora dasa Babaji Maharaja, who became totally blind in the last stage of his life due to his severe renunciation. Gaura Kisora dasa Babaji Maharaja was also illiterate, and he could not even write his own name in Bengali. Still, he was accepted as the Guru of the most learned person in the entire universe at that time: Srila Bhaktisiddhanta Sarasvati Thakura. We should try to be like them.