Questions From Onions To Rati 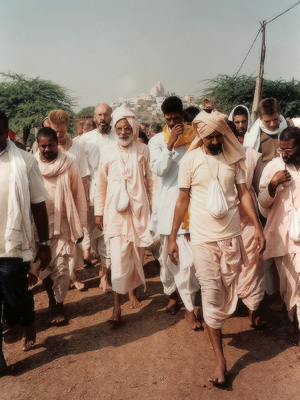 [At the end of Srila Narayana Maharaja's class of Feb 25th in Australia, devotees asked the following:]

[Srila Narayana Maharaja:] It is quite true; so we should not eat those things. What Vyasadeva has written is true. [*See endnotes (1)] Vyasadeva knows everything past, present, and future. He was able to see what qualities are present in each entity. For example, Bhagavad-gita describes the sattvika, tamasika, rajasika, and nirguna natures of various persons, plants, foodstuffs, activities, knowledge, and so on.

Vyasadeva was able to see what is favorable for bhakti and what is unfavorable. He saw that the onion is tamasika (in the mode of ignorance). It has all the qualities present in the meat of cows, and the same result obtained from eating cow-flesh occurs from eating onion. One will become lusty and violent by eating it. Vyasadeva has also seen in his meditation that garlic came from the bones of that cow. It is full with bad qualities and puts one in the mode of ignorance. Don't eat it.

We should try to follow Vyasadeva's instrucions. If you do not follow, the same bad qualities will come to you that comes by eating cows' flesh, bones, and so on. This has been explained in sastra, and it is confirmed by scientific evidence.

My request is that you should know your goal, even if you are not qualified to achieve it. Be sincere like the cataka bird (skylark). That bird is willing to die without water rather than drink a drop of water from any tank, pond, river, or ocean, or even from the Ganges or Yamuna. She is always looking towards the sky. She will not drink water for the whole year if she has to wait that long, but she will only drink rain, and only during the one or two week period of the svati constellation. A rare and fortunate sadhaka will be like that, thinking, "I only want to serve Rupa Manjari. I only want to be a dasi of Rupa Manjari."

"This fallen soul stands with a straw in his teeth, ceaselessly begging to attain the dust of the lotus feet of Srimad Rupa Gosvami birth after birth." (Sri Dana Keli Cintamani 175, Raghunatha dasa Gosvami)

[Srila Narayana Maharaja:] Srimad-rupa-padambhoja-dhulih syam janma janmani. I want to be a dust of the lotus feet of Srila Rupa Gosvami birth after birth.

[Devotee:] You said in class that there are five kinds of ratis: santa, dasya, sakhya, vatsalya, and madhurya. Sometimes you've defined rati as prema, like when Raghunatha dasa Gosvami prayed, "Oh mind, please have this unprecedented rati for guru."

[Srila Narayana Maharaja:] There are so many kinds of rati. When, on the platform of the sthayi-rati of dasya, sakhya, vatsalya, etc., vibhava, anubhava, sattvika, and vyabhicari meet in the proper proportion, then it becomes bhakti-rasa, and then it is prema. [*see Endnotes (2) for definitions]

[Devotee:] And sometimes you define rati as bhava-bhakti.

[Srila Narayana Maharaja:] It is sometimes defined in that way. Here I am explaining that first rati appears. Then, on the platform of rati, when vibhava (uddipana and alambana), anubhava and so on meet, then it will be rasa, and then bhakti-rasa (prema-rasa) manifests.

[Devotee:] So what is the definition of rati itself? How can it can mean both bhava-bhakti and prema-bhakti?

[Srila Narayana Maharaja:] Rati is that sthayi-bhava (permanent sentiment of a particular permanent relationship with Krsna). When rati does not appear in a special way, there it is only love.

"Pure devotional service in Krsna consciousness cannot be had even by pious activity in hundreds and thousands of lives. It can be attained only by paying one price - that is, intense greed to obtain it. If it is available somewhere, one must purchase it without delay." (Cc. Madhya 8.70)

This sloka applies to a general meaning of prema. There is no specific rati there. And when, by the association of a bhakta-bhagavat and according to your constitutional rati which is now in latent position, both mix, rati will gradually develop, and a sentiment will peep from inside, saying, "I like this particular relationship with Krsna." Guru will see this and reveal to you your specific rati. Thus you continue to advance and your siddha-deha (pure spiritual body) will manifest. And, on the platform of siddha-deha, vibhava, anubhava, sattvik, and vyabicari will all manifest - and then it will be bhakti-rasa. You should gradually know all these principles.

"Do not talk like people in general or hear what they say. You should not eat very palatable food, nor should you dress very nicely." (Cc. Antya 6.236)

Don't sleep. Don't simply endeavor to maintain your life. Don't waste your time going in that direction. Be satisfied by what comes easily, and always engage in the practice of bhakti-yoga.

[* Endnotes (1) - The following was spoken by Srila Maharaha's servant, Sripad Madhava Maharaja:]
American scientists have discovered in their laboratories that there are 21 different types of slow poisons in both, so they are not innocent foods. In Satya-yuga, the rsis performed gomedha (cow) and asvamedha (horse) sacrifices for the welfare of the whole universe. [This proved the efficacy of the recitation of the Vedic mantras uttered during the sacrifice.] A very old cow or a horse would be sacrificed by being cut into pieces and placed in the fire. Afterwards, the rsis would utter mantras and the same animal would come alive in a beautiful young body.

The wife of a rsi who was about to perform a gomedha sacrifice was once pregnant. She had a very strong desire to eat, and she had heard that if, during pregnancy, one has a desire to eat and does not fulfill it, the newly born child will always have saliva coming from its mouth. This will be troublesome, both for the mother and the child. The rsi's wife had a strong desire to eat meat, and thus she stealthily took one piece of meat from the body of the cow that was offered in sacrifice. She hid it and was planing to eat it very soon. At that time, the rsi was finishing the sacrifice and uttered all the mantras for the cow to come to life. However, when he then saw the new cow, he noticed that there was a small part missing from her left side. He was surprised because this had never happened to him before. He went into meditation and realized that his wife had taken away a piece of meat during the sacrifice.

Due to the effect of the mantras uttered by the rsi, there was now life in this small piece of meat. The wife now also understood what happened, and she quickly threw the meat far away. Shortly afterwards, red lentils sprouted from the blood of this meat, garlic sprouted from the bones (both garlic and the bones of a cow are white), and onions and carrots sprouted from the flesh. Thus, these foods are never eaten by any Vaisnava, because they are in the mode of ignorance.

(Any devotee may rightly ask at this time, "Why would Prabhupada have allowed carrots to be eaten, if they are so bad? The answer was kindly given by Prabhupada himself, in Boston, in 1969. He said, "If I told you all the rules and regulations now, you would faint. So for now, follow all the rules I've given, and make up the balance by chanting Hare Krsna." He also often said that he is following the guidelines given by his Guru Maharaja; that is, to induce the Westerners to first chant Hare Krsna, and as they become more and more established in that, the rules and regulations would gradually come.)

Sattvika-bhava - one of the five essential ingredients of rasa. It is the eight symptoms of spiritual ecstasy arising exclusively from visuddha-sattva, or in other words, when the heart is overwhelmed by emotions in connection with the five primary moods of affection for Krsna. The eight symptoms that constitute sattvika-bhava are: (1) stambha (becoming stunned), (2) sveda (perspiration), (3) romanca (standing of the hairs on end), (4) svara-bhanga (faltering of the voice), (5) kampa (trembling), vaivarna (pallor or change of color), (7) asru (tears), and (8) pralaya (loss of consciousness or fainting).

Vibhava is also one of the five essential ingredients of rasa, and the cause for tasting bhakti-rasa. These are of two types: (1) alambana, the support; and (2) uddipana, the stimulus. Alambana is further divided into two categories, namely the visaya (Krsna) and the asraya (Krsna's devotee).

Anubhava is also one of the five essential ingredients of rasa. The actions that display or reveal the spiritual emotions situated within the heart are called anubhavas. The anubhavas are thirteen in number: 1) nritya (dancing), 2) vilunthita (rolling on the ground), 3) gita (singing), 4) krosana (loud crying), 5) tanu-motana (writhing of the body), 6) hunkara (roaring), 7) jrimbhana (yawning), 8) svasa-bhua (breathing heavily), 9) loka-anapeksita (giving up concern for public image), 10) lalasrava (salivating), 11) atta-hasa (loud laughter), 12) ghurna (staggering about), and 13) hikka (a fit of hiccups).

Vyabhicari-bhava is also one of the five essential ingredients of rasa. It is composed of thirty-three internal spiritual emotions that emerge from the nectarean ocean of sthayibhava, cause it to swell, and then merge back into that ocean. These include emotions like despondency, jubilation, fear, anxiety, and concealment of emotions.]