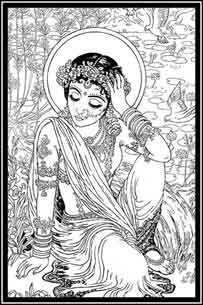 [This discourse was translated from Hindi into English by Jagannatha dasa Adhikari.]

Radharani is speaking to a bumblebee, who is buzzing about and trying to sit on Her lotus feet, thinking them to be a lotus flower. She tells the bumblebee to go back to Madhupuri (Mathura), from where it has come, for it looks very intoxicated and impure. But the bee does not leave, and Radharani responds by saying, "You are a bumblebee with six legs. Man has two legs and animals have four legs. Animals are foolish; they do not learn anything from their past mistakes and they are not concerned about their future. You have six legs, and therefore you are worse than the animals." In this way, referring to the bee as a cunning cheater, worse than an animal, and so on, She calls him ill names.

Tears fall from Her eyes as She says in an angry mood, "Just as you drink nectar from the flowers, Krsna came to us and we gave Him all our love. Then, after drinking the nectar of our lips, He left us forever. After drinking nectar from one flower, you leave it and go to sit on another flower, without realizing whether that next flower is good or bad. You become so madly intoxicated by drinking the nectar from the first flower, that you loose all your intelligence. Krsna is also like that. He was previously here with us, and now he is in Mathura and sitting on flowers like Kubja. As you drink nectar from all types of flowers without looking to see whether they are good or bad, Krsna associates with the girls in Mathura – without discrimination.

The bumblebee buzzes and Radharani continues, "What are you saying? Are you saying that Laxmi, the most chaste lady, always hankers to serve the lotus feet of Krsna, whereas we are chasing Him away? Are you saying that we are nothing compared to Laksmiji, and that we should not be angry with Him? If you are saying this, then please be quiet."

Radharani continues, "Laksmiji is new in her duties of serving Krsna, but we are very experienced in our duties. We have known Him since our childhood and we know all His secrets. There is nothing that we do not know about Him. He is very clever and a sweet talker, so He can convince Laxmiji – but not us. We know all His tricks. Time and again he has cheated us, but now we are experienced and we will no longer be cheated by Him. We will not compromise with Him.

"Do not try to influence us with your sweet buzzing. He also speaks sweet words, and in fact you have learned this from Him. But do you know who taught Him all sweet things? He learned everything from us. In fact, we gopis even taught Him how to do maan, how to be in a sulky mood. So don’t try to convince us.

The bumblebee replies, "He is very attached to you. He can never leave you. He will not repeat His mistakes."

Radharani then says, "O cheater, don’t try to teach us. We know Him very well. Let us tell you one thing. All those who are black, inside and outside, like you are – we do not trust them. I do not want to make any kind of agreement with them. I have learned my lessons, and I will never again trust any black person. There is no need for any kind of agreement. Do you know what is our situation today? We have left everything – our house, our family, our chastity – everything for Him. And then He left us and went away. We do not have a single grain of food that we can offer to you, and we are in this situation because of Him. How do you expect us to reconcile this?

"We have heard from Paurnamasi that there was one very attractive black person in Treta Yuga, and He was also black inside. He said that to uphold His father’s order, He had to go to the forest for 14 years; so he dressed like a renounced sadhu and went to the forest with His wife. Why did He have to take His wife with Him? If He wanted to go as a sadhu, he should have gone alone. And there in the forest someone stole His wife. He wept, and then He met a monkey named Sugriva who was also in the same situation. Sugriva's wife had been stolen by his brother Bali, and so these two became friends and decided to help each other find their wives. That black person, Rama, told Sugriva to fight with his brother and that He would help him. Then, when He was fighting, He hid behind a tree and struck Bali with His arrow." Bali had a benediction that if anyone faced him, he would take half of that person's strength.

"Why did He have to kill a monkey?" Monkeys are human-like.” The Sanskrit and Hindi word for monkey is ba-nara, and nara means human. "No one eats the meat of a monkey. So why did He kill him without any reason?"

Radhika continues, "He thinks He can control His senses; but see how, just to get back His wife, He helped Sugriva to kill a monkey. Is this fair? What didn't He stoop to do? He dressed very attractively and went to the forest, and because He looked so attractive, Ravana’s sister Surpanakha became attracted to Him. She told Him that she wanted to marry Him. She simply desired Him as her husband. So why did He have to cut off her nose and ears? He should have told her that He was married and that she should look for someone else. Now, by having her nose and ears cut off, no one else would marry her. What was the need for cutting off her nose and ears? There was no justification for His actions. These are the actions of a black person like Him."

Bali Maharaja’s grand father Prahlada Maharaja came there with Brahma and told Him, "When one takes Your shelter, You release him from all his material bondage. But You took all of Bali Maharaja’s possessions and bound him up." They pleaded to Him to release Bali Maharaja. He was pleased and told Bali Maharaja to ask for a benediction. Bali Maharaja replied, "There are forty nine doors in my palace. I do not know when I will use which door, but whenever I would use any door in my palace, I would always want to see You at the door." And Vamanadeva gave that benediction to Bali.

Radhika continues, "We know that black person very well, so it is not possible to make any compromise or agreement with Him. We do not trust Him."

The bumblebee buzzes and Radhika says, "Oh, you say, 'Why do you keep talking about Him if You do not want anything to do with Him? Isn’t there anything else to talk about in this whole world apart from Him?' You are saying, 'If You want to leave Him, then leave Him completely. Don't talk about Him.' Yes, we can leave Him, but we can never stop ourselves from discussing His pastimes.

"I am telling the truth and speaking through experience. This black person's sweet talk, His sweet pastimes, and His flute playing is so wonderful that if one sees Him or hears His words or flute playing only once, she becomes mad. She becomes disinterested in his husband, family and home."

Such a person gives up all types of attachment, and makes his mother, father, daughter, wife and all others cry, "Oh, my son has left home!" Then he goes to Vrndavana and roams there. Like a bird, he does not have anywhere to stay. He has nothing to eat. If he gets something by madhukari (begging), then he will eat; otherwise he will not. Like birds, you will also not have any place to stay, and you will start calling, "Alas Krsna! Alas Radha!" And you will also start roaming in Vrndavana.

The gopis say, "If you want to stay peacefully in your home, never hear the name of that "Black One," and never hear His pastimes." You should not hear the wonderful pastimes of Krsna. If you do, you too will become mad and quit your homes.