The "Marriage" Of Radha And Krsna 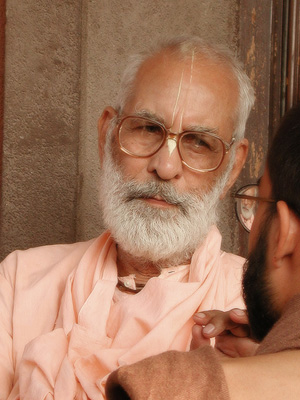 [This lecture from Kartika time was given during the Vraja Mandala Parikrama in Varsana. There, Srila Bhaktivedanta Narayana Maharaja responded to a common misconception among many Vrajavasis, that Radha and Krsna were actually married in a ceremony officiated by Lord Brahma. This misconception was presented by the panda (brahmana scholar and historian) who accompanied the parikrama party to the various pastime places in Varsana. The panda also referred to Srimati Radharani as Matesvari, which is a title meaning the Supreme Mother or Goddess. Srila Maharaja objected to this title, which is accurate from a philosophical point of view, but inconsistent with the mood of serving Sri Sri Radha and Krsna in Their Vrndavana pastimes. ? ed.]

All glories to Sri Guru and Gauranga! Now we are in Varsana-dhama. I have told you about the gloriesof Varsana, and now I want to speak about radha-tattva. Srimati Radharani is the beloved of Krsna, but She is not an ordinary female with lusty desires as seen in relationships between a mundane boyfriend and girlfriend. She is the antaranga-sakti (internal potency) of Sri Krsna. We want to discuss what Raya Ramananda explained about radha-tattva, krsna-tattva, rasa-tattva, prema-tattva, and vilasa-tattva, and also what Sri Caitanya Caritamrta Adi-lila chapter four stated regarding these important topics. Moreover, Srila Rupa Gosvami and Srila Raghunatha dasa Gosvami have explained more about radha-tattva than you will find anywhere else, and you should try to learn all of their explanations thoroughly.

We have many learned scholars here,and I am requesting that they each speak for not more than fifteen minutes to offer their puspanjali (offering of the flowers of one's heartfelt words of praise). I want everyone to have an opportunity to speak. We are here for only three more days. Tomorrow weare going to Kamyavana, and we may not return until after 5:00 pm, so there may be no class tomorrow evening. The following day we will go to Uccha-gaon, and on the third day we will go to various places around Nandagaon. It will not be until after we return from Nandagaon and Uccha-gaon that we will have time for classes, so I want to discuss radha-tattva, bhakti tattva, prema bhakti andso on here.

Tomorrow you will be going to Kamyavana, Charan Pahari, Vimala Kunda, Bhojansthali, Setabandu, Vrnda-devi, Radha-Govinda, Gopinatha, Madana Mohana, Panca-pandava, Draupadi Kunda, and many other places. Tirtha Maharaja, who knows all the pastimes of these places, and also our panda, will be there. If you go, the blessings of this dhama will come to you automatically. If you hear the narrations and explanations of the sweet pastimes of Radha-Krsna while on parikrama, you will be infused with all transcendental energy ? so you should try to go. I am also requesting that you give daksina (a donation) to our panda, and he will be satisfied with whatever you give.

Some persons have false pride and false ego because they have taken birth in Vrndavana and think themselves to be Vrajavasis. However, if theydo not have the internal moods of Nanda Baba, Yasoda-maiya, and all of the eternal associates of Krsna, they are not Vrajavasis. Real Vrajavasis are those who have the mood of Vrajavasis like Nanda Baba, Yasoda-maiya, Krsna's sakhas, (boyhood friends) and especially the mood of the dasis (maidservants) of Sri Radha.

I don't like to hear Srimati Radhika referred to as Matesvari Radha (Supreme Mother).

This is very wrong. Most everyone in transcendental Vraja thinks of Vrsabhanu Maharaja as their brother and Lali (term of affection forRadha, meaning daughter) is their beloved daughter. Others think of Radhika in friendship, and Krsna thinks of Her as His beloved. How can she ever become Matesvari, or mother? This conception is very wrong. I ask our panda to kindly excuse me. She may be Matesvari in one sense, but in Vraja there is no place for the word Matesvari; there is no such thing. There is no mood of opulence here in Varsana; the atmosphere is always very natural and sweet.

So-called Vrajavasis will tell you that Radha was married to Krsna, but this is wrong. In the Brahma-vaivarta Purana it is written that Brahmaji came to Vrndavana and performed the marriage ceremony of Radha and Krsna, wherein Lalita and Visakha sang some marriage songs. But how does a real marriage take place? The mere presence of a purohit (priest) is not enough. Someone must formally give away the girl in charity, and this ceremonial ritual is called kanya-dana.

Do we see the presence of VrsabhanuMaharaja and Krtida in Bhandiravana (the place where the "marriage" took place)? Also, Nanda Baba and Baladeva would have joined in the marriage procession along with the bridegroom. Was either of them present there? Were any Vrajavasis other than the young gopis in attendance? If not, how did this marriage ceremony take place? We may say that an exchange of garlands took place, and that is okay; this is known as a Gandharva marriage. But ifa real marriage had taken place, the bride would have gone to her husband's house.

It is true that marriage arrangements were taking place. Plans were being madefor the marriage of Radha and Krsna, but Yogamaya Purnamasi-devi came and put ahalt to that marriage. She told the parents, "This marriage cannot take place. "Their astrological charts are not compatible; their naksatra (constellations) arenot well matched. One important sign is missing, and that makes it inauspicious for their marriage. No, no. This marriage must not take place. Abhimanyu, the son of Jatila, is from the richest family in Vraja. He is fully qualified, very capable and endowed with all good qualities. He should marry Her."

In what way did this marriage of Radhika and Abhimanyu take place? It took place between chaya (shadow images) ? Krsna's shadow, Abhimanyu, married Radha's shadow.

Suppose, for the sake of argument, we saythat Radhika was somehow married to Krsna. But then what about the other gopis? It is stated in Srimad-Bhagavatam:

["Dear Acyuta, You know very well why we have come here. Who but a cheater like You would abandon young women who come to see Him in the middle of the night, enchanted by the loud song of His flute? Just to see You, we have completely rejected our husbands, children, ancestors, brothers and other relatives." (SB 10.31.17)]

["I am not able to repay My debt for yourspotless service, even within a lifetime of Brahma. Your connection with Me is beyond reproach. You have worshiped Me, cutting off all domestic ties, which are difficult to break. Therefore please let your own glorious deeds be your compensation." (SB 10:32:22)]

For the sake of rasa, they had a natural inclination towards Krsna as their beloved, rather than as their husband. Rukmini does not have this same feeling; after her marriage to Krsna, Rukmini developed a mood of reverence. In comparison, how do the gopis behave? They are Krsna's hladini-sakti while in this world, as well as in the spiritual world and inall the worlds in which they may appear. Their relationship is unchanging. Krsna bows his head at Radhika's feet. He offers His flute, His stick, and all that He possesses unto Her feet. When Srimati Radhika puts the dust from Her feet on Krsna's head, the mahavar (red foot paint) leaves a mark on His forehead. What is written there in that mark? "Radha." And who wrote this on Her foot? Krsna. Krsna has the name "Radha" stamped on His forehead, and this pleases Him immensely.

Rukmini and Satyabhama cannot do this, because after marriage one develops a feeling of reverence for the husband as one's master or lord. If Radhika had been married to Krsna, she would have developed this mood and behaved accordingly. Some people do not understand this point and therefore have an incorrect conception. Even our learned panda, an intelligent person, supports the idea that a marriage took place between Radha and Krsna. Such persons have no knowledge or realization of rasa-tattva, and that is why they speak like this.

I have opposed such ideas, and I have written a book about this. Give this book to them; let them read it. They have not read the works of Srila Rupa Gosvami, Srila Sanatana Gosvami, Srila Raghunatha dasa Gosvami, Srila Jiva Gosvami, nor have they read Sri Caitanya Caritamrta. If one does not have the association of Sri Caitanya Mahaprabhu's associates, one will have misconceptions such as the idea that Srimati Radhika is Matesvari.

I am a servant of Radhaji's lotus feet:

["I worship lotus-eyed Radha. I meditate on sweetly smiling Radha. I glorify supremely merciful Radha. She is the only goal of my life. I have no other goal." (Sri Sri Radhikastottara-sata-nama-stotra, text 131, by Raghunatha dasa Gosvami)]

["If your desire to serve Srimati Radharani does not come about, then your so-called worship of Krsna is completely useless.Just as I never know the sun to be without sunlight, so I do not care to regard Madhava without Radha." (Sri Radhastakam Song 8 - Srila Bhaktivinoda Thakura)]

["O You who are as fair as gold, will I happily and gently massage Your lotus feet as You rest Your head against the arm of the prince of Vraja, as Sri Rupa Manjari massages your hands? (Sri Vilapa Kusmanjali Text 72, by Srila Raghunatha dasa Gosvami)]

Radhe Radhe Radhe Jaya Jaya Jaya Sri Radhe! There is nothing else. When Krsna hears the chanting of Sri Radha's name, He goes immediately, as if automatically,to that place. When Krsna comesto Radhaji's kunja, Her dasis like Rupa Manjari, and also Her friends, may say, "Jahi Madhava, Jahi Madhava, Jahi Kesava!" ma bada kaitavabaadam" Go away Madhava, go away. Go away Kesava!" When Krsna comes, if Srimati Radharani is in maan She will not let that black person come into Her kunja. Her dasis like Rupa Manjari will scold Krsna by saying, "Go away immediately!" And then Krsna will beg them, "Please arrange for me to meet with Radhaji. O, let me meet My Svamini." This is the glory of Srimati Radhika.

You are so fortunate to come to Vrndavanawith our parikrama party, in the association of rasika Vaisnavas. You are so fortunate. You will have to be ready tomorrow morning by 6:30 AM. If you are late, the buses will be gone and you will not be able to travel.