Even Krsna Accepted A Guru 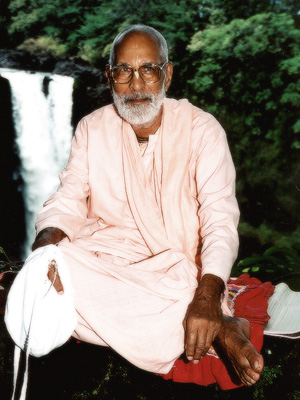 Everywhere in Vedanta, in the Upanisads, and especially in Srimad Bhagavatam, sad-guru has been glorified. The holy name is transcendental; this is true. It is written in sastra, and we hear from so many persons, that we should chant harinama. But someone may say, "I have read here and there that we should chant harinama; so I am chanting. What, then, is the need of a guru, who is like an agent, a broker, or a mediator? Ajamila easily went to Vaikuntha without knowing in the beginning of the glories of harinama. We can chant harinama without accepting a guru."

If one is chanting without being under the guidance of a guru, what will be the result? Such a person can only chant aparadha, except in a rare case, such as in the case of Ajamila. It is stated in Sri Caitanya-caritamrta:

["According to their karma, all living entities are wandering throughout the entire universe. Some of them are being elevated to the upper planetary systems, and some are going down into the lower planetary systems. Out of many millions of wandering living entities, one who is very fortunate gets an opportunity to associate with a bona fide spiritual master by the grace of Krsna. By the mercy of both Krsna and the spiritual master, such a person receives the seed of the creeper of devotional service."(Caitanya-caritamrta, Madhya 19.151)]

Bhakti develops from the seed of bhakti given by guru-rupi-krsna, Krsna in the form of guru. Krsna does not directly give that seed to anyone. He either gives it through sri guru, or He Himself becomes guru and then gives it.

Without accepting guru, the name one chants is not transcendental. That name will fulfill your worldly desires, even up to mukti (liberation), but not more than this. In the case of Ajamila, at first he had no guru. He named his son Narayana at the nama-samskara, the ritualistic ceremony in which babies are given their name. By chance, because he lived in the Vedic culture, he named his son Narayana, and by his recitation of that name he began his chanting of nama-abhasa. That was his first nama-abhasa, and after that he would daily call out, "O Narayana, come on, come on!" By continually doing this, his nama-abhasa continued.

Later, when Ajamila was dying, he saw the ferocious forms of the Yamadutas. Being very fearful, the name of his son automatically came to his throat and he called out, "Narayana!" At that time, at the moment of death, Bhagavan sent His four messengers, the Visnudutas, and Ajamila heard their dialogue as they drove out the Yamadutas. He heard the holy name and glorification of the name of Narayana from the Visnudutas, and thus he received the seed of suddha-nama (the pure name) from them. By this he received the seed of bhakti, his life returned, and he thought, "The holy name that I heard from the four Visnudutas is so powerful! And the glory of that name is so wonderful! Now that I have received this mantra, I must give up this wife, that wife, all my children, and all my possessions." He left everything and went to Haridwar, where he bathed in the Ganges, sat down on its bank, began chanting, and eventually began to chant suddha-nama.

After some time the Visnudutas again came to Ajamila, and this time they said, "Come with us and sit in this chariot-airplane." By now Ajamila had reached the stages of bhava, and then prema. By continuously chanting, "Om namo Narayanaya," he attained Vaikuntha-rati. His rati (prema) was not Vrndavana-rati, not madhurya-mayi prema, but rather it was aisvarya-mayi prema (love of God in awe and reverence, with knowledge of His opulence).

Ajamila told the Visnudutas, "When you drove away the Yamadutas, I wanted to speak with you and touch your feet, but you disappeared. Now you have appeared again and you are telling me to go with you. How did this come to be?"

By the time the Visnudutas appeared to Ajamila for the second time, he had become totally free from all material desires. In the case of Dhruva Maharaja, however, although he was a disciple of Narada, he still had some attachment to his mother. It was for this reason that he could not go to the Vaikuntha that is situated beyond the mahat-tattva. Rather, he went to Druvaloka, a spiritual planet situated near Rama-priya Vaikuntha within this universe.

Valmiki Rsi was also a disciple of Narada, and prior to meeting Narada he had been a dacoit. He had killed millions of brahmanas and tapasvis (ascetics) and stolen their wealth. When Narada Rsi met him, he preached to him hari-katha and at last he said, "You should sit here. I am giving you the seed of the pure name. You should chant 'Rama'." Valmiki was not qualified to chant the name of Rama and, understanding this, Narada told him, "If you cannot chant the name of Rama, then chant, "Ma-ra, ma-ra, ma-ra (death, death, death)." Valmiki replied, "Oh, I can do that," and he began chanting "Mara, mara". Since he was disciple of Narada, he was able to get a concession.

What became of Valmiki? He wrote Rama-lila. He saw that lila in his samadhi (trance) and thus, as Srimad Bhagavatam was written by Sri Vyasadeva in samadhi-bhasya, trance language, in the same way Ramayana was written by Valmiki. Valmiki saw everything about Rama-lila in his trance even before Rama had actually exhibited His pastimes, and then he wrote down those pastimes.

We should understand that without guru we are bound to have material attachment and we are bound to commit nama-aparadha. If the seed of sambandha-jnana (ones relationship with Krsna) and bhakti are not given by a pure guru, there can be no sabda-brahma (experience of transcendental sound, sound coming from the transcendental realm). Acceptance and surrender to a sad-guru is therefore essential.

Although Krsna is the Supreme Personality of Godhead, He also accepted a guru. Once the gopis teased Him by saying, "You have no guru?"

Krsna replied, "Who has said this? My Gurudeva is Bhaguri Rsi."

It is generally accepted that Krsna's guru was Sandipani Muni, but actually Sandipani Muni was like a siksa-guru - His guru of the 64 arts. He was like a schoolteacher. Krsna received Radha-mantra from Bhaguri Rsi, and therefore it is Bhaguri Rsi who is really the guru of Krsna. In this world, when Krsna or any His avataras descend, they accept guru. Mahaprabhu also accepted guru. He accepted harinama and gopal-mantra from Sri Isvara Puripada, and He Himself said to Prakasananda Sarasvati:

["My dear sir, kindly hear the reason why I always chant Hare Krsna. My spiritual master considered Me a fool, and therefore he chastised Me." (Caitanya-caritamrta Adi 7.71)]

["'You are a fool,' he said. 'You are not qualified to study Vedanta philosophy, and therefore You must always chant the holy name of Krsna, which is the essence of all mantras, or Vedic hymns. "(Caitanya-caritamrta Adi 7.72)]

Caitanya Mahaprabhu quoted his spiritual master as saying, "You have no qualification to enter Vedanta philosophy. You are foolish and ignorant, and you should therefore simply chant harinama.

His Gurudeva gave Him this mantra:

Therefore, Caitanya Mahaprabhu only told Prakasananda Sarasvati the name of Sri Isvara Puri, and He said that the mantra given by Isvara Puri had made Him like a madman. In His human-like pastimes, if these mantras had not been given by Sri Isvara Puripada, the result could not be as it was. He would not have developed His relationship with Krsna and He would not have tasted such prema. We should try to know all these truths.