What Kind Of Devotee Is Dhruva Maharaja? 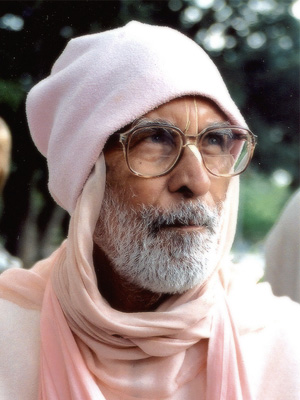 The gopis are beyond any of these categories, for Krsna Himself became the gopis. Krsna divided Himself in two - a right side and a left side. From His own left side He became Radhika, and therefore Radhika is no one other than Krsna Himself. All the gopis are manifestations of Radhika, and that means they are also manifestations of Krsna. It is stated in Sri Brahma-samhita (text 37):

["I worship Govinda, the primeval Lord, residing in His own realm, Goloka, with Radha, resembling His own spiritual figure, the embodiment of the ecstatic potency possessed of the sixty-four artistic activities, in the company of Her confidantes (sakhis), embodiments of the extensions of Her bodily form, permeated and vitalized by His ever-blissful spiritual rasa."]

Dhruva Maharaja was a sakama-bhakta, a devotee whose motive for service is the fulfillment of his material desires. Dhruva performed austerities for the sole purpose of attaining a kingdom. Therefore, when Lord Narayana appeared to him, there was no need to ask for the fulfillment of his desire. Without waiting for Dhruva to ask for his desired boon, Lord Narayana told him, "I am now giving you the kingdom of the whole universe to rule for 36,000 years." After speaking thus He disappeared, and Dhruva began to weep. He cried out, "What a mistake I have made! I was searching for a broken piece of glass and I was fortunate to attain a cintamani stone instead; but now I have lost it."

What is the essence of this history? Although Dhruva Maharaja was initiated by a bona fide guru like Sri Narada Rsi, at the time of his initiation he had so many desires to rule the world. Then, after initiation, he performed very severe austerities, up to the point of not even breathing air. By the will of Lord Narayana he automatically received the position he wanted, for his father came to him and told him, "Everything is yours." Dhruva Maharaja then sat on the throne and began to rule the world. During his reign, his guru Narada and other highly elevated Vaisnavas used to visit his palace, and he served them continually. He served Hari, guru, and Vaisnavas, sometimes when they were visiting him and otherwise in their absence. The visiting Vaisnavas would instruct him in bhakti, and gradually he became elevated. His desire to have a throne totally disappeared.

A karmi has worldly desires, but if he simply worships the Supreme Lord Krsna or His manifestations like Rama, Narasimha, Kalki, and Narayana, all his desires will eventually disappear and pure bhakti will manifest in his heart. Similarly, by the association of Sri Narada Rsi and other rsis, Dhruva Maharaja's desires disappeared and pure bhakti appeared.

Still, something remained - a slight contamination (kasaya), and this was likened to Narada Rsi in his previous life. Because of this kasaya, Dhruva Maharaja wanted to see his mother as he was boarding the Vaikuntha airplane, and that is why he could not attain Vaikuntha. That is why he entered instead Dhruvaloka, located near Rama-priya Vaikuntha planet within this universe. He could not attain any direct service to Narayana there, but because he was a disciple of Narada Muni, it may be that after some time he achieved the Vaikuntha planets beyond the universe.

["The lotus feet of the saintly Vaisnavas are the greatest wealth in this world. O my dear brothers! Please listen attentively. Krsna never forsakes one who takes shelter of the Vaisnavas and worships Him. Others live and die without reason."]

The pure guru, the high-class siksa or diksa-guru, is asraya-bhagavan. Those conditioned souls who try to take shelter of Krsna directly may be rejected by Him, but regarding those conditioned souls who take firm shelter of a bona fide siksa-guru, diksa-guru, or any Vaisnava, Krsna will think, "He wants poison, but how I can give it to him? I must give him the nectar of bhakti." Under this circumstance, Krsna gives bhakti in the end. In the middle the person has to taste the results of his desire, but after this he can become eligible to attain pure bhakti. This is the essence of this history of Dhruva Maharaja.

[Srila Narayana Maharaja:] We can give the analogy of a tree and its fruits. All the fruits come from the tree, so it can be said that fruit is also the tree. However, though the fruits have come from the tree, the fruits are sweet, whereas the tree is not. [At this point Srila Maharaja smiled broadly and said, "Is that answer okay?" as the assembled devotees happily and loudly applauded]

[Question:] "Gurudeva, you said that by nama-abhasa a person gets mukti."

[Srila Narayana Maharaja:] Up to mukti.

[Question:] But what kind of mukti is it? A person chanting nama-abhasa wants to be a devotee, doesn't he?

[Srila Narayana Maharaja:] There are so many kinds of mukti. His mukti is that he will give up worldly desires and attachments. This is also mukti.

["Liberation is the permanent situation of the form of the living entity after he gives up the changeable gross and subtle material."(Srimad-Bhagavatam 2.10.6)]

He will be established in his svarupa, but in this connection, with regards to a devotee who chants nama-abhasa, he will not yet be situated in Goloka Vrndavana. He will be situated in sadhana-bhajana and he will somewhat realize his position as nitya-krsna dasa. At that time he will give up his material attachments.

It is not that he will mix in Krsna by attaining sayujya mukti. Rather, Krsna gives a jiva freedom after his internment (imprisonment). Ahelya became a stone by the curse of her husband, Gautama Rsi. Later, when Ramacandra appeared and mercifully touched that stone with His lotus feet, it again became Ahelya devi, and again Gautama Rsi accepted her as his wife.