[Srila Gurudeva spoke the following lecture in Badger, California, on May 15, 2003. Whether it be the appearance day, or disappearance day, of Srila Madhavendra Puri and Srila Srinivasa Acarya – both are the same:]

Madhavendra Puripada is the root, or first sprout, of prema-bhakti, the prema kalpataru (the desire tree of love of God). The Deity of Srinathaji (Krsna, the lifter of Govardhana) manifested to him and gave him constant darsana. Prahlada Maharaja and Nrsimhadeva had association for only a moment, and Bhagavan often gave His association to Bali Maharaja in the planet Sutala, but Madhavendra Puri is a special maidservant of Srimati Radhika.

Madhavendra Puri has special love and affection for the Divine Couple Sri Sri Radha and Krsna. His devotion is so high. He is the root of Vraja-rasa (the mellow of conjugal love for Krsna), for he brought such love to this world. Sri Isvara Puri received that gopi mood from him and then gave it to Sri Caitanya Mahaprabhu. Such wealth was then bestowed upon Sri Svarupa Damodara, Sri Raya Ramananda, and the Six Gosvamis, and it is thus coming down in disciplic succession. 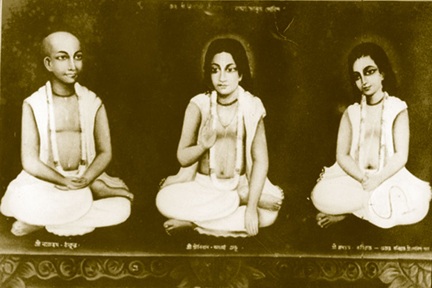 Srinivasa Acarya was the disciple of Srila Gopal Bhatta Gosvami, and He was trained by his siksa-guru, Srila Jiva Gosvami. He introduced many melodies for kirtanas, and he was such an exalted devotee that our Gosvamis depended upon him. They directed him: "You should go and preach in Bengal, and distribute all the literature written by us. Along with his associates, Srila Narottama dasa Thakura and Srila Syamananda Prabhu, he took their order and books, bound for Bengal.

Along the way, some dacoits looted all the books. They thought they'd gained a trunk full of jewels. An astrologer had told the dacoits' leader, "This trunk is full of treasure", and for this they had stolen the cart with all the books. The three devotees became mad in separation from the manifest heart of the Gosvamis – their writings. Srinivasa Acarya sent both his associates to Bengal, telling them, "I'll stay here until I discover the location of the books."

The local king was the leader of all the dacoits, but he was also a devotee. Though he used to loot so many things, he would also meditate and hear scriptures – Srimad Bhagavatam especially. There was a Bhagavata pandita in his council who read aloud and explained Srimad Bhagavatam. Srinivasa Acarya, in a very simple dress, went there one day when a Bhagavata discourse was taking place. He humbly sat in that assembly, hearing from the court pandita. After the Srimad Bhagavatam discourse was finished for that day, Srinivasa requested, "May I comment on what he has explained?"

The king said, "Oh yes, very well; you may explain something about these topics." The pandita had been speaking on Bhramara-gita, but he was not able to explain it very deeply.

Srinivasa Acarya stood up and began to explain it, weeping and making the audience weep. He gave the explanations that were also given by Srila Sanatana Gosvami and Srila Jiva Gosvami in their purports to Srimad- Bhagavatam.

The king at once approached Srinivasa Acarya and offered dandavat pranams, begging, "I want to take diksa initiation from you, and I want to hear Srimad-Bhagavatam." Srinivasa accepted the king and gave him initiation. Then the king offered, "I want to give you some donation for this – guru-daksina. As you like, I can give."

The king immediately answered, "Oh, it is with me! It is with me! My astrologers told me, 'three persons are coming, devotees from Vrndavana, with lots of jewels – more than jewels.' And that is why we took the trunk. We could not tell in what way they are jewels; but now, hearing from you, I know that they are so much more than jewels."

Jewels cannot give krsna-bhakti. They cannot help us. Those books can help us thousands of times more than jewels. You are coming here only by the grace of those books.

In this way, the books of Srila Jiva Gosvami, Srila Sanatana Gosvami, Srila Rupa Gosvami, and all the other Gosvami literature were saved. So this was Srinivasa Acarya, a very high class of devotee.