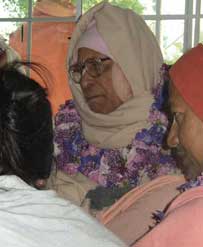 [Every year, when Srila Narayana Maharaja's world preaching tour brings him to Badger, California, he visits the home of Sripad Prana-kisora dasa Adhikari, one of the senior disciples of Srila Prabhupada. The following is a transcription of this year's visit:]

Krsna says in the Ninth Canto Srimad Bhagavatam that, "Devotees are superior to Me. I am not My own. I am captured in the hearts of the devotees. I have given My independence and My everything to them."

So we should not think that devotees are inferior to Krsna - but the devotees must be of that pure standard. The pure devotee does not do anything for himself. Whatever he does is for Krsna.

It has been told in sastra:

["Only unto those great souls who have implicit faith in both the Lord and the spiritual master are all the imports of Vedic knowledge automatically revealed." [Svetasvatara Upanisad 6.23]

We should honor Guru and Vaisnavas as not less than Krsna. They are all on the same platform.

My Guru Maharaja deputed me as the Matha commander of Sri Kesavaji Gaudiya Matha. From there we used to beg chapattis - a half or a whole - from each householder. Somehow we were maintained in this way, but we were penniless. As our Gurudeva was penniless, we were also penniless. That Kesavaji Gaudiya Matha was not in good condition at that time. It was in a wretched condition. It was very old, broken down and about to collapse. But then a devotee came. Do you know who? Prana-kisora Prabhu. [At this point tears come in Srila Narayana Maharaja's eyes and his voice was trembling as he continued:] I cannot fathom how much he helped me He sold his car, the ornaments of his wife, and even his house - and he became penniless. He collected money from here and there, from so many others, and he gave me more than ten lakhs rupees (one million rupees).

Then I began my world-wide preaching, at Sri Kesavaji Gaudiya Matha and after that at Sri Rupa-Sanatana Gaudiya Matha. I cannot forget him and I cannot repay him, and therefore I have come here to his house today - not to repay him, but because I am remembering his service. Now he is penniless and we are somewhat wealthy. I always want him to be happy with his children and wife, and to be more and more strong in Krsna consciousness. He is ideal for you all - showing how one can serve his Gurudeva. He does not speak a word about this; he does not glorify himself. He is very silent.

I have seen in Brhad-bhagavatamrta that Sri Narada glorified Yudhisthira Maharaja with the words: tvam akincana gocaram. He said that although King Yudhisthira had so much opulence and wealth and was ruler of the entire Earth, he was at the same time so humble that Krsna Himself, Parambrahma, the Supreme Personality of Godhead, used to personally come regularly to his kingdom - to his palace The Pandavas never used to go to visit Krsna in Dvaraka or anywhere else; there was no need. Even paramahamsas want to worship the lotus feet of the Pandavas, and therefore Narada told Yudhisthira Maharaja, "We are all paramahamsas, but the five Pandavas and Draupadi are the gurus of the paramahamsas.

Krsna Himself comes to them, and therefore they are the gurus of the paramahamsas. Krsna hardly ever goes to the house of any yogi, Rsi, or Maharsi (a king who is like a sage). He hardly ever goes to eat at their cottages. But very often, by some trick, they used to bring Krsna to their palace. Also by trick, Krsna used to personally go there. Why? To serve the Pandavas by so many means. Rsis and munis meditate on Him, but Krsna does not give them His darsana even in their trance. On the other hand, that very Krsna goes to the Pandavas' palace and serves them.

Krsna used to serve Maharaja Yudhisthira by pranama (offering obeisances). Who is qualified to receive the pranama of Krsna? None. Still, He used to offer pranama to Yudhisthira. He also served Arjuna, Bhima and all the other Pandavas, because of their ideal devotion. Though we want to go beyond their bhakti, their bhakti is very high.

You should hear all these subject matters and be very strong devotees. Don't be weak. I see that after the departure of Parama-pujyapada Srila Bhaktivedanta Swami Maharaja most of his disciples became bewildered and very weak. Most of the brahmacaris became householders. If Srila Swami Maharaja had still been in this world, I think that most of the brahmacaris would never have become householders. To be a householder is not bad if one is like Yudhisthira Maharaja, Srivasa Pandita, Sri Raya Ramananda, or Sri Advaita Acarya. So we should not be weak. We should be like them and do bhajana.

At present we cannot see Krsna, and therefore we cannot serve Him. By serving His name, however, He will come to us and say, "O, I will serve you." Bhakti is so high. Always be strong and have belief in Krsna.