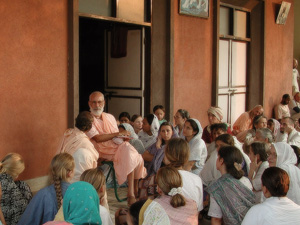 [The devotees of the Birmingham Sri Gour Govinda Gaudiya Matha had a special arrangement with their Sikh friends of the Namdhari Gurdwara temple. For the third year in a row Srila Narayana Maharaja's week-long festival of hari-katha would be held in their large assembly hall, and over 200 of the 500 devotees attending would also be able to live there during that time. Moreover, despite certain obstacles, several of the Sikh leaders attended Srila Maharaja's classes. Srila Maharaja expressed his gratitude to them in the following class:]

Guru Nanak is a guru who gave transcendental love and affection for the Supreme Lord. Gobind Singh is in his dynasty, or guru-parampara, as we see there in his portrait. The Sikhs were originally Hindus, and they are still Hindus. Their religious principle was to save Hindu and Sanatana-dharma from the clutches of the Muslims. At that time the Moguls, headed by Aurangzeb and others, were very aggressive. Gobind Singh led his followers in making a vow that, "If we will not defeat the Moguls and they do not leave India, we will not shave our heads and we will not shave our beards. They took the vow symbolically on their hands, and therefore they wear a karha on their wrists. You should see this. [Srila Narayana Maharaja points to their bracelets] They vowed to wear the bracelets "Until we bring Hindu and Vedic culture independence from the Mogul rulers." They are not separate from the devotees of India; they are followers of Sanatana-dharma; they also know that Krsna and Rama are the Supreme Lord.

Guru Nanak used to tell all these facts to his devotees everywhere, and they served everywhere. Gobind Singh lost his two sons because they vowed, "We cannot accept Muslim religion." The Moguls put within a wall, and the wall was being constructed around them. When that wall became up to the sons' waists the Moguls said, "Will you accept?"

Then, when the wall came up to their chests the Moguls again said, "Now you will have to accept."

They replied, "Never!" and when the Moguls then made the wall up to the sons' neck they said, "There is some time to change your mind; otherwise we will cover you."

Still they did not accept, and they were covered by that wall. How much great sacrifice the Sikhs performed for India, to save Sanatana Vedic dharma!

We are now here in their temple. They should save us and give us shelter so that we can preach Sanatana-dharma in the line of Guru Nanak teaching that Krsna and Rama are the Supreme Personality of Godhead. By chanting and remembering the Supreme Lord we can be happy, otherwise we can never be so. This is the mission of our Sanatana Vedic dharma, of Guru Nanak, and of Gobind Singh and his guru-parampara up to the present time.

Some mad Sikhs think, "We are separate from Sanatana-dharma and we should fight the Hindus. A few Sikhs of this nature want "Sikhisthan" or something like that. But there are so many intelligent and pious Sikhs almost all Sikhs are pious and intelligent. Pure Sikhs continuously save Hinduism everywhere; so many thanks that they have given us shelter here, to preach our mission of Rama and Krsna, Gita and Bhagavatam.

My blessings to them, and my prayer to Krsna that He will be merciful to them and make them happy.