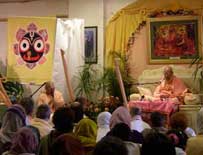 We have come to remind you that you are part and parcel of the Supreme Lord, but you have forgotten him. He can create millions and millions of universes in a moment, and at the same time, in a second, He can demolish them all and again create them all. He is very beautiful, sweet and very merciful.

He is very worried for us. That is why He sometimes descends from Goloka Vrndavana with all His associates, and sometimes He also sends His very powerful associates to remind us. Without His mercy we cannot realize our transcendental form, and we cannot be happy. There is no other way to be happy.

This world is full of misery and very perishable. Very soon we will become old, and when we become too old we will have to give up these bodies. What we are collecting from this world - money position and so on - we cannot take with us. You are not this physical body, so don't quarrel because of it. Don't worry for this body; it is a bag of urine, stool, blood and so many similar substances. The soul is there and it is eternal, but maya has captured it in this body. You should always realize this. Very soon, whether you want to or not, you will have to give up this body. Only the results of your good and bad actions will go with you, and again you will have to rotate through the various species of life.

However, when you surrender at the lotus feet of a qualified and bona fide sat-guru and obey his instructions, you will very soon realize, "Oh, we were in a dream. We were in jail." Then you will see that, "We are in Goloka Vrndavana where there is no endless chain of birth and death, no old age, nothing of the sort. There is only service to the Supreme Lord, and we are forever sinking in the endless and depthless ocean of love and affection."

Our rsis and maharsis (saintly kings) realized this fact millions of years ago. Especially Krsna and Rama came to this world and gave the Bhagavad-gita, Srimad Bhagavatam, Ramayana, and the Vedas and Puranas, which explain that we are eternal servants of Krsna. And Krsna especially is the embodiment of love and affection. You can realize all these truths by reading Srimad Bhagavatam.

Sri Vyasadeva had first divided the Veda, manifested many Puranas, the Mahabharata and Bhagavad-gita. He had also manifested the Upanishads, but still he was not happy. Then his Guru, Narada Muni, came and asked him, "Why do you look so worried? You know and have written everything, but still you are unhappy."

Srila Vyasadeva replied, "O Gurudeva, I don't know. Please tell me why I am unhappy." A disciple should surrender to the lotus feet of Guru in this way. Vyasa is Lord Narayana, but he has shown us this ideal.

Narada said, "You have given preference to dharma, artha, kama, moksa (material religion, economic development, sense enjoyment in this world and in heaven, and liberation) but you have not written about the sweet pastimes of Krsna. You have not written that Krsna, the Supreme Lord, can come in the form of a very beautiful son. You have not written that He goes door to door to the houses of all the gopis, stealing their butter - not their butter, but their hearts We cannot be worried about attaining Him, because we don't realize our situation. We cannot go to Him, but He Himself descends. He realizes, They are all My children; they are My parts and parcels.' We cannot earnestly call Him, but He calls us by His flute: Come on! Come on; all! Dance with Me, sing with Me, and be happy!' This is Rasa. Have you written all these truths in the Mahabharata, Bhagavad-gita or the Puranas?"

Vyasadeva replied, "No I don't know about all these truths"

Narada continued, "How He serves His father and mother, Nanda Baba, and Yasoda. How, even though He is the Supreme Lord, He is controlled by them and He forgets that I am the Supreme Lord.' His mother chastises Him and says, "I will not let You come on my lap. I will not give You my breast-milk. You should stay far away from me!' To whom is she saying this? To the Supreme Lord.

"Do you know about the sakhas (cowherd boys) like Subala and Sridama? They defeat that Supreme Lord and order Him, You should be my horse!' Krsna then becomes like a horse, and they get up on His shoulders and call out, You should go, go - run away!' And sometimes, when a sakha's mother has given him a sweet preparation, he takes it from his mouth and places it in Krsna's mouth. How wonderful this is! Have you written all these facts?"

Narada then said, "Have you written that Krsna says, O Gopis, I will not be able to repay you in thousands or millions of years. Please be merciful to Me.' The Supreme Lord is saying, 'I cannot repay your love and affection. You left everything for Me - position, dharma, chastity, and fear from superiors.' Krsna cannot give up His father or mother. He cannot give up His queens in Dvaraka He cannot give up Arjuna or Bhima. He cannot even give up those in this world who are chanting His names and have taken His shelter. He cannot even give up one sadhaka- bhakta. But the gopis gave everything from top to bottom for Him, and therefore He tells them, 'I cannot repay you.'

"Have you written this?"

"Than what you have written? Nothing. And that is why you are not happy."

"How can I write these pastimes?"

"Be in trance, and by my mercy, in your trance, in your meditation, you will see these pastimes. Be surrendered and take help from bhakti-yoga."

We can know from Srimad Bhagavatam that Krsna is not our goal; krsna-prema is our goal. And you should know the reservoir of that prema - the gopis. Among the gopis, Candravali and Radhika are prominent, and among them Radhika is the most prominent. She is the complete reservoir of that love and affection.

Our aim and object is to obtain that love and affection for Krsna, and therefore prema is prayojana. Prayojana means the ultimate goal of our bhajana - our goal of life. If you can obtain even a glimpse or minute part of that endless ocean of love and affection, the whole universe will be able to drown there. You will be happy, Krsna will be happy, and thus your life will be successful. There is no other way to be happy.

Everywhere I travel I explain from Sri Caitanya-caritamrta Adi-lila chapter three and four, from from Srimad-Bhagavatam, and from Brhat-bhagavatamrtam - that our aim in life is to obtain love and affection under the guidance of the gopis. We cannot obtain the mood of Radhika. It is so high that even Krsna was greedy for Her mood. We can obtain something, however, and that has been told in Caitanya-caritamrta Adi-lila chapter 4:

["May the Supreme Lord who is known as the son of Srimati Saci-devi be transcendentally situated in the innermost chambers of your heart. Resplendent with the radiance of molten gold, He has appeared in the Age of Kali by His causeless mercy to bestow what no incarnation has ever offered before: the most sublime and radiant mellow of devotional service, the mellow of conjugal love." (Sri Caitanya - caritamrta Adi 1.4).]

We can obtain service to Radhika in a manjari mood, the mood of a maidservant, and that is the highest goal of our bhakti practice.

How do we obtain this goal? We will have to start from the beginning of the process:

["In the beginning there must be faith. Then one becomes interested in associating with pure devotees. Thereafter one is initiated by the spiritual master and executes the regulative principles under his orders. Thus one is free from all unwanted habits and becomes firmly fixed in devotional service. Thereafter one develops taste and attachment. This is the way of sadhana-bhakti, the execution of devotional service according to regulative principles. Gradually emotions intensify and finally there is an awakening of love. This is the gradual development of love of Godhead for the devotee interested in Krsna consciousness." (Bhakti-rasamrta-sindhu 1.4.15)]

[Part 3 of this class, entitled "A Summary of Sri Bhajana-rahasya", will come shortly.]