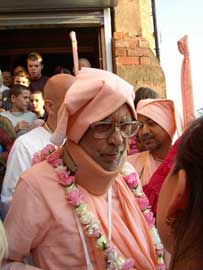 There are several sastric reasons behind rules and regulations. Here are a couple, given by Parama-pujyapada Srila Narayana Gosvami Maharaja in a short darsana to newcomers.

Devotee: Why do we receive the gayatri mantras at special times? What is the significance of that?

Srila Narayana Gosvami Maharaja: In this world we see the same thing. Why do people begin their financial month in April? In this world everything is organized in relation to some auspicious day. According to the graha-naksatra (arrangement of stars and planets) certain times become auspicious. It has therefore been told that we should choose a special time for each and every activity.

Devotee: Why are those times auspicious?

Srila Narayana Gosvami Maharaja: According to a person's janma-naksatra (arrangement of stars at the time of one's birth) and other things, certain times are auspicious for him. Similarly, Diksa should be given on an auspicious day.

Devotee: And regarding the times for saying the diksa mantras  why at those particular times?

Srila Narayana Gosvami Maharaja: There are some reasons. In the morning, at the time of brahma-muhurta (one and a half hours before sunrise until sunrise), our minds and hearts becomes cool. There is less anxiety at that time; we haven't yet heard anything from the world. It is a very peaceful time. In midday also, when the sun is overhead and there is a meeting between morning and afternoon, that time is also auspicious. So we should try to concentrate at that time, as concentration may come easily at that time. This is also true at sunset, the time between night and day. These times have been discovered by our rsis (sages). We cannot explain all the details now, but there are so many things that are known and considered in India. In other places people do not care for this, but Indian scientists, the rsis, used to know all these things.

We should not take eggplant during Caturmasya or on Ekadasi, because some germs automatically go inside them at that time. What we avoid during Kartika month and during Caturmasya is partly due to this. Our rsis have discovered the reasons that at what time, in what plant, in what fruit, what will come. During the month of Bhadra (August-September) you should not take yogurt. So many germs enter at that time. In India these are Indian germs and outside India the germs are of another nationality In America they will be American germs that enter the eggplants and yoghurt.