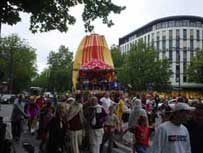 [The final hari-katha festival held by Parama-pujya Srila Bhaktivedanta Narayana Maharaja on his 2003 world-preaching tour was in Berlin, Germany. That visit was special, because it coincided with the Ratha-yatra festival period in Jagannatha Puri. Wherever Srila Maharaja happens to be at the time of Ratha-yatra he lectures for one week on that subject. Each year he repeats some katha from the previous years' talks, each year he unfolds new enlightening understandings and angles of vision, and this year he did the same:]

We are very lucky to be here at the time of the sacred Chariot Festival of Lord Jagannatha, under the guidance of so many elevated devotees.

["The verdict of all revealed scriptures is that by even a moment's association with a pure devotee one can attain all success." (C.C. Mad. 22.54)]

You are fortunate to have come here. I want to help all, without consideration of caste and creed; whether one is an ISKCON devotee, or any other Gaudiya Vaisnava, or anyone else.

This Chariot Festival of Jagannatha-deva is very popular in India, and also outside of India, due especially to the preaching of Parama-pujyapada Srila Bhaktivedanta Svami Maharaja. He knew that neophyte devotees can progress simply by kirtana, Ratha-yatra and other such devotional activities. He knew that by such activities they will realize who Lord Jagannatha really is, who Sri Vrajendra-nandana is, who Srimati Radhika, the power of Vrajendra-nandana, is, and who Sri Caitanya Mahaprabhu is. 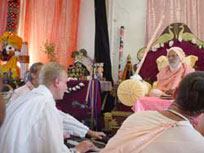 Srila Maharaja preaching in Berlin I have given many classes on the subject of Ratha-yatra. I have spoken about the Ratha-yatra-related topics many times, very deeply, and my classes have now come in the form of a book. Everything is there - if you want to know the details you can get this book, called "The Origin of Ratha-yatra". Reading is one thing, however, and hearing from a bona fide Vaisnava a separate thing. By reading you can know something, but by hearing from a bona fide Vaisnava you can realize something. I have explained what I have heard from my Gurudeva and other Vaisnavas, and what I know from having attended the Chariot Festival many times.

Prior to the appearance of Sri Caitanya Mahaprabhu there were also yearly Chariot Festivals, but they were lifeless. The King and his officers used to perform the festival and an elephant used to pull the chariot, but Sri Caitanya Mahaprabhu changed all this. He completely changed the mood. He introduced the "new" idea of the gopis carrying Sri Krsna from Kuruksetra on the chariot of their hearts.

It has been stated in Srimad-Bhagavatam and other scriptures:

[The ladies of Vraja are the most fortunate of women because, with their minds fully attached to Lord Krsna and their throats always choked up with tears, they constantly sing about Him while milking the cows, winnowing grain, churning butter, gathering cow dung for fuel, sitting on swings, taking care of their crying babies, sprinkling the ground with water, cleaning their houses, and so on. By their exalted Krsna consciousness they automatically acquire all desirable things. (SB 10.44.16)]

Sri Krsna always wants to be seated in the hearts of the gopis, who took Him from Kuruksetra, pulling Him by their hearts. Controlled by them, He rode on the chariot of their hearts to Vrndavana. This is the main cause for the Chariot Festival, and also for the appearance of Jagannatha, Baladeva and Subhadra in that form.

If you desire to bring Jagannatha-deva, the temple of your heart should be totally washed. If the temple is not clean and cool, Lord Jagannatha will not come.

Do you know what uttama-bhakti is?

["The cultivation of activities that are meant exclusively for the pleasure of Sri Krsna, or in other words the uninterrupted flow of service to Sri Krsna, performed through all endeavours of the body, mind and speech, and through the expression of various spiritual sentiments (bhavas), which is not covered by jnana (knowledge aimed at impersonal liberation) and karma (reward-seeking activity), and which is devoid of all desires other than the aspiration to bring happiness to Sri Krsna, is called uttama-bhakti."]

You should not have any desire other than to serve and please Sri Krsna. No worldly desires, sense gratification, aparadhas, and anarthas should remain in your hearts. Also, your desires should not be covered with jnana, karma, yoga, tapasya and other such activities. If one always serves Krsna, only to please Him, and is continuously under the guidance of pure Vaisnavas, bhakti will manifest in his heart; otherwise not. Krsna rides on the bhakti chariot, which is in the heart of Srimati Radhika and the gopis. Their hearts are the chariot on which He can be carried, and this idea is the main substance of the Chariot Festival.

Come with me to the origin of the festival, where there are many deep meanings and teachings. First we should learn the history of Indradyumna Maharaja. Therein we learn that without the help of Vaisnavas we cannot understand that we are a part and parcel of Lord Krsna and we are His eternal servants. Our bodies and everything in relation to these bodies are mortal. When you will serve Krsna under the guidance of a bona fide guru, you can realize all these truths; otherwise it is not possible.

Indradyumna Maharaja was a very great king, and he was happy in his kingdom. One day some exalted Vaisnavas, after taking darsana of Lord Nila-madhava, went there by chance - not by chance but by the wish of Sri Krsna. Indradyumna Maharaja was a very elevated devotee, but he had not had the opportunity to take darsana of Sri Krsna Bhagavan - so Krsna sent pure Vaisnavas to his kingdom. They met with him and told him about the glories of Sri Nila-madhava. They told him that if even a crow gives up his body desiring to see Him, he will manifest a spiritual four-armed form and go to Vaikuntha. If anyone has decided, "Tomorrow I will go to Jagannatha Puri and see Nila-madhava", but in the night he leaves his body, he will at once become four-handed and go to Vaikuntha. How powerful is this deity!

Maharaja Indradyumna immediately decided, "Oh, I must take the darsana and render service to Nila-madhava. But how will this happen?" He knew that he would go to Vaikuntha by seeing Nila-madhava, but he did not know the process to see or serve Him. Then, his advisor, the son of his priest, went searching and skillfully discovered Him. Although he was a brahmana, in order to discover Lord Krsna he married a lower, sabara caste girl, and by the help of his wife, Lalita, he found Him. He returned to Indradyumna Maharaja and told him the Lord's whereabouts, and then he personally brought the king there. So, if you can associate with a high class of devotee, a bona fide guru, he can give you the process. If you follow such a guru you will be able to take the darsana and service of Lord Krsna, otherwise not.

Vidyapati went and discovered Nila-madhava, but by the time he brought Indradyumna Maharaja there, the deity had disappeared. Why did this happen? It took place to increase the greed of the devotee. In order to increase this greed, Lord Krsna may hide Himself. Sometimes He hides from the sakhas, and then they very eagerly cry out, "O Krsna, where are You? Where are You?" Regarding Srimati Radhika and the sakhis, sometimes He hides and sometimes He goes to the kunja (grove) of Candravali and other gopis like her. At those times, absorbed in lamentation, Srimati Radhika and the gopis send messengers to cheat Candravali and her sakhis, skillfully attract Krsna, and bring Him back to Srimati Radhika.

Lord Nila-madhava disappeared, but by the help of adi-guru Lord Brahma, Vidyapati understood that he could discover an even more beautiful form then the four-armed Nila-madhava.

In our guru-parampara, the first spiritual master (adi-guru), Lord Brahma, is a very exalted devotee and he can give us more than what we desire. Nityananda Prabhu is also guru. He is the guru of Brahma and others. He is directly Baladeva Prabhu, who can give Sri Krsna and His service by his causeless mercy. If your guru is not bona fide, you cannot have the darsana of Krsna or pure devotion to Him in any way. If you don't have a bona fide guru, or if your guru has deviated, then, without wasting a moment's time, without delay, you should at once choose a bona fide guru. Don't waste your time and your life. It is only possible to enter the process for obtaining the service of Sri Krsna by the help and mercy of a bona fide guru, or one of the original acaryas like Sri Narada Rsi, and Lord Brahma. Only then can we discover the nature of pure devotion.

Lord Jagannatha is superior to the Nila-madhava manifestation of Krsna. Sometimes Jagannatha appears as Krsna Himself - with the gopis - but only Sri Caitanya Mahaprabhu and His associates can realize this.

Only by the mercy of Lord Krsna Himself, and by the mercy of His associates, can we achieve His service. While King Indradyumna meditated at the shore of the ocean at the Bay of Bengal, four trunks were floating in the ocean with the symbols of a lotus, club and conch, and especially cakra. An aerial voice then called out to him, "Take out these trunks. Take them to the temple and make a Sri Vigraha." Who would be able to do this? Krsna Himself, Jagannatha Himself, came in the disguise of an old and very beautiful brahmana carpenter.

That carpenter requested 21 days to carve Jagannatha, Baladeva, Subhadra and Sudarsana-cakra. He told the king and his associates, "Don't open the door. After 21 days, when I am finished, I will open it and you can see the Lord." Then, Jagannatha Himself manifested in the heart of Queen Gundica and inspired her to tell the king, "I want to see what became of that carpenter. He has been in the room for 14 days and has not made any sound. He has not taken any fruit or anything else to eat. If he dies, you will be responsible for that." She insisted, "Please open the door."

The door had to be broken, because it had been locked from the inside, and as soon as they entered the carpenter at once smiled and vanished. What is the meaning? Why did he smile? There is a hidden meaning here. That carpenter was thinking, "What I wanted has been done. I never wanted to make the full deities. I wanted to fulfill the desire of Narada Rsi, who, upon seeing Me melt into the form of Jagannatha, had requested Me, "Somewhere in the world, please remain in this form, which manifested by hearing about Your pastimes in Vraja. By such hearing You melted; half your hands melted, Your feet melted, Your entire body melted, and all that remained was this murti with large eyes." Remembering this, the carpenter smiled, thinking, "Oh, my job is finished. I am successful."

If you are under the guidance of Vaisnavas, and if those Vaisnavas and Lord Krsna will be merciful to you, Krsna will manifest and you can know Him. No intelligence, no learning, no qualification - nothing else - will suffice. Krsna alone chooses you to be His servant. If He thinks, "That devotee is qualified for My worship", He will give Himself; otherwise not. Take the shelter of any self-realized guru and Vaisnava, and he will pray for you. Bhagavan Sri Krsna's mercy will then fall upon you.