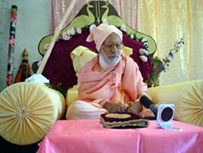 What is the hidden deeper meaning of Gundica-marjana, the cleaning of the Gundica Temple? Sri Caitanya Mahaprabhu told some of the associates of the king, the king's guru Kasi Misra, the head pujari, and Sarvabhauma Bhattacarya, "I want to do Gundica-marjanam." In previous years, the King would tell some of his servants, "Go and clean the temple." But what could they do? They could sweep, but not with love and affection.

All other persons looked on and wondered, "What new thing is going on? They are all totally mad. Why the brooms and jugs?" Some were laughing, and some were in wonder, and some were looking on very gravely.

Sri Caitanya Mahaprabhu and His associates had gone to the temple by the medium of sankirtana. Once there, they all began to clean the temple, and with their brooms they collected many very big stones and and stone chips. What is the deeper meaning of "big stones"? Aparadha - Vaisnava-aparadha (offenses to Vaisnavas) and nama-aparadha (offenses to the holy name). When this was done Sriman Mahaprabhu threw them out of the temple - out of the "heart" temple. What did He throw out? Vaisnava-aparadha and nama-aparadha.

Don't commit these aparadhas. Be careful regarding Vaisnava-aparadha, guru-avajna (ingratitude and disrespect towards Sri Guru), sastra nindanam (blaspheming Vedic literature) and the rest of the ten kinds of offenses to the holy name. Be also careful to avoid dhama-aparadha (offence to Lord Krsna's holy abodes like Sri Vrndavana, Sri Navadvipa and Sri Jagannatha Puri); and also avoid the anarthas explained by Srila Visvanatha Cakravarti Thakura his Madhurya Kadambini: svarupa-brahma, asat-trsna, hrdaya-daurbalya, aparadha, laya, viksepa, and all others.* [see endnote 1]

["A sober person who can tolerate the urge to speak, the mind's demands, the actions of anger and the urges of the tongue, belly and genitals is qualified to make disciples all over the world." (Upadesamrta, sloka 1)]

["One's devotional service is spoiled when he becomes too entangled in the following six activities: (1) eating more than necessary or collecting more funds than required; (2) overendeavoring for mundane things that are very difficult to obtain; (3) talking unnecessarily about mundane subject matters; (4) Practicing the scriptural rules and regulations only for the sake of following them and not for the sake of spiritual advancement, or rejecting the rules and regulations of the scriptures and working independently or whimsically; (5) associating with worldly-minded persons who are not interested in Krsna consciousness; and (6) being greedy for mundane achievements." (Upadesamrta, sloka 2)]

["Thinking oneself to be even lower and more worthless than insignificant grass which has been trampled beneath everyone's feet, being more tolerant than a tree, being prideless, and offering respect to all others according to their respective positions, one should continuously chant the holy name of Sri Hari." (Siksastaka, sloka 3)]

You will have to give up all bad habits, but I know that you cannot. We are very fallen. Who can follow these verses? Sri Caitanya Mahaprabhu, Sri Svarupa Damodara, Sri Raya Ramananda, Sri Brahmananda Bharati, Sri Paramananda Puri, Sri Nityananda Prabhu, Sri Advaita Acarya, Sri Pundarika Vidyanidhi, Sri Vakresavara Pandita and others like them. They can do so.

First take shelter of your Gurudeva, and following him, take the shelter of all the pure devotees in his line - those in the guru-parampara. Call out to them, "O Svarupa Damodara, O Ramananda Raya! Please give me your shelter, I am dying." Call out in this way, while always weeping.

Sriman Mahaprabhu was acting as an acarya; He was doing the cleaning Himself and then teaching others. Some so-called guru may say, "I don't do it, but I tell my disciples, "You should chant at least 64 rounds." His disciples cannot ask him, "How many rounds do you do?" They fear, but any very bold disciple may ask, "How many rounds are you doing? And in what mood are you doing them?" That bogus guru, that kan-guru, will not be able to reply, but a real guru can say, "Oh, I try to do 64, sometimes more then that."

In what mood will that real guru be chanting? Gopijana-vallabhaya svaha - in that mood. How can a bogus guru advise you to engage in these elevated activities of bhakti? They don't have a trace of these moods or the meaning of Gopal-mantra, kama-gayatri, or even Brahma-gayatri. At least he will never fall down - because he has been fallen since the beginning.

By His own behavior Sriman Mahaprabhu teaches all of us that we should especially try to give up pratistha, false pride. He Himself is Sri Krsna and Srimati Radhika; yet, when a Gaudiya bhakta was putting water on His feet and then drinking that water, He appeared displeased - though He was pleased. He told Sri Svarupa Damodara, "Oh, this Gaudiya; what is he doing? I will go to hell. In front of the temple deity - not deity, but the deity's simhasana (throne) - he is washing My feet and drinking that water. I will certainly have to go to hell."

Sri Svarupa Damodara at once pushed that boy, took him out of the temple and told him, "You have done very well. But others should be careful and therefore Sri Caitanya Mahaprabhu was externally angry, just to teach others. Anyway, I will ask Him to be merciful to you. Wait here and I will call you." He returned and said, "O Mahaprabhu, that person was quite ignorant and foolish. He does not know anything, so please be merciful to him."

We should not think, "I am a bona fide Vaisnava. I am giving the remnants of my prasadam to all, and by my prasadam their hearts can become pure." Srila Bhaktivinoda Thakura has written something about this in his song Krpa Koro Vaisnava Thakura:

By thinking that I am superior (guru-abhimana) and giving my remnants to others, I will be burdened with the weight of false pride. Let me always identify as your disciple and not accept worship or praise from others (verse 4)

Try to follow these Teachings. Try to compare yourself with Vaisnavas like Srila Rupa Gosvami and Srila Raghunatha Gosvami, and also Srila Prabhupada. Where is their bhakti and where is yours? You cannot even control your sense gratification. If a naked lady stands in your presence you cannot check your eyes and your heart. I heard from a devotee that Srila Bhaktivedanta Swami Maharaja told someone, "I can be there without any disturbance, but you cannot." So we should try to follow these principles given by Sri Caitanya Mahaprabhu.

Sriman Mahaprabhu told Srila Jagadananda Pandita, Sri Svarupa Damodara, and others who were distributing mahaprasada after the cleaning of the Gundica Temple, because He knew the devotees liked sweets, "Give sweet preparations to all the Vaisnavas, and to Me only give laphra." Laphra means mixed boiled vegetables. Mahaprabhu Himself acted in this way, so don't think, "Good preparations should be given to me, and the other, less tasty dishes should be given to others." There are so many hidden meanings in the history of Gundica-marjana.

[*Endnote 1 - (From Bhakti-rasamrta-sindhu-bindhu by Srila Visvanatha Cakravarti Thakura) Anarthas are of four kinds: (1) svarupa-bhrama (illusion about spiritual identity), (2) asat-trsna (thirst for that which is unreal; that is, material enjoyment), (3) aparadha (offences) and (4) hrdaya-daurbalya (weakness of heart).

Hrdaya-daurbalya is of four kinds: (1) tuccha-asakti (attachment for useless things), (2) kuti-nati (deceitful behavior. The word kuti-nati may be broken down into the constituent parts ku, bad or evil, and na or nati, that which is forbidden. In that case it would mean doing wicked deeds or doing that which is forbidden), (3) matsarya (envy) and (4) sva-pratistha-lalasa (desire for one's own fame and prestige).