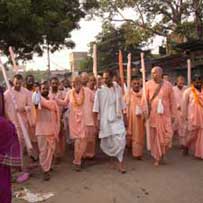 Last night, most unfortunately, one of our very senior Vaisnavas, Kalacanda Brahmacari Prabhu, left this world just across the road in the Mathura Hospital. He had come to the Matha at a very young age, at the age of sixteen, and he served in this Matha and different Mathas for thirty-seven years. He took diksa from my Gurudeva in Navadvipa, he stayed in different Mathas there in Bengal, and then he came here and spent many years with me at Sri Kesavaji Gaudiya Matha. He was very expert in understanding siddhanta (philosophical conclusions), and his hari-katha had the power to attract many different types of persons.

Of all types of separation, which is the most painful? It is the separation from Vaisnavas. We know that the jiva has no birth or death, but we can feel separation for the Vaisnava. Who will feel separation? Only the person who has mamata, a sense of "mine-ness" towards that Vrndavana, or one who can understand the greatness of that Vaisnava.

We spend great amounts of money on doctors, food, medicine and going here and there, but we should understand that these things can never save us in the end. Everyone is under the grip of time and his own karma. We are all helpless before our own karma.

It is very hard for us to tell who is a mahatma, who is great or who is not great. Those who are great keep themselves very hidden. Externally we cannot tell who is great; that person who performs the most bhajana is great. One person may be living in the temple for fifty years, and another, a new person, may come and be with us for only five or six years; but if that second person has good samskaras, he can make great advancement very rapidly.

Kalachanda Brahmacari was very fortunate to have left his body here in Sri Mathura-dhama. He left through his mouth, and he was chanting harinama at that time. I personally applied tilaka on his body and gave him a garland and flowers. Many Vaisnavas were performing kirtana in his last moments, and he left his body in this very fortunate situation. No ordinary Vaisnava can get this type of chance. Today, therefore, we will remember his lotus feet and offer puspanjali.

If you are very careful to avoid offences to the lotus feet of Hari, Guru and Vaisnavas, you will attain krsna-bhakti very quickly.

["One should associate with devotees, chant the holy name of the Lord, hear Srimad-Bhagavatam, reside in Mathura and worship the Deity with faith and veneration." (Sri Caitanya-caritamrta Madhya 22.129)]

["Krsna who is known as Govinda is the Supreme Personality of Godhead. He has an eternal blissful spiritual body. He is the origin of all. He has no other origin and He is the prime cause of all causes." (Sri Brahma-samhita 5.1)]

In this connection Isvara refers to Sri Krsna, but anyone who fully knows that para-tattva can be said to be like Isvara or Bhagavan. Sri Krsna has no beginning, as stated in the "catuh-sloki" of Srimad-Bhagavatam.

Sri Krsna Bhagavan, in His form as Lord Narayana, told Lord Brahma, "In the beginning there was only Me. What is this creation? It is nothing but Me. And after the creation is dissolved there will only be Me." It is only to understand all these truths that Krsna has given us the human form of life - it was only given for performance of bhajana.

There are many manifestations of Bhagavan but only Lord Krsna can be called Svayam Bhagavan. Rama, Matsya, Kurma, and Nrsimhadeva are also Bhagavan, but only Krsna performed pastimes like the rasa-dance - and that is why He is called Svayam Bhagavan. Rasa-lila can only be performed in Vrndavana, and that is why Krsna is raso-vai saha, the Ultimate Enjoyer, only in Vrndavana.

Only Sri Krsna is purnatamma, the most complete, and His complete form is raso-vai saha. He is likened to the moon, because the moon is rasa-maya; it nourishes and protects everyone. Krsna is lavanya-sara, the essence of beauty; like a pearl, with its luster coming from within. He is very attractive and His luster is extremely beautiful. He is decorated with His pitambara, many varieties of jewels, and with a peacock feather in His hair. He places His peacock feather at the lotus feet of Srimati Radharani, and everything He wears and carries is only for Her happiness and happiness of the Vrajavasis.

Krsna has special qualities, which no other incarnation has. Only He can say:

["O gopis, I am not able to repay My debt for your spotless service, even within a lifetime of Brahma. Your connection with Me is beyond reproach. You have worshiped Me, cutting off all domestic ties, which are difficult to break. Therefore please let your own glorious deeds be your compensation." (Srimad-Bhagavatam, 10.32.22)]

Can Sri Ramacandra say this? No. Lord Rama can leave Sita in the forest, but can Krsna ever do such a thing? He can never do so. Krsna Himself can go to the forest, but He cannot ever leave His devotees there. The question then arises, "Why did Lord Krsna go to Mathura?" He only did this to make the Vrajavasis happy. He could understand that even though the gopis were directly meeting with Him when He was in Vrndavana, they could not be fully satisfied because during their meeting they felt separation. Therefore, in order to give them happiness, He left for Mathura. While He was in there in Mathura, the Vrajavasis would sometimes have sphurtis (momentary visions), wherein they would see that He had directly come to them.

In his prayers Lord Brahma stated, "Krsna is very kind. Putana tried to kill Him, but He took away all her anarthas and sent her to Goloka."

Lord Krsna is also the topmost politician. Of all politicians, He is topmost. When He was in Dvaraka, Duryodhana and Arjuna both came to ask Him to join their side of the fighting. Krsna replied that He would join the side of whomever He would see when He would first awaken the next day. Duryodhana came first and he sat near His head, and Arjuna, in dasya-bhava, sat at His feet. Understanding Duryodhana's intentions Krsna pretended to sleep, and when Arjuna arrived, He stood up straight, saw him first and said, "Oh Arjuna! What are you doing here?"

Duryodhana said, "Oh no, no! I was here first."

In order to appease Duryodhana, Krsna said, "Oh Duryodhana, what do you want? You can have my whole Narayana-sreni, My armies, generals and many types of weapons. Or, you can have Me on your side. But I will not fight; I will not take up weapons. Which one do you want?" Duryodhana considered, "If Krsna does not fight, of what use is He?" He very happily chose Krsna's personal army. At that time Krsna told Arjuna, "I don't know why you chose Me. Not fighting, I am of no use to you."

Arjuna replied, "Oh no Krsna. You can do everything. Therefore I want You to sit on my chariot - not only my fighting chariot, but the chariot of my heart. I want You to control my horses, the horses of my senses." How Krsna reciprocates in every single way!

There was a personality whose name was Barbarik, and he was a very famous fighter. Before the Battle of Kuruksetra, which lasted for eighteen days, he said to Krsna, "Alone I can kill all the Kurus."

Krsna asked, "How is that possible? Can you show me?"

He replied, "Oh yes!" He took an arrow, put some black powder on it, shot it, and that arrow touched the heart of every person in the army. He then picked up the next arrow and said, "Now I have marked my target. With this arrow I will pierce everyone's heart." Before he was able to do anything, however, Krsna chopped off his head. His head then said, "Why did you do that?"

Krsna said, "This was for your benefit."

He then requested, "Okay, now I am dead, but I want to see the battle of Mahabharata."

Krsna had given him His sakti. His head was still living, and now Krsna put that head on the top of a tree.

Krsna said, "Why don't we ask an independent third party?"

"O brother, can you tell who did most of the fighting? Who killed the greatest number of enemies?"

"I can tell you one thing for sure - nobody did anything. Krsna alone did everything; it was actually He who killed everyone. He is the greatest fighter." In this way Krsna dispelled the false ego of Bhima and Arjuna.