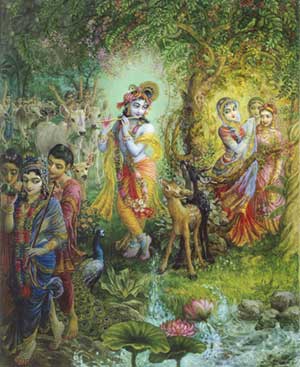 [Before speaking about Sri Krsna's glories on Janmastami, Srila Gurudeva leads the assembled devotees in singing Sri Jayadeva Gosvami's bhajana, Sri Mangala-gtam. He says that because today is Krsna's Appearance Day, we should begin by first of all singing this kirtana. Srila Maharaja then explains the deep meaning of the bhajana:]

Sri Jayadeva Gosvami's kirtana, Sri Mangala-Gitam, glorifies Bhagavan Sri Krsna, but moreover it indicates the glories of Srimati Radhika. This is because Lord Krsna's highest glories are not manifest without His being in Her association.

Regarding this verse Srila Prabodhananda Sarasvati prays, "When will I perform rasa-upasana of that very Srimati Radhika?" Rasa-upasana means rendering service to Sri Sri Radha-Krsna by following in the footsteps of Sri Rupa-manjari and Rati-manjari. In this verse, at the time of His leaving home to go cow-herding, Krsna sees Srimati Radhika from afar and He begins to faint. Madhumangala catches Him and says, "O my friend, what are You doing? Mother Yasoda and Nanda Baba can see You."

Dhrta-kundala are Sri Krsna's kundala (earrings) – the ornaments or beauty that decorate His ears are Srimati Radhika's very beautiful words. Hearing the sound of Her sweet voice, Krsna's flute falls to the ground.

Kalita-lalita-vanamala – Kalita-lalita means extremely attractive and beautiful. Krsna wears a very beautiful vanamala, garland of forest flowers. A question arises as to who made this garland, and the answer is that Srimati Radhika Herself has made it and placed it around His neck.

Sri Caitanya Mahaprabhu is always in Srimati Radhika's mood, but when He heard this song His mood at once changed to that of Sri Krsna. At that time He wanted to embrace the singer, thinking she may be Srimati Radhika or Srimati Lalita-devi or Visakha-devi. Therefore, when He was checked by His servant Govinda, He embraced Him and said, "I was about to return to My mood and nature as Krsna, but you checked Me. If you had not done so, I would have lost the purpose for which I came in this form, and also everyone would know that I am Krsna. You have saved Me."

This is the first meaning, and in the second Lord Caitanya is telling Govinda, "You saved Me. If you had not done so, if I had touched that woman, I would have then jumped in the river and drowned there." In this way there are two very good and deep meanings.

Many sannyasis, those in the renounced order, give up their sannyasa because they like to associate with ladies. They rationalize their activities by saying, "So many ladies come to me. What can I do? They come automatically, without my invitation."

Sri Caitanya Mahaprabhu will not listen to these arguments, so you should be very careful. If a lady comes to you with a spirit of enjoyment, slap her and speak harshly to her. I am very strict about this. Although I am very polite by nature, in these matters I am very strict. I cannot tolerate this. Girls should be especially careful regarding their motives for coming here. They sometimes come to pick up brahmacaris or sannyasis, and I have warned them not to come for this. They should only come to hear hari-katha, and they should be very strong in Krsna consciousness.

Bhava-khandana – Bhava means the coming and going in the endless cycle of birth and death and suffering in this material world. Khandana – for those in this world, Sri Krsna puts an end to all sorrows and sufferings in the cycle of birth and death. The gopis of Vrndavana, however, have a different kind of suffering. For them, suffering means separation from Sri Krsna. Srimati Radhika and the gopis feel great separation from Him, and He puts an end to that suffering. At the time of their separation He manifests to them in the form of a sphurti (vision), or in person, and relieves them from the fire of separation.

At the end of the kirtana Srila Jayadeva Gosvami prays – idam kurute mudam. Mudam means overjoyed. He prays, "May all the world become auspicious and overjoyed." He prays to Bhagavan Sri Krsna, on behalf of all the people in the world, to manifest within their hearts the transcendental pastimes described in this kirtana. He is very merciful, just as Srila Rupa Gosvami, who prayed:

["May the Supreme Lord who is known as the son of Srimati Saci-devi be transcendentally situated in the innermost chambers of your heart. Resplendent with the radiance of molten gold, He has appeared in the Age of Kali by His causeless mercy to bestow what no incarnation has ever offered before: the most sublime and radiant mellow of devotional service, the mellow of conjugal love."]

Srila Rupa Gosvami did not pray for himself; he prayed that Sriman Mahaprabhu will kindly manifest in the hearts of everyone. Vaisnavas are causelessly merciful; they pray to Krsna on behalf of all the jivas.

In conclusion Srila Jayadeva Gosvami is saying, mangalam-ujjvala-gitam, which means that this song is full of unnatojjvala-rasa, the transcendental parakiya-rasa of mahabhava-svarupini Srimati Radhika.

Srila Maharaja then requested the assembled devotees to chant Srila Jayadeva Gosvami's Sri Dasavatara-stotram. At the end of the kirtana, the kirtana leader chanted "Jaya dasavatara, jaya dasavatara" – all glories to the ten avataras (incarnations of Lord Krsna).

Srila Gurudeva: Don't sing this ending. This song is not the glorification of the ten avataras. Kesava! Dhrta-dasa-vidha-rupa! – This is a glorification of Kesava, Krsnacandra, Syamasundara and Vrajendranandana. You can sing instead, "Jaya dasavatari – all glories to that Krsna Bhagavan who is the origin of all these avataras."

The devotees then chanted the kirtanas Sri Nanda-Nandanastakam and Sri Radha-Krpa-Kataksa-Stava-Raja, as they do every year on this very day.

Srila Maharaja: When Srimati Radhika hears this Sri Nanda-Nandanastakam, She becomes overjoyed and wants to give a benediction. At that time She will bestow the lotus feet of Her Prana-vallabha (beloved of Her life's breath) Sri Krsna upon the devotees who bring Her so much happiness by singing this astakam. Alternately, if someone will sing Sri Radha-Krpa-Kataksa-Stava-Raja, which is the glorification of Srimati Radhika, Sri Krsna will become overjoyed and He will want to give the benediction of the lotus feet of His beloved Srimati Radhika.

Sri Nanda-Nandanastakam has originally emanated from the lotus mouth of Srimati Radhika, and she is singing it to Sri Krsna, either to His sphurti in separation, or directly to Him. Because His beauty is astonishing, She describes each and every one of His limbs. At the same time Sri Krsna thinks, "In this world no one has qualities as I possess. No one is as beautiful as I am and no one has attributes as I do. There is one person though – Srimati Radhika has hundreds of times the qualities that I possess. She is My prema-guru."

This is explained in Sri Caitanya-caritamrta, Adi-lila Chapter 4, wherein it is also stated that the gopis have all relationships with Krsna. They are His servants, masters, friends, mothers, and so on. Every relationship that is had by anyone with Krsna is had by the gopis with Him. We know that Mother Yasoda incessantly nourishes, cares for and protects Him but whatever moods manifest in Mother Yasoda are present still more so in the gopis.

["I offer pranama to Sri Nanda-nandana, whose face is extremely delightful, from whose beautiful ears hang jeweled earrings, and whose entire body is anointed with fragrant candana."]

Lord Krsna's face is very beautiful when He has darsana of Srimati Radhika at the time of rasa-lila. Srila Vyasadeva did not write rasa-lila in Srimad-Bhagavatam; rather it manifested spontaneously in his heart by sphurti, and then he spoke it. This sphurti takes place by the mercy of Krsna. Srimad-Bhagavatam is an eternal sastra like the Vedas, but it is many times superior. 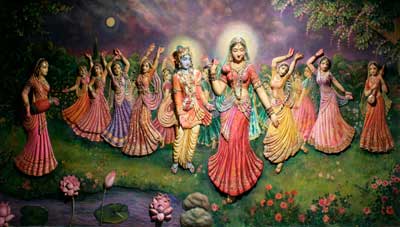 Why did Lord Krsna manifest His rasa-lila? Ordinary devotees cannot understand it, what to speak of those who are fallen and engaged in sinful activities. Srila Rupa Gosvami explained that Krsna is very merciful; if He had not brought rasa-lila from Goloka Vrndavana to this world, nobody would have the opportunity to understand it. By hearing about rasa-lila from pure devotees, one develops lobha (transcendental greed) to obtain that very confidential and difficult to obtain parakiya-rasa, unnatojjvala-bhava (paramour love for Krsna). Krsna performed rasa-lila to awaken greed in the hearts of those who are not qualified, to make them qualified to taste rasa. And, by the same exhibition of rasa-lila, He also increases these mellows tasted by those who are already tasting rasa. He is therefore very merciful, and Srimati Radhika is even more merciful than He.

["For the pleasure of Srimati Radhika, even Sri Krsna Himself, yearning to attain Her merciful sidelong glance, regularly bathes in Radha-kunda, carefully observing all the appropriate rituals. May that supremely enchanting Radha-kunda be my shelter."]

In this verse it is explained that Lord Krsna is merciful, but He Himself seeks the mercy of Srimati Radhika. He goes to Radha-kunda and, according to all rules and regulations, He takes bath three times a day and then worships Srimati Radhika and prays to Her, "Please give Me your krpa-kataksa, Your merciful side-long glance, because if You do mana and ignore Me for one more second I will not be able to maintain My life."

These moods have been manifested by Srila Raghunatha dasa Gosvami, Srila Rupa Gosvami, Srila Visvanatha Cakravarti Thakura and Srila Bhaktivinoda Thakura. Bhajana means to follow in their footsteps and to recite these kirtanas, developing their moods, so that a vision of the meaning of these kirtanas and transcendental pastimes will come into the heart.

Krsna has performed innumerable pastimes, but out of all pastimes rasa-lila is the best and most powerful. We have heard many times about the pastime of Mother Yasoda binding baby Krsna, and this pastime has astonishing power. Yet, rasa-lila is billions of times more powerful. Srila Sukadeva Gosvami therefore said,

["Anyone who faithfully hears and then describes the Lord's playful affairs with the young gopis of Vrndavana will attain the Lord's pure devotional service. Thus he will quickly become sober and conquer lust, the disease of the heart."]

One should hear the sweet pastimes performed by Lord Krsna when He sports with the damsels of Vraja. We should hear them with 'anusrnuyat.' Anu means under the guidance of a sat-guru – bona fide guru and Vaisnavas, and it also means continually hearing these pastimes and rendering service to guru, and afterwards describing them. What will be the result? Bhaktim param bhagavati pratilabhya kamam: here the word kama means prema-bhava; the love of the gopis will manifest in the heart, and as a result of this all lust will be eradicated forever. This is the wonderful power of hearing and describing rasa-lila. In their nara-lila, human-like pastimes, even Narada Muni and Lord Sankara were sometimes unable to check the power of lust, but this rasa-lila is called param-vijaya-lila – the lila which enables one to become completely victorious over lust. No one has the power to overcome lust, yet, our Gosvamis have manifested this lila and its deep bhavas, transcendental emotions, in their writings so that one will be able to overcome lust and enter into the lila. One should make the service of Sri Sri Radha-Krsna in this rasa-lila the ultimate and only aim and object of life.