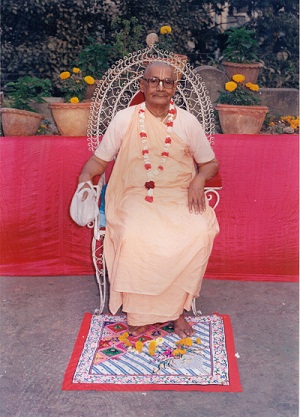 Sri Srimad Bhaktivedanta Narayana Gosvami Maharaja
A lecture given for his divine disappearance day
[On Nov. 18, 2004 Srila Gurudeva held a separation-festival in Srila Vamana Maharaja's honor, and the following is a transcription of his offering:]

On November 15, the same day that Srila Trivikrama Maharaja left the world two years earlier, Srila Bhaktivedanta Vamana Gosvami Maharaja left at midnight, during Sri Krsna’s nisa-lila (midnight pastime s). About 1,000 devotees from all over the world are here at Govardhana performing parikrama, but I left all my responsibilities here and went to Navadvipa. I did what needed to be done there and now I’ve returned. I know the devotees here observed Srila Vamana Maharaja’s disappearance ceremony, weeping, but now we are going to observe it again. Now, devotees should glorify him.

[Srila Maharaja then called on Srila Vamana Maharaja’s senior most disciple, Sripad Parivrajaka Maharaja, who spoke in Bengali, and then several others, to offer their heartfelt glorification. He then offered his own glorification:]

We have heard from many Vaisnavas, such as Sripad Parivrajaka Maharaja and Sripada Madhava Maharaja, and especially Sripad Bhakti-prasada Van Maharaja spoke very nicely about the principle of separation (viraha-tattva). Separation feelings are very important in the bhajana of Gaudiya Vaisnavas. When first entering the realm of bhajana there are feelings of separation, in the middle there are such feelings, and when one attains Sri Sri Radha-Krsna’s direct service, there are also such feelings. Separation is one of the aspects of prema (pure love of God). When there is separation there must also be meeting, and that is why Vaisnava literature gives it great importance. The experience of meeting is more important than the feeling of being separated.

During that time of separation we can remember all the qualities of our object of love and worship, whereas this is not possible at the time of meeting. In viraha there is meeting internally – you can meet directly there. Vaisnavas never die; rather, they enter into the transcendental world and disappear from here. They are just like Krsna. His pastimes appear and then disappear. Similarly, Vaisnavas also appear and disappear.

Pujyapada Srila Vamana Maharaja grew up in Vaisnava association. His mother was a disciple of Srila Bhaktisiddhanta Sarasvati Thakura. She was very intelligent and had so much guru-nistha; she had great faith in her guru. Srila Vamana Maharaja’s uncle’s name was Bhakti Bhusana Nrsimha Maharaja.

Srila Vamana Maharaja was an exalted servant of my Gurudeva, Srila Bhakti-prajnana Kesava Gosvami Maharaja, and from his childhood he served in a great variety of ways. When he was 10 ½ years old his mother offered him to my Gurudeva, and from that time on he considered Gurudeva his all-in-all – his mother, father, siksa-guru and everything else of value.

He had joined the matha during the time of Srila Prabhupada Bhaktisiddhanta Sarasvati Thakura and took harinama initiation from him, but he always considered my Gurudeva his guru. This is because he was always nurtured and given shelter by him.

Srila Vamana Maharaja was called Sajjana-sevaka brahmacari before taking sannyasa. He had such a strong memory that whatever he read he would remember immediately. Guru Maharaja told him, “If you learn one verse, I will give you a toffee.” Not only did he learn one verse, but in one day he would learn many verses. In his childhood, when he was still studying in school, he would remember the entire Bhagavad-gita, Gaudiya-kantahara and so many books. He would see them once – and then remember them.

He was admitted in Bhaktivinoda Institute, and there he came first in his class. Then, after school he would go to the matha and render profuse service. At the time of honoring prasada (prasada-seva) he would personally serve the leaf plates, salt, lemon, water and mats to sit on. After prasada he would personally pick up all the leaf plates and throw them away, and he would also clean the area where the devotees had honored prasadam. Later, at night, he would clean the toilets and do other menial work; and he did all this under the guidance of Guru Maharaja.

Srila Vamana Maharaja passed many difficult examinations, and here is one example: After the departure of Srila Bhaktisiddhanta Sarasvati Thakura Prabhupada, someone falsely blamed the Gaudiya Matha devotees on a charge of murder. About 45 devotees were thus sent to jail, including my Gurudeva, Narahari prabhu and Krsnadasa babaji Maharaja. Alone, Srila Vamana Maharaja would go shopping in the market, prepare meals for them and take those meals to them in jail, go to court, and call the lawyers. This was very difficult, because he was all alone. He was being criticized that although he didn’t have the diksa-mantras, he was cooking and offering the bhoga to the Deities. He therefore received diksa-mantras from Guru Maharaja in the prison, because he had to cook the offerings.

Headed by Guru Maharaja, many disciples of Srila Prabhupada in Navadvipa established the Sri Gaudiya Vedanta Samiti – first in Navadvipa and then in Calcutta. Parama-pujyapada Srila Bhaktivedanta Svami Maharaja’s name was Abhaya Carana De in that time, and he was also present. He and Guru Maharaja started this together, along with Sripad Nrsimha brahmacari.

Once, over 150 devotees came to the temple – and there was nobody to cook. Srila Vamana Maharaja was very expert in making vegetables and all sorts of dishes. Though he was sick and had a temperature of 104, Guru Maharaja told him, “Get up and serve the Vaisnavas. You can fall sick afterwards. There is no time to fall sick now.” In that condition he got up and prepared all the prasadam, served all the devotees, cleaned everything that needed cleaning, and then again fell sick.

He was in charge of the printing press. Once, his fingers were crushed in the press and began profusely bleeding. Guru Maharaja started to cry and immediately took him personally to the hospital in Calcutta. When Guru Maharaji would preach in Calcutta, he would leave all arrangements to Srila Vamana Maharaja. Srila Vamana Maharaja would do all correspondence, even in English.

One night I left my household life and arrived at the train station, also during the night. When I got off the train it was completely dark. I had never told anybody I was coming to the station. I saw Sajjana-sevaka brahmacari with another devotee, holding a lantern and searching for me. He came to me and said, “Are you Tiwariji?” I replied, “Yes. How did you know I was coming? I did not write.” Srila Vamana Maharaja replied, “I was sent by my Guru Maharaja.”

Whatever was happening at the matha or with the institution, Srila Vamana Maharaja acted as though he did not know all the details. He would say to the devotees, “Go and ask Srila Narayana Maharaja.” He used to have so much trust in me.

Regarding his expertise in writing, he would not commit any mistakes while writing, so there was no need to edit or correct his work. Whatever he would write was like perfect, golden words. Guru Maharja would say, “You can take it and get it printed.” As he wrote beautifully, he also spoke beautifully. He sometimes gave lectures for three hours, and he would speak very softly. If he would be defeating somebody’s argument, he would do so in sweet words. In fact, only that person whose misconception was being defeated would understand what was going on.

He was the “right hand” of Srila Gurudeva. We three – Pujyapada Srila Vamana Maharaja, Pujyapada Srila Trivikrama Maharaja and myself were the leaders from the beginning. Whatever we had to do, the three of us would do together. For 65 years – while Gurudeva was present and also after his disappearance – Gaudiya Vedanta Samiti was running smoothly. Srila Trivikrama Maharaja was the first pillar who left. Then Srila Vamana Maharaja became sick. If he would have remained healthy, nobody would have dared to break-up the Gaudiya Vedanta Samiti, but it happened like this.

I have just gone to Navadvipa, at the time of his disappearance. They had called and told me that Srila Vamana Maharaja wanted me to give him samadhi. They requested me with great appeal, “Please come, please come. When you arrive you will give him samadhi.” I left all of you – one thousand devotees. Though not feeling very well, I went there; but I did not have to do anything. During the night the leaders there arranged everything. I do not know what was on their minds. They are young boys, without proper brains and still with their baby teeth. I don’t know what politics they are doing at present. They played politics with Srila Vamana Maharaja also, and they thought that whatever they did was for Gurudeva.

So I did not give Srila Vamana Maharaja Samadhi, but I performed whatever other functions were required by me. I offered puspanjali, arati, and parikrama of his samadhi. Thousands of people in Navadvipa – his disciples and other people of Navadvipa – were crying loudly and bitterly. They were begging me, “Don’t go. Gurudeva has left us. Please, don’t you leave us.” I replied, “I can never leave you; but I am insulted here, so I cannot remain here. Wherever I will live, my door is always open. Let there be mutual understanding. Whatever has happened has happened. If they call me I will come.

Somehow I pacified them. A few foolish “young boys” in the Matha, whom I personally took care of for many years, have created this situation. These guru-drohis are running this matha. And after a few days they will destroy themselves and this matha.

They have no faith in Guru and they are committing offenses to Vaisnavas. What good can come out of this? Srila Vamana Maharajaji has not taught them to act like this. I heard that he was not even speaking in his last days. I have never heard him say anything bad about anybody.

We will consider Srila Vamana Maharaja’s instructions only. We will serve him. In Navadvipa, so many of my god-brothers have left and they want to come to us. They tell us, “We will come and stay with you.” So many of the boys left that place in Navadvipa; I only saw a few remaining. Wherever one receives love and affection, that is where one will be attracted.

Let us save ourselves from criticizing others. We will serve Srila Vamana Maharaja wherever he is. May he be merciful to us. With this prayer I offer my puspanjali at his lotus feet.