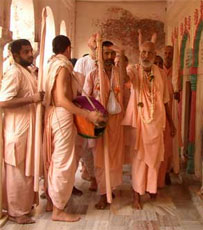 [For almost a week in September 2004, Srila Bhaktivedanta Narayana Gosvami Maharaja was giving nightly classes on Bhakti-rasayana, which is the last part of Srila Sanatana Gosvami’s Brhat-bhagavatamrta. On September 25th , Srila Jiva Gosvami's Appearance Day, Srila Maharaja continued his class series, but he also took a few minutes to glorify Srila Jiva Gosvami. The following is a transcription of his brief talk:]

Srila Jiva Gosvami preached all the teachings of Rupa Gosvami. He supported and explained them with philosophical evidence. When he wrote Gopal-campu, he also explained all the pastimes of Sri Krsna from the point of view of philosophy.

It seems that Srila Jiva Gosvami supported svakiya-vada, which is the conception that Srimati Radhika and Sri Krsna are married, and that Srila Visvanatha Cakravarti Thakura supported parakiya-vada (The Divine Couple’s paramour love). Srila Bhaktivinoda Thakura has reconciled the explanations of both. He called his reconciliation vicara-vaisistya, explaining that there is a specialty in their viewpoints, but there is actually no difference in their philosophy or conclusions.

Srila Visvanatha Cakravarti Thakura is not less than Srila Jiva Gosvami. He composed so many Vedic literatures. He wrote commentaries on Bhakti-rasamrta-sindhu, Laghu-bhagavatamrta and Ujjvala-nilamani of Srila Rupa Gosvami in his own three books, called Bindu, Kirana and Kana. He also wrote Madhurya Kadambini, which is a commentary on the verse from Bhakti-rasamrta-sindhu:

["In the beginning one must have a preliminary desire for self-realization. This will bring one to the stage of trying to associate with persons who are spiritually elevated. In the next stage one becomes initiated bya self-realizedspiritual master, and under his instruction the neophyte devotee begins the process of devotional service. By execution of devotional service under the guidance of the spiritual master, one becomes free from all material attachment, attains steadiness in self-realization, and acquires a taste for hearing about theSupreme Personality of Godhead, Sri Krsna. This taste leads one further forward to attachment for Krsna consciousness, which is matured in bhava, or the preliminary stage of transcendental love of God. Real love for God is called prema, the highest perfectional stage of life." (Bhakti-rasamrta-sindhu 1.4.15-16)]

Also, in his book Raga-vartma-candrika, Srila Visvanatha Cakravarti Thakura explained three verses dealing with raganuga-bhakti from Bhakti-rasamrta-sindhu. He wrote commentaries on Bhakti-rasamrta-sindhu and Ujjvala-nilamani, called Ananda-cankrika tika, and he wrote a commentary on the Tenth Canto of Srimad-Bhagavatam called Sarartha Darsini. He wrote very brilliantly.

Srila Jiva Gosvamipada himself wrote many commentaries on Srimad Bhagavatam, including Sat (Six) Sandarbhas, and also a commentary on Ujjvala-nilamani and Bhakti-rasamrta-sindhu. Today, on his Appearance Day, we pray to him and remember his lotus feet – especially because he is an eternal associate of Sri Caitanya Mahaprabhu and he is the eternal associate of Sri Sri Radha-Krsna in his form as Sri Vilasa Manjari.