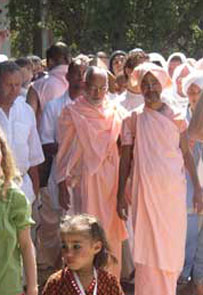 Today is the third day of our classes, and we have thus far discussed so many topics from Sri Srimad-Bhagavatam. In continuation:

["By regular attendance in classes on the Bhagavatam and by rendering of service to the pure devotee, all that is troublesome to the heart is almost completely destroyed, and loving service unto the Personality of Godhead, who is praised with transcendental songs, is established as an irrevocable fact." (Srimad-Bhagavatam 1.2.18)]

The above-mentioned verse discusses the bhagavata. Bhagavatas are of two kinds - grantha (scripture) bhagavata and bhakti-rasapatra bhagavata, those who are containers of the sublime mellow of pure devotion; those who are sinking in love and affection for Krsna; those who are rasika. Though Srimad-Bhagavatam is present, if Srila Sukadeva Gosvami or Sri Narada Gosvami were not also present, how would it be possible for anyone to open the treasure box of Srimad-Bhagavatam? In modern times, it was my siksa-guru Srila Bhaktivedanta Svami Prabhupada who unlocked this treasure for the entire world. By his order I am doing something, but the key is in his hands and my Gurudeva's hands. They ordered me to take the key and distribute that treasure. So, bhagavat seva is essential, but the key to the book bhagavata is in the hands of rasika-vaisnava bhagavatas - mahat-sanga.

There are two kinds of guru; diksa-guru and siksa-guru. Sri Syamananda prabhu, Srila Narottama dasa Thakura and Srinivasa Acarya had their own diksa-gurus, but they all took shelter of Srila Jiva Gosvami as their siksa-guru. Srila Raghunatha dasa Gosvami's diksa guru was Yadunandana Acarya, in the line of Sri Advaita Acarya, but he took shelter of Sri Caitanya Mahaprabhu. Caitanya Mahaprabhu told him, "I cannot help you sufficiently. You should go to Svarupa Damodara." Why was this? Srila Raghunatha dasa Gosvami had a mood of awe and reverence for Sri Caitanya Mahaprabhu and some fear, because although he wasn't officially initiated by the Lord, he showed him that type of honor. But siksa-guru is like a bosom friend. With diksa-guru we cannot open our heart fully, because of that mood of awe and reverence, aisvarya-bhava, thinking him an exalted superior. But the siksa-guru is our "heartly" bosom friend. We can open our hearts to him. Srila Raghunatha dasa Gosvami used to open his heart to Srila Svarupa Damodara, but he feared asking anything to Sri Caitanya Mahaprabhu.

Mahat-sanga is very high and deep, as you can understand by our classes. Its glory is clarified by our explanations. Parama-pujyapada Srila Bhaktivedanta Svami Maharaja went alone, by Scindia Navigation to New York Tompkins Square Park. There, and closing his eyes, tears in his eyes, heart melting, he would sing: "Sri Krsna Caitanya Prabhu Nityananda Sri Advaita Gadadhara Srivasadi Gaura-bhakta-vrnda." Happy to hear his song, all hippies present would dance. They would offer him wine and cigarettes, and so many other things that they loved at the time. And what happened? He was mahat. By a few moments with that mahat-sanga those hippies became happy.

When Prabhupada was present, he attracted people like a magnet. Then he appeared to have departed, and many of his senior disciples thought, "Prabhupada has gone." They became confused, and that is why their minds went elsewhere. If they were with me, it is guaranteed that they would have never fallen. Never. Because of this fact, Srila Svami Maharaja told me, "You should help my devotees."

Therefore, to obey my diksa-guru, siksa-guru, guru-parampara and Sri Caitanya Mahaprabhu, in this old age of almost 85 I am traveling and preaching around the world. I think that when I was in the hospital you prayed to Krsna, "Give our lives to him," and that is why He has given me more years. I think that in these next five or six years I will complete Sri Brhad-bhagavatamrta, Sri Bhakti-rasamrta-sindhu, Sri Ujjvala-nilamani and also Srimad-Bhagavatam. If He will give me the energy, I will complete Srila Visvanatha Cakravarti Thakura's commentary on Srimad-Bhagavatam. Srila Svami Maharaja kept some remnants for me and ordered me, "You should do it now."

You must realize mahat-sanga. Even a moment with a mahat can change your lives.

["The glory of mahat-sanga is super-astounding. By the influence of that glory, Jana Sarma's life immediately became successful, like that of his Guru, Svarupa. He became a personal friend of Sri Krsna by the association of Svarupa, who was known as Gopa Kumara in this world. That he immediately attained bhagavat-prema demonstrated the immense value of association with a great personality. Just like Svarupa, within an instance that brahmana felt fully gratified." (Brhad-Bhagavatamrta, 2.7.14)

Regarding the above-mentioned verse, I told the history yesterday; perhaps you remember. There were two persons - disciple and guru. The disciple, Jana Sarma, had been born in a brahmana family in Mathura, and he had many material desires. He went to Jyotispura in Assam, where, in his dream, the power of Sankara, the very exalted devotee named Kamakya devi, gave him the gopala-mantra. She only gave him some short instructions about how to chant the mantra - not lengthy as I am giving. When he woke up he began to chant the gopala-mantra, and a miracle occurred. After a couple of days of chanting this mantra, all his desires for wealth and position disappeared. He then traveled to the Bay of Bengal, to Kapiladeva's asrama. He took bath there, and then he went to Gaya and then Kasi, Varanasi, the place of Mayavadis. There, in a dream, Sankara and Parvati told him, "At once go away from here Don't remain here, otherwise the Mayavadi philosophy will attack you." He quickly went to Prayag, from there to Mathura, and then to Vrndavana.

There in Vrndavana he met his Guru, Gopa-kumara, and thus he came to know all the siddhanta we discussed in our previous class on advaya-jnana-tattva. He understood the words very clearly, but he had no realization of those topics. Gopa-kumara also told him his own life history, and he taught him about all the rasas. Jana Sarma understood the words, but there were no tears and no melting heart.

Then, Gurudeva became very merciful - because he was mahat, sent by Srimati Radhika Herself. He was Her most near and dear Svarupa (Gopa-Kumara's name in his perfected spiritual form as a cowherd friend of Sri Krsna). So who would be more mahat than him? It was by Her order that he was telling all the truths about siddhanta and rasa to Jana Sarma. He saw no tears and no melting heart, so at once he touched Jana Sarma's head and everything he had spoken entered his heart.

"Ohhh" He immediately began to weep loudly, and his heart began to melt. He closed his eyes, and when he again opened them he saw that he was in Goloka Vrndavana with Lord Krsna. Sri Krsna had gone cow-herding and so many sakhas were there with Him, like Madhumangala, Sridama, Subala, Dama, Vasudama, Stoka-krsna, Lavanga, Arjuna, Kokila, Bringa and Vasanta. Krsna was with Baladeva Prabhu, and as soon as He saw Jana Sarma he said, "This new one, for whom I was weeping bitterly for a long time, has now come to Me." He embraced Jana Sarma and they both fainted. This is mahat-sanga.

You are very lucky that you have been in the association of Srila Bhaktivedanta Svami Maharaja - your Prabhupada. I think most devotees here are his disciples. He has sent you to help me.

That Mathura brahmana became just like his Gurudeva, and from then on Krsna kept him with Him - as He kept Madhumangala with Him.

This year, Sri Guru Purnima was observed in Ananda Dhama, situated right at the parikrama road in Vrindavana. Sri Ananda Kela prabhu organized everything in a fantastic manner so as to properly facilitate Srila Gurudeva and the thousands of followers who came and offered their heart felt puspanjali on the occasion of Sri Guru Purnima. Due to the facilities there, even more visitors attended this most auspicious festival than in previous years.

The previous day, July 1, Srila Gurudeva spoke briefly about the importance of the real relationship between Sri Guru and his disciples. It is not that once a year we come and pay our respects and receive a kanti-mala form our Gurudeva. Throughout the year the real disciple tries to be with his Gurudeva, hearing from him and serving the manobhista of Gurudeva. What is the manobhista of Gurudeva? It is the very same as the manobhista of Srila Rupa Gosvami, who knew and realized the innermost heart's desire of Sri Caitanya Mahaprabhu. Sri caitanya mano bhistam, stapitam yena bhutale.