Don't Have Any Doubt 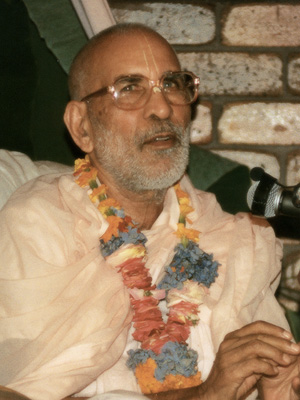 Once, a brahmana went to the house of Sacimaiya in Navadvipa, Mayapura. Sacimaiya told him, "In my house there is a Visnu salagrama Deity. Would you like to take prasadam here? I have offered sweet prasadam to my Thakurji - sweet rice and many other preparations. Do you want to honor the prasadam? Or, do you want to cook yourself?" (Many brahmanas in India prefer to cook themselves, for their Deities.) I will give you all the ingredients, like milk, rice, dahl, ghee, and flour. I will give you a stove and all other paraphernalia." The brahmana replied, "I'll cook myself and offer the bhoga to my Gopala Deity." Sacimaiya then gave him all the paraphernalia.

Why do we become weak? The process of bhakti is complete, but we cannot follow it due to our anarthas (obstacles in the execution of bhakti created by our own past sins and offences). Srila Haridasa Thakura chanted three hundred thousand names, or 128 rounds, of harinama daily. So at least we should be able to chant 64 rounds daily. Can you do that? You may be able to do so for one or two days, or on the birthday of Lord Krsna or Lord Nrsimhadeva. However, if you try to do so daily, after two or three days you will get sick and become mad. You cannot do so. The ability to do so is also the mercy of Krsna. If Krsna is happy, then by His causeless mercy He will take away all your anarthas and give you ruci (taste) at once - taste in chanting the holy name, taste in Vaisnava-seva, taste in hearing, taste in worshipping, taste in cooking and all other devotional activities will come. This is also the mercy of Krsna.

One may pose the question: "How did that Mathura brahmana at once go to Goloka Vrndavana and become the friend of Krsna without following a process?" One may say, "This idea is absurd - that one can attain Goloka without following the prescribed process. This phenomenon has never been seen in this world." Srila Santana Gosvami has written to reply this doubt:

"The glory of mahat-sanga is super-astounding. By the influence of that glory, Jana Sarma's life immediately became successful, like that of his Guru, Svarupa. He became a personal friend of Sri Krsna by the association of Svarupa, who was known as Gopa Kumara in this world. That he immediately attained bhagavat-prema demonstrated the immense value of association with a great personality. Just like Svarupa, within an instance that brahmana felt fully gratified." (Brhad-Bhagavatamrta, 2.7.14)

Don't have any doubts in your Guru's teachings. If you are not realizing those teachings now, one day you will be able to realize them. Guru is mahat. To be Guru one must be mahat - not less than mahat. There are so many degrees of mahat. If uttama-adhikaris like Sri Narada Rsi and Srila Sukadeva Gosvami simply touch their follower, that follower will at once attain bhakti. There will be no need to go through any process.

What and who is uttama-uttama, uttama-madhyama, and uttama-kanistha? You should understand the meaning of mahat. [*See Endnote 1]

You should hear this kathamrta, nectar of hari-katha. Srila Santana Gosvami is telling us here, not to doubt Guru's words. If Guru is authentic, a mahat, you can inquire from him:

["Just try to learn the truth by approaching a spiritual master. Inquire from him submissively and render service unto him. The self-realized souls can impart knowledge unto you because they have seen the truth." (Bhagavad-gita 4.34)]

Self realized souls are tattva-darsi. They will reveal all truths to you, if you are surrendered. Don't have any doubt - otherwise you will be separated from the revelation of the spiritual world for births and births. Srila Santana Gosvami is urging us, "Don't have any doubts." This brahmana became of the same standard as his spiritual master, who in that realm of Goloka Vrndavana is Svarupa, an intimate cowherd friend of Sri Krsna.

There is a hidden meaning here. Svarupa was a transcendental associate of Lord Krsna and Srimati Radhika. He was not a jiva. He was like Narada, Mother Yasoda, Subala, Sridama and Madhumangala. They were not conditioned souls at any time. They never had to practice bhakti-yoga in order to become those associates. This would be absurd for them. Like them, Svarupa is an eternal, transcendental associate of Krsna and Radhika and is very near and dear to them. On the other hand, that brahmana was a conditioned soul. It was to reveal this miracle - how a conditioned soul became immediately perfect - that Srila Sanatana Gosvami wrote this verse Jana Sarma was not an associate of Krsna - who will not have to do sadhana. This brahmana was a conditioned soul who had not performed any of the nine processes of devotion:

["Prahlada Maharaja said: Hearing and chanting about the transcendental holy name, form, qualities, paraphernalia and pastimes of Lord Visnu, remembering them, serving the lotus feet of the Lord, offering the Lord respectful worship with sixteen types of paraphernalia, offering prayers to the Lord, becoming His servant, considering the Lord one's best friend, and surrendering everything unto Him (in other words, serving Him with the body, mind and words)-these nine processes are accepted as pure devotional service. One who has dedicated his life to the service of Krsna through these nine methods should be understood to be the most learned person, for he has acquired complete knowledge." (Srimad-Bhagavatam 7.5.24)]

Nor had he performed the five:

["One should associate with devotees, chant the holy name of the Lord, hear Srimad-Bhagavatam, reside at Mathura and worship the Deity with faith and veneration." (Caitanya Caritamrta Madhya 2.128)]

Nor the one most important limb of bhakti:

He was only chanting the gopala-mantra as given by Lord Siva's consort Kamakhya devi, and he was doing so without having received much guidance from her about how to chant it. Yet, his Gurudeva told him, "You shall now become a realized soul." And he became so.

Don't have any doubt in Sri Gurudeva - but that Guru must be qualified. If you have any doubt, you can ask your Gurudeva, "How is it possible that, without any sadhana-bhajana, a conditioned soul attained perfection, at once went to Goloka Vrndavana, and became a friend of Krsna, like Sudama and Madhumangala? How is it possible?

Srila Santana Gosvami wrote this verse in order to assure you, "Don't be hopeless. Have hope"

You can attain the advanced stage of bhakti by practice - or in other words, Gurudeva will give you mercy. He will give you taste in this practice. First naistiki-bhakti (steadiness) comes, then taste, then asakti (attachment to both bhajana and the object of bhajana) and then suddha-sattva (bhava-bhakti) will come. This is also the mercy of Gurudeva. Don't be hopeless and don't have any doubt; otherwise, this doubt will make you suffer for thousands of births and you will be ruined.

Mahat-sangama - the glory of mahat-sanga is paramadbhuta, supremely astounding. It is beyond logic. Logic cannot reach it. The effects of mahat-sanga are beyond logic. Everything can be accomplished by it. We cannot imagine the results of even one moment with a mahat. There is a river here in Badger. If you have doubts, go to that river and throw all your doubts in that river forever.

In the third Canto Srimad-Bhagavatam, Devahuti has said that if anyone unknowingly engages in an activity or exchange with a mahat-purusa, takes prasadam together with him, talks together - even about worldly things, no harm - what will happen? His life will be changed by that - unknowingly Moreover, if you are doing these activities knowingly, the glory of that cannot be expressed.

I am finishing here, and tomorrow we will begin from this point. If you have any questions, we will have an istagosthi and try to remove all doubts.

Govardhana is here, and we will perform his worship. Yamuna, Kalindi, is also here, and Radha-kunda and Syama-kunda are also here. I call this place New Vraja.

Govardhana Annakuta will be performed here on the day after tomorrow, and those who participate will never have to beg. The Goddess of fortune, Laksmi, may have to beg, but that pure devotee will not have to do so. Somehow donate money, grains, flowers or anything favorable, to help in the festival. We will make the area of the festival as beautiful as it is in Govardhana Giriraja in Vrndavana.

(1) Bhagavat-parsada-deha-prapta After giving up the gross material body, those who have perfected themselves through the practice of bhakti obtain sac-cid-ananda spiritual forms, which are just suitable for the service of the Lord as associates (parsadas). Such persons are the best of all uttama-bhagavatas.

(2) Nirdhuta-kasaya
Those who, although still residing within the gross material body made of five elements, have no trace of material desire (vasana) nor any material impressions (samskaras) within their hearts are called nirdhuta-kasaya (those who have thrown off all material impurities). They belong to the intermediate class of uttama-bhagavatas.

(3) Murcchita-kasaya
Those siddha-mahapurusas pursuing the path of bhakti in whose hearts there remains a trace of desire (vasana) and impressions (samskaras) based on the material mode of goodness are known as murcchita-kasaya. Due to influence of their bhakti-yoga, these desires and impressions remain in a dormant or unconscious state. As soon as there is a favourable opportunity, their worshipful object, Sri Bhagavan, somehow causes their desire to be consumed and attracts them to His lotus feet. Such elevated souls belong to the preliminary stage (kanistha) of uttama-bhagavatas.

The association and mercy of these three kinds of maha-bhagavatas is the
cause of the manifestation of sraddha. (Sri Bhakti-rasamrta-sindhu)]