A Darsana on Responsibility 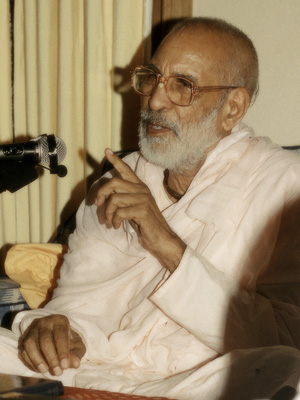 [At 7.00pm on June 27th, Srila Narayana Maharaja gave his farewell address to the over 700 devotees present. He said he would be leaving Italy in just a few hours, and he expressed his satisfaction that this, the largest European festival to date, was a grand success in all ways. On the previous days, just before his evening classes, he held darsanas (informal meetings) for devotees from a few countries each day. On June 22nd the darsana consisted mostly of devotees from England, America and Australia, and the following is a transcription of that darsana:]

[Anandini dasi:]] My situation is changing, because my children are now grown up. You said three years ago that the responsibilities would be completed in three years. Now three years are over. I need to surrender to you.

[Srila Narayana Maharaja:] Your children are still dependent on you. I think you have already surrendered totally to me.

[Brajanatha dasa:] One of the devotees told me he wanted to come, but he has so many other obligations.

[Srila Narayana Maharaja:] Sri Caitanya Mahaprabhu and Srila Raghunatha dasa Gosvami were married with very beautiful wives, but they had no obligations. They considered that they had no obligation other than to do bhajana. Srimati Gangamata Thakurani was about to get married, that is, her father had arranged her marriage, but she kicked out all her obligations and responsibilities and simply chanted, "Krsna, Krsna." I also had so many obligations - to my mother, father, newly married wife and children. But I became maddened with a desire to serve our Gurudeva, and forgot that there were any responsibilities in this world. I left home on the day of Amavasya at midnight. One should realize his transcendental relation and responsibilities toward Guru and Krsna. If, by sadhu-sanga, that responsibility will be remembered and realized, then all worldly responsibility disappears. Srimad Bhagavatam states that if one understands his responsibility to serve Lord Krsna, all other responsibilities will be automatically taken care of.

O King, one who has given up all material duties and has taken full shelter of the lotus feet of Mukunda, who offers shelter to all, is not indebted to the demigods, great sages, ordinary living beings, relatives, friends, mankind or even one's forefathers who have passed away. Since all such classes of living entities are part and parcel of the Supreme Lord, one who has surrendered to the Lord's service has no need to serve such persons separately. (Srimad Bhagavatam 11.5.41)]

If you can forget all worldly responsibilities, I will be very, very happy.

This is the difference between Maharaja Dasaratha and Maharaja Vasudeva. Maharaja Dasaratha could not reject his promise to send Lord Rama to the forest to be exiled for fourteen years. When he was approached by Rama he was silent, and that meant, "I will not directly tell you to go, but you should fulfill my obligation. You should go to the forest and stay there for fourteen years."

The situation with Lord Krsna was different. He told Vasudeva Maharaja, "You should take Me at once to Gokula, to Nanda Bhavan (the home of Nanda Maharaja). Leave Me there, take Yasoda's baby girl, and tell Kamsa, 'We have begotten a daughter.'" Vasudeva Maharaja had never told a lie in his life, but when ordered by Krsna, he told Kamsa, "We have begotten this daughter, not a son. Our eighth child is a daughter." For Krsna, we can do everything. We cannot lie for ourselves, but we may do so for Krsna. If you do not receive a direct order from Krsna, then don't ever tell a lie We may cheat others only when it is actually for Krsna.

[Srila Narayana Maharaja:] Because Srila Raghunatha dasa Gosvami was playing the role of a devotee who is not mature in his bhakti. When one is mature in his devotion he can leave, otherwise not. Many ISKCON leaders left home and tried to be renounced when still immature; and now, even twenty five or thirty years later, they are marrying. This is true even for sannyasis. So if one is immature he may become weak and give up his renunciation. Sri Caitanya Mahaprabhu told Raghunatha dasa Gosvami, "Go home and mature there" After four or five years Srila Dasa Gosvami returned to Lord Caitanya who then said, "You have come from the ditch of stool. I never actually wanted you to be there. I told you to stay only for some time.

[Devotee 1:] If we give up all our responsibilities now, when we are immature

[Srila Narayana Maharaja:] Not artificially, my dear daughter. First you must be happy in your devotional services and your chanting. Then, being happy, when you are smiling from the core of your heart, all material responsibility will be gone and they will never return.

[Pradyumna Misra dasa:] Now in Birmingham we are studying the Bhagavad-gita, and one question keeps coming to my mind. I have heard that when Krsna is speaking Bhagavad-gita to Arjuna, especially in the tenth chapter, it seems as if He is remembering Vrndavana. Does He always think of the Vrajavasis, even when He is in Kuruksetra?

[Devotee 2:] I don't have so many responsibilities, but I am really struggling to do my sadhana-bhajana.

[Srila Narayana Maharaja:] You can take diksa, but you will have to shave. Not only your hair, but your worldly desires also.

[Devotee 4:] You have always told me to be under guidance of older devotees when working on publishing your books. But I am now confused about whose guidance I should be under. Everyone I show an unpublished book to, they all say something different.

[Srila Narayana Maharaja:] Offering alone will not do. Something more is needed.

[Devotee 4:] Can I offer the books to you directly?

[Srila Narayana Maharaja:] Gurudeva tells you, "Come on this path," but you are going by another path. Externally, by mouth, you say, "I am always under your guidance." This alone will not do.