A New Temple in Navadvipa - Italy 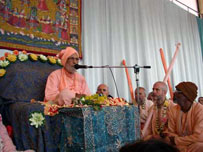 [The largest of Srila Narayana Maharaja's European hari-katha festivals was held in Italy last week, with over 700 devotees and guests in attendance. The main theme of his lectures was the glory of mahat-sanga, or sadhu-sanga (association with self-realized souls), in continuation of the series of classes he gave on the same subject in Badger three weeks earlier. Because this was also the week of the Ratha-yatra festival in India, he also spoke on that topic for two days. At the beginning of his June 23 class, he made the following announcement to the assembled devotees:]

Very soon, before Navadvipa parikrama takes place, we are going to establish a preaching center there in Sri Navadvipa-dhama. We will perform Navadvipa-dhama parikrama from there. We will try get at least ten acres of land, where we will build a temple with a goshala, kirtana hall, printing house, publishing department, guesthouse and brahmacari ashram. These will gradually be developed, just as in our Gaudiya Vedanta Samiti Devananda Gaudiya Matha.

I will soon be 85 years old. I have managed the Gaudiya Vedanta Samiti for about 50 or 60 years. Now, in my advanced age, I can no longer carry that burden. There is not so much time. I want to write and publish many books, as did Srila Bhaktivedanta Svami Maharaja, because my Gurudeva ordered me to do this. I also want to travel throughout the world, to support and nourish devotees everywhere.

And, I have decided to make this temple, especially for the international assembly of devotees.

But that new temple wants so much money. All of you can personally give at least a small donation. We are here in Italy for 7 days. If 500 persons donate something, we can purchase that land. We can very quickly build a fence, and then the buildings and so on. All will be done by the time of parikrama. Somehow I have promised - I have taken a vow - that we must do parikrama from that place this coming year. I request you all to help. Sannyasis should inspire others to join in this big service of Sri Caitanya Mahaprabhu and Sri Nityananda prabhu. I think you are happy to hear this, so try to help me in this service.