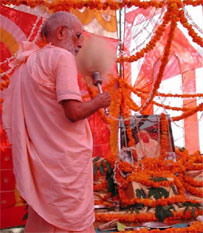 After speaking about Rupa Gosvami’s contribution, and performing his worship, and after offering obeisances to Sri Radha-Damodara and the other Deities on the grand altar, Srila Maharaja entered Srila Bhaktivedanta Svami Prabhupada’s bhajana-kutira. This was where Srila Prabhupada had spent much of his time before coming to America in 1966, and it was here that he completed his First Canto Srimad Bhagavatam and had it printed, to take with him to begin his mission in the West.

Here is the place of Srila Bhaktivedanta Swami Maharaja, just off the courtyard of Sri Sri Radha-Damodara. Srila Svami Maharaja took sannyasa in Mathura, and then he moved near to here and would sometimes go to Delhi. At last he came to this place – the place of Srila Rupa Gosvami’s samadhi and bhajana kutira. Here, he used to write books.

I would often come here from Mathura to be with him. He was penniless. He did not have any provision for his material comfort. I would give my chaddar to him and, sitting there, we would discuss many things. While preparing prasadam, we’d make the chapattis together – he would roll them, I would put them on the fire, and then he would put on the ghee. I would then offer the bhoga to Radha-Damodara. We used to sit and take prasadam right here.

By the grace of Srila Rupa Gosvami, his Gurudeva Srila Bhaktisiddhanta Sarasvati Thakura, and also Sri Sri Radha-Damodara, he went to the Western countries. In no time – in a couple of years – he established preaching centers and beautiful temples over the whole world. By his mercy Lord Jagannatha Deva appeared and Ratha-yatra was established in most major cities. Most importantly, he wrote and translated so many books – more than one hundred – and they were translated in most languages of the world.

So many ladies, even though in their youth, very beautiful teenagers, would distribute his books everywhere, all in a couple of years.

He accomplished a miracle in his last ten years. In the midst of oceans, in forests and cities, on the tops of mountains and almost everywhere else, his glory is manifest. But I think his real glory is that he has established the same mission that Srila Rupa Gosvami established, which came from the very heart of Sri Caitanya Mahaprabhu. Everything he said came from Srila Rupa Gosvami, and his mission would have not existed, had he left out Srila Rupa Gosvami.

He wanted to reveal all the confidential topics given by Srila Rupa Gosvami Prabhupada, and he kept those truths in his books. He saw that at that time there was a lack of qualification in his disciples and others, and therefore, in general, he could not reveal those truths openly. He kept that service for his disciples.

Now we will return to Sri Rupa-Sanatana Gaudiya Matha. I think you should all be there in the evening at 4:30, for glorification of Srila Rupa Gosvami.