Why Not Only One Book? 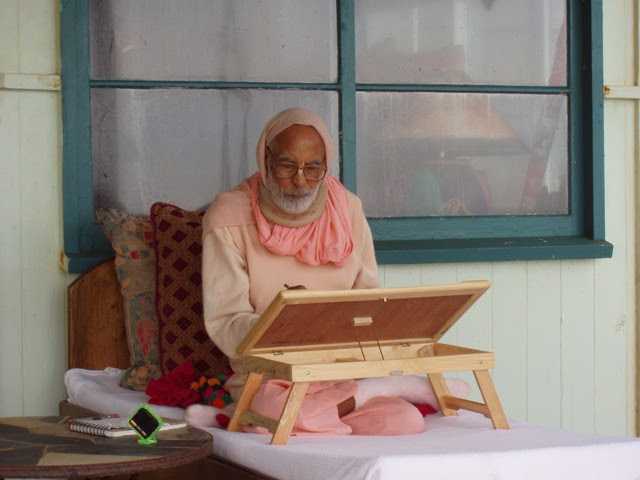 I have come here to share with you the teachings of Sri Caitanya Mahaprabhu.

Sri Rupa Gosvami knew the mood of Sri Caitanya Mahaprabhu, because Mahaprabhu had inspired in his heart the contents of His own heart regarding the reason He descended from Goloka-Vrndavana to this world. It was in Prayaga that the Lord first inspired in his heart His own aim and objective. Then in Puri He requested Sri Nityananda Prabhu, Sri Svarupa Damodara, Sri Raya Ramananda, and all His personal associates to bestow their mercy upon Srila Rupa Gosvami, so that Rupa Gosvami could establish in this world His innermost desire. By Mahaprabhu’s inspiration and mercy, Rupa Gosvami was then able to write Bhakti-rasamrta-sindhu, Ujjvala-nilamani, Lalita-madhava, Vidagdha-madhava, and so many other books.

Krsna had four reasons for descending from Goloka-Svetadvipa  to this world.

[May the Supreme Lord who is known as the son of Srimati Saci-devi (Sacinandana), be transcendentally situated in the innermost chambers of your heart. Resplendent with the radiance of molten gold, He has appeared in the Age of Kali by His causeless mercy to bestow what no incarnation has ever offered before: the most sublime and radiant mellow of devotional service, the mellow of conjugal love.?*]

Krsna’s primary internal reason was that He wanted to relish the internal moods of Srimati Radhika. He considered that although He is so beautiful and sweet, He could not experience what it is in Him that makes Her so maddened.

He could not relish Himself to the extent She could. Thus, He wanted to know the glory of Her love, the nature of the qualities within Him that madden Her so, and the pleasure She experiences by remembering Him. The mood He thus relished is called unnatojjvala-parakiya-bhava (also known as aupapatya bhava), the most brilliant mood of a transcendental paramour.

He wanted to give His mercy: karunayavatirnah kalau samarpayitum unnatojjvala-rasam sva-bhakti-sriyam. Sva-bhakti-sriyam refers to manjari-bhava, the mood of Srimati Radhika’s maidservant. Since Mahaprabhu especially desired to give this one gift, and He did so, why did Srila Rupa Gosvami write so many books, including Bhakti-rasamrta-sindhu and Upadesamrta? Why did he not write only about the topics of manjari-bhava, exclaiming, “Oh, all of you devotees throughout the world should accept only manjari-bhava”? Why did he not write only one book, saying, “You are all manjaris”? Why? This is the question.

Are all devotees in only one stage of bhakti, or are they in different stages? Actually, there are millions of stages of bhakti, and one manjari-bhava. Manjari-bhava is certainly our highest aim and object, but Srila Rupa Gosvami has written in his Bhakti-rasamrta-sindhu:

[Those who are well-versed in transcendental knowl­edge (tattva-vit) know full well that all the various limbs of bhakti, such as sravana and loud kirtana, should also be practiced in raganuga-bhakti.]

He has also written:

One will have to follow the rupanuga Vaisnavas, in their sadhaka-rupena, their forms as devotional practitioners, and in their siddha-rupena, their fully perfect forms as associates of Sri Sri Radha and Krsna. We should follow sadhaka-rupena in the teachings of Srila Rupa Gosvami regarding the limbs of bhakti, the rules and regulations. On one hand, rupanuga-bhakti does not manifest simply by reading sastra or by following rules and regulations, but you must know that in order to have greed for rupanuga-bhakti, it is essential to observe the sastric injunc­tions. You will have to obey sastra, otherwise you will simply create disturbance in bhakti.

[Devotional service of the Lord that ignores the autho­rized Vedic literatures like the Upanisads, Puranas and Narada-pancaratra is simply an unnecessary distur­bance in society.?*]

The meaning of seva sadhaka-rupena siddha-rupena catra hi is that the raganuga-bhakta, or more specifically, the rupanuga-bhakta will follow the rules and regulations of bhakti as Srila Raghunatha dasa Gosvami did externally, and internally he will follow the mood of Rati Manjari (Srila Raghunatha dasa Gosvami’s form in Radha-Krsna’s pastimes). Those who have no greed, that is, those who are not at the stage of bhava-bhakti, will not be able to follow him.

It is necessary to follow all the instructions written in Upadesamrta. If you boycott Upadesamrta, your bhakti will be only illusory; it will cheat you. Try to follow Srila Rupa Gosvami, who is akhanda-guru-tattva, the complete undivided principle of guru.

Not everyone is in the same stage of bhakti. Everyone is in different stages. If one is a neophyte and does not have even sraddha (faith in the words of Krsna, guru, and Vaisnavas), how can you tell him, “You are a manjari; book your ticket for only the manjari mood”? I want to tell you all, that this is a very wrong idea. Try to truly understand and then follow the real meaning of rupanuga.

When Nityananda Prabhu preached in the assembly of Jagai and Madhai, they beat Him and blood flowed from His head, but still He gave them krsna-prema. He preached throughout Bengal and other parts of India, but what was He preaching? Did He preach, “Oh, you are a manjari”? He never did so.

Nityananda Prabhu is the root akhanda-guru-tattva. Does He have the mood of a manjari or not? Yes, he is Ananga Manjari, but he did not preach about this. One may think, “He does not have a manjari mood and He did not preach it, so He is not guru. I will not obey Him. I will obey only Srila Rupa Gosvami.” A person who thinks in this way is bogus. He is an offender at the lotus feet of the entire guru-parampara.

We will have to obey the entire guru-parampara. My disciples who are preaching Krsna’s holy name know what is the mood of the manjaris, but not all of them are qualified to have it. Be very careful about this. Don’t commit offenses at the lotus feet of Vaisnavas. Suppose someone says, “If there is a difference of opinion between Gurudeva and Aranya Maharaja [later to become Prema-prayojana dasa], I will follow Aranya Maharaja and not Gurudeva.” What is this? This is called guror-avajna (neglecting the authority of gurudeva and disobeying his instructions). It is only because of Gurudeva that Aranya Maharaja, or any other disciple, knows who is Srila Rupa Gosvami and what is the mood of a manjari. This is a bogus idea. If you have this idea, then kindly correct your feelings; otherwise all your ‘moods’ will vanish. I have told this to all of you, because nowadays a wind is blowing in this direction: “We will follow only the mood of the manjaris; nothing else, nothing else, and nothing else.”

Only if a real transcendental greed has entered your heart to serve Sri Radha and Krsna do these symptoms manifest:

[“When bhava-bhakti, the seed of ecstatic emotion for Krsna, fructifies, the following nine symptoms manifest in one’s behavior: forgiveness, concern that time should not be wasted, detachment, absence of false prestige, hope, eagerness, a taste for chanting the holy name of the Lord, attachment to hear the descriptions of the transcendental qualities of the Lord, and affection for those places where the Lord resides – a temple or a holy place like Vrndavana. These are all called anubhavas, subordinate signs of ecstatic emotion. They are visible in a person in whose heart the seed of love of God has begun to fructify”?* (Bhakti-rasamrta-sindhu 1.3.25–26).]

Srimad-Bhagavatam is the spotless evidence regarding Sri Krsna’s transcendental pastimes and any other transcendental topic. But is the manjari mood directly written about anywhere in Srimad-Bhagavatam? It is not, although it is indirectly indicated in many places. There is even no direct mention of the name ‘Srimati Radhika,’ ‘Lalita,’ or ‘Visakha.’ Why is this so? Did Srila Vyasadeva or Srila Sukadeva Gosvami not know their names? On the contrary, Srila Sukadeva Gosvami would faint when uttering Radhika’s name.

Since Srimad-Bhagavatam has not openly declared the manjari mood, we also should not do so. We are not greater than Sri Vyasadeva, Srila Sukadeva Gosvami, Srila Rupa Gosvami or Sri Caitanya Mahaprabhu. We should keep that mood in our hearts, as a wife who has a paramour does not give her husband any such indication. In India it is done like this, but not in the West. Westerners can declare more than ten husbands at a time, but in India, to declare another beloved would create a very big problem.

I request that if you think you have greed for the mood of a manjari, keep it in your heart so that nobody can have a scent of it. Otherwise, in a day or two you may commit offenses and your mood will disappear forever. This is not a subject for preaching everywhere in the marketplace. Keep it inside, like camphor. If camphor burns at an open doorway it evaporates, whereas if it is kept hidden behind closed doors, its fragrance will increase. It is very good if one has actual greed. I appreciate this, and I offer my heartfelt blessings to you if you have this. But keep it in your heart and don’t disturb others, otherwise they will end up collecting so many lady friends and engage in so-called parakiya mood, meaning illicit and immoral connection with the opposite sex.

My request is this: do not be mad to be a manjari. First try to follow Sri Upadesamrta, and then the other writings of Srila Rupa Gosvami. You can then gradually reach the top of the bhakti tree. Don’t try to jump at once to the top of the tree, otherwise you may fall down, break your arms and legs, and crack your head. So be careful.