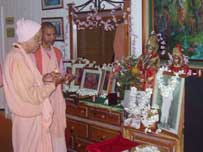 Parama-pujyapada Srila Bhaktivedanta Swami Maharaja has bestowed so much mercy upon me. In his last days he called me to his side, took my hands and placed it in his hands, and weeping, he told me, “I have collected so many devotees from Western countries, Eastern countries and here and there. I am worried because I could not train them fully. They were not ready to be trained fully. You are so qualified; you must help them. This is my first request. Also, you should give me samadhi with your own hands, and perform my viraha mahotsava (separation) festival." The purpose of my visit to all countries is to help his devotees, and to also help new devotees.

Srila Bhaktivedanta Swami Maharaja was the biggest arm of Srila Prabhupada Bhaktisiddhanta Sarasvati Gosvami Thakura. He was his long arm. He went to Eastern and Western countries, and it was a miracle that in a couple of years he preached everywhere and established so many preaching centers. I think that all who are now becoming devotees and coming to me, are coming because of him – through reading his books, and through his preaching and other activities. I have no credit in this, but I served him since 1946 and that is why he has inspired me. By his power I am going here and there preaching, and so many are attracted and listening.

The goal of his preaching and my preaching is the same. I am not telling you anything different from him. Someone may propagate that our preaching is different, but I think we are the same. He came to Western countries and tried to clear away the jungles of so many unwanted philosophies and activities. He kept a field for me and said, “On this field you can plant bhakti to Krsna like that of the gopis. Though he generally did not preach openly that this is our aim and object, he wrote about it in his books and it is his inner mood. Otherwise why would all his songs and prayers be in that mood, like “Radhe, Jaya Jaya Madhava Dayite” and “Jaya Radha Madhava, Jaya Kunja-vihari”?

“I worship Govinda, the primeval Lord, the first progenitor, who is tending the cows, yielding all desires, in abodes built with spiritual gems and surrounded by millions of purpose trees. He is always served with great reverence and affection by hundreds and thousands of goddesses of fortune.”

The innumerable Laxmis (goddesses of fortune) are none other then the gopis, and the main gopi is Srimati Radhika. Why was Srila Swami Maharaja preaching about this? The goal of our preaching is the same – what was taught by Srila Rupa Gosvami:

[“May the Supreme Lord who is known as the son of Srimati Saci-devi be transcendentally situated in the innermost chambers of your heart. Resplendent with the radiance of molten gold, He has appeared in the Age of Kali by His causeless mercy to bestow what no incarnation has ever offered before: the most sublime and radiant mellow of devotional service, the mellow of conjugal love.” (Caitanya-caritamrta Adi-lila 1.4)]

What was Srila Rupa Gosvami teaching? What is the aim and object of Sri Caitanya Mahaprabhu’s coming to this world? Karunaya – by His mercy, Lord Krsna has taken the intrinsic mood and beauty of Srimati Radhika, and come to this world.

Similarly when Krsna approaches a manjari (maidservant of Srimati Radhika) to personally enjoy pastimes with her, she waves her hand, indicating, “No, no. Absolutely not.” This is the mood of the manjaris headed by Rupa Manjari, Lavanga Manjari, Rati Manjari and others.

Sri Caitanya Mahaprabhu came to give this mood – through nama-sankirtana. You should not think that what we are doing is nama-sankirtana. Rather it is the beginning stage of nama-sankirtana. When our chanting will mix with the mood of the manjaris, then it will be real sankirtana. I have come to clarify this point. Srila Swami Maharaja explained this in his books, but he did not elaborate on it in his general preaching. The world, and also the world of devotees, was full of jungles of philosophical misconceptions and anarthas; so how could explanations of manjari bhava be heard?

His Gurudeva, Srila Bhaktisiddhanta Sarasvati Takura has said, “I have come to give this mood:

[“When will Sri Rupa Gosvami give me the shelter of his lotus feet? Because he understood the innermost desire of Sri Caitanya Mahaprabhu, he was able to establish His mission in this world and is very dear to the Lord. (Sri Prema-bhakti-candrika, Narottama dasa Thakura)”]

[“Clasping a straw between my teeth, I repeatedly beg to attain the dust of the lotus feet of Srimad Rupa Gosvami birth after birth.” (Sri Mukta-carita, Raghunatha dasa Gosvami)]

At first, Srila Prabhupada Bhaktisiddhanta Sarasvati Thakura also cut the jungles of mayavada, sahajiya, sakhi-beki and other philosophical misconceptions. Later, however, when he was at Radha-kunda with thousands of devotees during Vraja-mandala parikrama, he said, “Don’t think that our final aim and object in bhakti is what I am telling you now. It is not this. Our goal is Radha-kunda and the service of the gopis to the divine couple Sri Sri Radha-Krsna. You should always remember this, otherwise you will only be a karmi.”

So our mission is the same. I have come to help you; to remind you of the mission of Srila Swami Maharaja, Srila Rupa Gosvami and Sri Caitanya Mahaprabhu.

After Srila Swami Maharaja departed from this world, some of his sannyasis and other devotees became weak. So many sannyasis married. I think at that time all of you here who are his disciples were brahmacaris, and now you are all are married – only due to weakness. If he were physically present now, this would not be. So I thought it best to come and help you – to fulfill the order of my siksa-guru. That is why I have come.