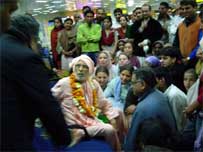 Srila Prabhupada Bhaktisiddhanta Sarasvati Thakura would become very angry when he spoke about the smarta presentation of varnasrama. He declared, “We should follow daiva-varnasrama, but smarta varnasrama-dharma should be ruined at once.”*[4]

Are you in daiva-varnasrama-dharma or are you out of it?

[Devotee:] I don’t know what the difference is between the first one and the second one. I thought we are supposed to be trying to get out of the varnasrama-dharma.

[Srila Narayana Maharaja:] All brahmacaris, grhasthas, vanaprasthas and sannyasis are within varnasrama. The asramas are brahmacari, grhastha, vanaprastha and sannyasa. We are all naturally part of varnasrama, and we should therefore try to accept and very strongly follow its principles. Those who are married should be ideal grhasthas, following the instructions in Sri Hari-bhakti-vilasa. It is not that one may have two, three, four or five marriages. Be satisfied with one wife or husband, and don’t divorce. Remain together for your entire life. Then afterwards, in old age, if you have life, give up all entanglements and become absorbed in bhajana.

Brahmacaris and sannyasis should hear hari-katha; then they will automatically become detached. Why should a sannyasi marry? He should never marry. And why should a vanaprastha marry again? Varnaprasthas should be very strict. They should try to gradually progress, not to go down. If a brahmacari is going to marry, or if a vanaprastha gives up his old wife and wants a new one, it simply means that lust and so many anarthas are present in his heart and his activities.

So try to advance. If you are grhastha, remain in that position and be ideal, like Srivasa Pandita, Sri Advaita Acarya, the Pandavas and many others like them. Be ideal; follow Hari-bhakti-vilasa.

[Devotee:] Varnasrama dharma is not the goal, because Mahaprabhu rejected it. He said it is only like a platform.

[Srila Narayana Maharaja:] But the platform must come first. If even a sannyasi is marrying, where is his platform for developing bhakti? If a brahmacari is always independently going here and there, and a grhastha is remarrying and again remarrying, and within his marriage he does not follow the scriptural principles of household life, this will not do. There should be a ground, a foundation, and that foundation should be very strong.

[Srila Narayana Maharaja:] This is not daiva-varnasrama. Any sudra, any person who eats cow meat and other forbidden things, any Mohammedan, Christian or Buddhist, can come and follow daiva-varnasrama-dharma. At first, in the Sankara-sampradaya and even in the Ramanuja and Madhava sampradayas, only a born-brahmana could be given sannyasa. But Srila Prabhupada Bhaktisiddhanta Sarasvati Thakura introduced the understanding, and also the practice, that anyone can be given sannyasa – not ladies, but all males can – whether they are sudras, Mohammedan, outcasts, Christians or persons of any other religious faith, position, cultural or family background.*[5] They can all take sannyasa.

Srila Prabhupada Bhaktisiddhanta Sarasvati Gosvami established this, and his followers have also established it. Otherwise, besides him, the members of our samaja (society) were not accepting his understanding at all. He was very bold, and he boldly taught and acted according to the principles of daiva-varnasrama. Thus, many smarta-brahmanas opposed him.

[Gopa-vrindapala dasa:] Srila Gurudeva, after Mahaprabhu and before Srila Bhaktisiddhanta Sarasvati Thakura Prabhupada, was there no varnasrama in the Gaudiya line?

[Srila Narayana Maharaja:] They used to wear paramahamsa-vesa, the dress of the paramahamsa. Paramahamsa is more than sannyasa, but these people also rejected daiva-varnasrama and its principles and became so-called paramahamsas. *[6] We are sannyasis. Even if we give someone babaji-vesa (the dress and station of a babaji, he is still in varnasrama. An ordinary person cannot be a paramahamsa. Lord Nityananda Prabhu*[7] and Srila Sukadeva Gosvami*[8], who are real paramahamsas, are allowed even to be naked. Such pure devotees are beyond all rules and regulations, and they are even beyond the control of the Vedas.

[Padmanabha Maharaja] If babaji-vesa is still within varnasrama, why are some persons given babaji-vesa instead of sannyasa?

[Srila Narayana Maharaja:] Regarding avadhuta-vesa,*[9] this is not given at all. Rather, it comes automatically. The pure devotee avadhuta may be naked or he may marry – whatever he does or doesn’t do, there is no harm for him. Nityananda Prabhu was a paramahamsa avadhuta. He married, and there was no harm for him in that. Lord Sri Krsna married thousands upon thousands of wives, and at the same time He is the topmost paramahamsa.

*Endnotes:
1. [“Human civilization begins from the stage of varnasrama-dharma, or specific duties in terms of the specific modes of nature of the body obtained. Discharging one’s specific duty in any field of action in accordance with the orders of higher authorities serves to elevate one to a higher status of life. (Bhagavad-gita 2.31 purport)”]

3 and 5. [Yes. Striyo vaisyas tatha sudrah. This striya, generally they take it, “Even she is prostitute,” striya. Te ’pi yanti param gatim: “They can also go back to home, back to Godhead.” Mam hi partha... If he takes Krsna very seriously, then everything is possible. No impediment. Ahaituky apratihata. Krsna devotional service is so strong that it cannot be checked by any material impediments. The smartas, they are thinking like that, “How these mlecchas and yavanas can become a brahmana?” But they do not know that by Krsna consciousness one can jump over. Mayam etam taranti te. Daivi hy esa gunamayi mama maya duratyaya [Bg. 7.14]. Maya is very strong. Therefore there are gradual process. Varnasrama-dharma, karma-tyaga, this, that, so many things, pious activities, rituals. But this is the process, step by step, to cross over maya. But Krsna said, mam eva ye prapadyante mayam etam taranti te. Anyone who surrenders to Krsna sincerely, immediately he crosses over. As Krsna says in another place, aham tvam sarva-papebhyo moksayisyami: [Bg. 18.66] “I’ll do immediately.” So maya means papa. Unless one is sinful, he cannot be in maya. So if one surrenders, then he, means, immediately crosses over maya. So these smarta brahmanas, they consider this thing. They are thinking, “How a person born in other families, they can become brahmana?” (Srila Prabhupada, Morning Walk, February 9, 1976)]

[“One can acquire the respective qualifications by one’s own efforts, and thus the son of a Vaisnava can become a mleccha, or the son of a candala can become more than a brahmana, all in terms of their association and intimate relation with the Supreme Lord.” (Srimad-Bhagavatam 1.16.20 purport)]

4. [“Srila Bhaktisiddhanta Sarasvati Thakura, however, wanted to re-establish daiva-varnsarama. In daiva-varnasrama there cannot be acknowledgement of social status according to birthright because in Bhagavad-gita it is said that the determining considerations are guna and karma, one’s qualities and work. It is this daiva-varnasrama that should be established all over the world to continue a perfect society for Krsna consciousness. This may be astonishing to foolish critics, but it is one of the functions of a Krsna conscious society.” (Srimad-Bhagavatam 5.1.24 purport)]

6. [After Sriman Mahaprabhu, His lila-parikaras (eternal pastime associates) such as the six Gosvamis, Sri Lokanatha and Bhugarbha, and later Sri Krsnadasa Kaviraja, Sri Narottama Thakura, and Sri Visvanatha Cakravarti Thakura were naturally niskincana paramahamsa Vaisnavas. There was no need for them to wear sannyasa-vesa, saffron cloth. Secondly, Sriman Mahaprabhu had performed the lila of wearing sannyasa-vesa and saffron cloth. Thus considering themselves to be worthless, lowly and unqualified, these mahatmas did not wear sannyasa-vesa and saffron cloth in order to show honor and respect to the vesa of Sriman Mahaprabhu and also to maintain their own identities as servants under the shelter of His lotus feet. On the other hand, in order to express veneration for the niskincana paramahamsa-vesa of the associates of Sriman Mahaprabhu, and, under their guidance to preach His message throughout the entire world, many akincana Vaisnavas on the path of raganuga-bhajana, holding the paramahamsa-vesa upon their heads, have accepted a position below their worshipable superiors by wearing the saffron cloth of the sannyasa asrama which is included within the system of varnasrama dharma. These two customs, each having their own place, are both exquisitely beautiful and also completely in accordance with siddhanta. Today suddha-hari-bhakti has been, is being, and will continue to be, preached and spread throughout the world by these mahapurusas, great perfected saints, who wear this second type of niskincana sannyasi-vesa. (from Five Essential Essays)]

[“When Srila Bhaktisiddhanta Sarasvati Thakura saw that many babajis were now bogus, that they were with widow matajis and producing sons, he became very furious and said that we will again accept the same saffron cloth of others like Ramanujacarya, Madhvacarya, Mahaprabhu, and Isvara Puripada. He then preached everywhere in the world. At that time, those family persons who were of loose character and had no status in society honored these bogus babajis. That is why Srila Prabhupada Bhaktisiddhanta Sarasvati Thakura re-introduced the reddish cloth and sannyasa. Presently, those who are bogus persons, but were previously in the Gaudiya Matha, have become lusty and have thus been kicked out from the Gaudiya Matha. Now they have become babajis.” (Lecture by Srila Nararyana Maharaja, June 10, 2001)]

7. [“By calling Nityananda Prabhu a bhrasta avadhuta (a rejected paramahamsa), Advaita Acarya Prabhu in a sense accepted Nityananda Prabhu as a paramahamsa. In other words, Nityananda Prabhu had nothing to do with the rules governing smarta-brahmanas. Thus under pretense of condemning Him, Advaita Acarya was actually praising Him. In the avadhuta stage, the paramahamsa stage, which is the supermost stage, one may appear to be visayi, on the platform of sense gratification, but in actuality he has nothing to do with sense gratification. At that stage, a person sometimes accepts the symptoms and dress of a sannyasi and sometimes does not. Sometimes he dresses like a householder.” (Sri Caitanya Caritamrta Madhya-lila 3.85 purport]

8. [At that moment there appeared the powerful son of Vyasadeva [Sri Sukadeva Gosvami], who traveled over the earth disinterested and satisfied with himself. He did not manifest any symptoms of belonging to any social order or status of life. He was surrounded with women and children, and he dressed as if others had neglected him. (Srimad-Bhagavatam 1.19.25)]