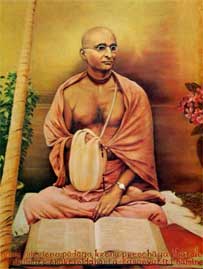 Srila Prabhupada arrived at the temple at mid-day, he saw everything, and he became pleased. Then he asked, “Where is the brahmacari who came here first and worked so hard.” They told him, “Master, that devotee was a very good brahmacari, but then he became entangled with a lady. We rebuked him so much for his behavior that he fled from this place.”

Srila Prabhupada said, “I don’t want to establish a preaching center here, nor do I want to install the Deities. You know, in this world we spend hundreds of gallons of blood to bring a person out of the clutches of maya, and if that person makes some mistake, it will be washed away by his serving Hari, Guru, and Vaisnavas. But you have chastised him and he has gone away. So I don’t want to make a center here. Search for him and bring him to me; otherwise I will go away.”

All the disciples became very anxious, and they began searching everywhere for that brahmacari who was entangled with a lady. Sripad Madhava Maharaja, who at that time was named Hayagriva brahmacari, somehow discovered his whereabouts. He apologized to that brahmacari, and said, “Please excuse me. Srila Prabhupada is very unhappy with us. Please come.”

The brahmacari began to weep, saying, “Prabhupada is very merciful. I was serving here, in a watch company, but I was not really happy. I wanted to return, but I was thinking, ‘How can I show my face?’ So I did not return. But Srila Prabhupada has called. What endless mercy he has! He is more merciful than Lord Krsna.” He at once went running and weeping to Srila Prabhupada, fell flat at his Guru Maharaja’s lotus feet, and all his anarthas were washed away in a moment.

So, don’t criticize anyone – neither a devotee nor a worldly person. It has been told in Srimad-Bhagavatam (11.28.1-2):

[“The Supreme Personality of Godhead said: ‘One should neither praise nor criticize the conditioned nature and activities of other persons. Rather, one should see this world as simply the combination of material nature and the enjoying souls, all based on the one Absolute Truth.”]

[“Whoever indulges in praising or criticizing the qualities and behavior of others will quickly become deviated from his own best interest by his entanglement in illusory dualities.”]

Don’t glorify worldly persons, whether they are good or bad. If you do so, all their bad activities will come in you and your life will be spoiled.

To bring a person from the clutches of maya is very, very hard. If lust or any other attachment is present in that person’s heart it will go away very soon, if he is chanting and remembering and listening to hari-katha. Be very careful. Don’t criticize devotees – or non-devotees. First look at your own condition, and try to purify yourself. Is there any lust in you? Is there any kutinati (deceit) in you, or not? Be worried for that; don’t worry for others. Sri Guru and Lord Sri Krsna are responsible for others. You cannot do anything to help them, so you have no right to criticize.

It has been told in scripture:

[“By regular attendance in classes on the Bhagavatam and by rendering of service to the pure devotee, all that is troublesome to the heart is almost completely destroyed, and loving service unto the Personality of Godhead, who is praised with transcendental songs, is established as an irrevocable fact.”(Srimad-Bhagavatam 1.2.18)]

What is anisthita-bhakti (unsteady bhakti)? [Srila Narayana Maharaja called on Sripad Madhava Maharaja to explain the six kinds of anisithita-bhakti. To save time in transcribing, we are attaching here the explanation given in Sri Bhakti-rasamrta-sindhu-bindhu. Please see endnote 1.]

Try to listen carefully. Keep the explanation in your heart and try to follow what you are hearing.

After one passes this stage, there are no aparadhas (offenses), no hrdaya-durbalya (weakness of heart), no asat-trsna (thirst for temporary enjoyment), and no svarupa-brahma (illusions about philosophy and practical application of philosophy). However, some other anarthas remain, such as laya, viksepa, apratipatti, kasaya, rasavada, etc. [See endnote 2.]

We will gradually explain all these topics.

We will have to gallop through so many stages. Prema is not easy to attain – especially vraja-gopi-bhava. It takes thousands upon thousands of births to reach. Now you can come to the stage in which you are hearing hari-katha. If you miss this opportunity, everything will be missed. If you are following, on the other hand, all anarthas will gradually go away.

[“Sukadeva Gosvami said: O mighty Pariksit, I have related to you the narrations of all these great kings, who spread their fame throughout the world and then departed. My real purpose was to teach transcendental knowledge and renunciation. Stories of kings lend power and opulence to these narrations, but do not in themselves constitute the ultimate aspect of knowledge.” (Srimad-Bhagavatam 12.3.14)]

Srila Bhaktivinoda Thakura has explained in his Srimad Bhagavatarka-marici-mala that so many powerful kings, like Puru, Uttanapada, his brother Priyavrata and many others passed away. Srila Sukadeva Gosvami has said, “I have discussed the histories of these kings in Srimad-Bhagavatam. Why have I done so? These narrations do not constitute the ultimate transcendental attainment in and of themselves. What is there in them, then? Vairagya-vivaksaya (renunciation with the desire for teaching). What became of them? They were not happy. Sri Narada taught the allegorical history of Puranjana to King Pracinabarhi. Puranjana was not satisfied with his wife, children and kingdom; he was cheated.

You should realize the teachings of the Bhagavatam, and then detachment from worldly sense gratification will enter your heart. If you are hearing hari-katha, chanting the holy name and performing all devotional activities, renunciation must come.

We should hear all topics, such as the histories of the great kings mentioned above, for this purpose, and after that we can hear the 10th Canto of Srimad Bhagavatam narrations of the sweet pastimes of Lord Sri Krsna. First make the ground level, and then hear the glories of the Lord’s pastimes (lila-katha). We will try to explain His glories from the 10th Canto in the next three days. We have explained anartha-nvrtti, and tomorrow we will try to discuss Lord Krsna’s pastimes.

[Endnote 1 – (The following is the six kinds of unsteady bhakti (anisthita-bhakti), as explained in Madhurya-kadambini by Srila Visvanatha Cakravarti Thakura) Utsaha-mayi: A brahmana child, having just begun study of the scriptures, thinks he has immediately become a learned scholar worthy of everyone's praise. Similarly, a person just beginning devotional service may have the audacity to think that he has mastered everything. This is
called utsaha-mayi, or filled (puffed-up) with enthusiasm.

Niyamaksama: Then the devotee will resolve, "From today I will chant such and such number of rounds of japa and will pay so many obeisances. I'll also perform services for the devotees. I won't talk about anything except the Lord, and I'll give up all association with people who talk gossip." Though the devotee makes such resolutions every day, he is not always able to carry them out. This is called niyamaksama, or inability to follow rules.

Taranga-rangini: Finally, it is well-known that the very nature of bhakti is to be attractive, thus many people become attracted to the devotee. And, as the old adage goes, "By the public's attraction one becomes wealthy." Bhakti produces much opportunity for material gain, worship, and position (labha, puja, pratistha). These are weeds around the creeper of bhakti. Seeking one's pleasure (ranga) amidst these weed-like facilities, which are but small waves (taranga) in the ocean of bhakti, is called taranga-rangini, delighting in material facilities. (Madurya kadambini pages 15-18)]