Even Half Of A Half 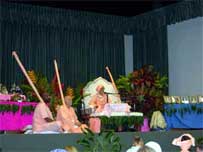 Yesterday [Vyasa-puja] we discussed guru-tattva. There are so many speakers present tonight, those who are preaching here and there. I want them to preach, but first they must learn guru-tattva and all other tattvas (established philosophical truths). They should learn all tattvas, and guru-tattva is the backbone of them all.

What is the duty of a pure disciple towards his god-brothers, gurudeva and superiors? Should he criticize others or not, and should he be humble or not? We should not criticize anyone. Always be humble and try to respect both superiors and inferiors.

Today our time is over. It is 7pm, and now the drama will be performed. There are so many speakers and I want to give time to them, but I will speak for at least one minute.

[“In the association of pure devotees, discussion of the pastimes and activities of the Supreme Personality of Godhead is very pleasing and satisfying to the ear and the heart. By cultivating such knowledge one gradually becomes advanced on the path of liberation, and thereafter he is freed, and his attraction becomes fixed. Then real devotion and devotional service begin.” (Srimad-Bhagavatam 3.25.25)]

First you will attain sadhana-bhakti, then gradually bhava-bhakti, and at last prema-bhakti. At that time you will go directly to Goloka Vrndavana and serve the Divine Couple Sri Sri Radha-Krsna, in the line of Srila Rupa Gosvami. Try to read, utter and hear hari-katha, especially from Srimad-Bhagavatam. Srila Vyasadeva and Srila Sukadeva Gosvami have stated:

[“O expert and thoughtful men, relish Srimad-Bhagavatam, the mature fruit of the desire tree of Vedic literatures. It emanated from the lips of Sri Sukadeva Gosvami. Therefore this fruit has become even more tasteful, although its sectarian juice was already relishable for all, including liberated souls. (Srimad-Bhagavatam 1.1.3)]

There was a fruit in the spiritual world that was full of rasa (nectar). It had no skin and no seed. It was simply rasa. A parrot from this world flew there and saw that fruit. He became greedy and wanted to taste it, so he put his beak into the fruit and said to himself, “Very, very tasteful.” Out of greed, he at once picked it up with his beak and returned to this world, and he has mercifully given the fruit – Srimad-Bhagavatam – to the entire world.

Those who are fortunate should go to a rasika (taster of transcendental mellows) tattva-jna (knower of all truths) Vaisnava and drink this rasa until they have fainted. Even if you are a liberated soul, you can drink this transcendental juice.

I wanted to explain these topics more elaborately, but I could not do so because of a shortage of time.

It will be best if I tell you more. So next year, if Lord Sri Krsna will arrange it, we can meet here again.

Up until now we have explained only the first verse of Srimad-Bhagavatam:

[“O my Lord, Sri Krsna, son of Vasudeva, O all-pervading Personality of Godhead, I offer my respectful obeisances unto You. I meditate upon Lord Sri Krsna because He is the Absolute Truth and the primeval cause of all causes of the creation, sustenance and destruction of the manifested universes. He is directly and indirectly conscious of all manifestations, and He is independent because there is no other cause beyond Him. It is He only who first imparted the Vedic knowledge unto the heart of Brahmaji, the original living being. By Him even the great sages and demigods are placed into illusion, as one is bewildered by the illusory representations of water seen in fire, or land seen on water. Only because of Him do the material universes, temporarily manifested by the reactions of the three modes of nature, appear factual, although they are unreal. I therefore meditate upon Him, Lord Sri Krsna, who is eternally existent in the transcendental abode, which is forever free from the illusory representations of the material world. I meditate upon Him, for He is the Absolute Truth.” (Srimad-Bhagavatam 1.1.1)]

To explain these verses, some selected verses have been given by Srila Bhaktivinoda Thakura in his Srimad Bhagavata-arka-maricimala. Among these verses, I will try to explain as many as I will have time for – perhaps one, two, three or four.

When Sri Krsna entered the wrestling arena with his brother, Lord Baladeva, they were each carrying a tusk of the elephant Kuvalayapida. Some blood was dripping from the tusks and the boys were somewhat smiling. At that time Kamsa told the very strong wrestlers, Carana, Mustika and others, “Be ready. Krsna should not leave here alive. You should all combine and kill Him at once.” The wrestlers were very tall, resembling mountains. They were ready to wrestle, and they tried to pull Krsna and Baladeva into the arena. Lord Krsna told them, “I can only wrestle with boys my age. I cannot wrestle with you.” They replied, “You have killed Putana, Agasura and Bakasura. You always wrestle while cow-herding. We know you. So come on and wrestle, and in that way we can try to please Maharaja Kamsa.” Then they forcibly pulled Krsna and Baladeva into the arena.

The wives of the Yadus were present in the audience. They saw Krsna, and they saw that the demons were dragging Him into the arena. They became furious and could not check themselves. Rebuking everyone present, they announced, “If anyone here supports the idea that the wrestlers should fight with this boy, Krsna, they will go against religious principles. We will not remain here.”

You should be like these wives of the Yadus. My daughters should be very bold. When something is going on against religion and bhakti, they should speak up.

They wives of the Yadavas spoke very beautiful verses, in which they glorified the gopis. They said: “O gopis, what high class of austerities you have performed!”

[“What austerities must the gopis have performed! With their eyes they always drink the nectar of Lord Krsna’s form, which is the essence of loveliness and is not to be equaled or surpassed. That loveliness is the only abode of beauty, fame and opulence. It is self-perfect, ever fresh and extremely rare.” (Srimad-Bhagavatam 10.44.15)]

“You are always drinking the beauty of Sri Krsna with your eyes, taking Him through your eyes into your heart, and embracing Him there. What austerities have you performed? We want the dust of your lotus feet upon our heads, so we can be like you.”

[“The ladies of Vraja are the most fortunate of women because, with their minds fully attached to Krsna and their throats always choked up with tears, they constantly sing about Him while milking the cows, winnowing grain, churning butter, gathering cow dung for fuel, riding on swings, taking care of their crying babies, sprinkling the ground with water, cleaning their houses, and so on. By their exalted Krsna consciousness they automatically acquire all desirable things.” (Srimad-Bhagavatam 10.44.15)]

“Oh gopis, how glorious you are! What austerities you must have performed!”

[“When the gopis hear Krsna playing His flute as He leaves Vraja in the morning with His cows or returns with them at sunset, the young girls quickly come out of their houses to see Him. They must have performed many pious activities to be able to see Him as He walks on the road, His smiling face mercifully glancing upon them. (Srimad-Bhagavatam 10.44.16)]

“When Krsna goes to the forest to graze the cows, and also when He returns home, you are waiting there. Having come from your houses and having given up all your duties, you gaze at Sri Krsna’s face and smile. What austerities have you performed?”

You can also think of Sri Krsna like the gopis, when sweeping or performing any activity. Krsna is very sweet, and this has been told in the above-mentioned verses.
I will continue to explain tomorrow.

I wanted to give this sweet rasa to you during my days here in Hilo, but I could not. Instead I spent most of my time here discussing tattva-jnana (philosophy).