The Acarya's Example [A Vyasa-Puja Celebration] 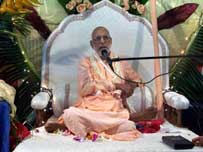 For me, today is Vyasa-puja. Actually, the meaning of Vyasa-puja is that on the birthday of an acarya who is sitting on the seat of Vyasa and is preaching everywhere, he will worship his gurudeva and his entire guru-parampara. My duty was to first worship my own Gurudeva and guru-parampara, Sri Sri Radha-Krsna, and all the other panchakas. There are seven panchakas: Vyasa-pancaka, Krsna-panchaka, guru-panchaka, acarya-panchaka, upasya-panchaka, sanakadi-panchaka and panca-tattva panchaka. These groups include worship of the acaryas of the four sampradayas, the four guru-paramparas: Ramanujya, Madhvacarya, Visnusvami, Nimbaditya and the four Kumaras (Sanaka, Sanatana, Sanat-kumara and Sanandana). These groups include Sri Panca-tattva, and especially for Sri Gaura-Gadadhara, Sri Sri Radha-Krsna and Sri Gurudeva. This worship is performed in our parampara, or disciplic succession. My Guru Maharaja used to do this, and I also used to do it. Here in the West, however, I could not do this elaborately. I wanted to, but I could not.

Moreover, today I could not first perform worship of my Guru and guru-parampara, because all the devotees were coming and doing my puja (worship). I could not understand. I thought that only one person was coming up to the Vyasa-asana.* [see endnote 1] I have done something wrong.

Anyway, it is an acarya’s duty that on his birthday he worships his gurudeva, the entire parampara, and all Vaisnavas. Whatever you have given to me, is not for me. You are offering me flowers, and I am giving them to my Gurudeva’s lotus feet. The false ego of thinking, “I am now guru” should not come. I want to be free from false ego. I want to be a guru-sevaka, a pure, unalloyed servant of guru. Whatever I have is only the result of guru-seva.

I was not a learned person. Whatever I have, I have received by the special mercy of guru and Vaisnavas. I gave my whole heart and everything I possessed at the lotus feet of my Gurudeva. When I joined the matha (the mission at the guru’s temple), I told my Gurudeva, “I am giving my heart to you. I am giving you the love and affection I had for my wife, children, father and everything else. I am taking it from them, and I am totally surrendering and placing that love at your lotus feet.”

He accepted this and began to weep. He said, “Up to now, no one else has ever told me this.” Tears came in his eyes and I received his causeless mercy. Now people all over the world are hearing from me – only because of that mercy. If you surrender to your Gurudeva, you will have everything required for perfection of life, and for making others perfect. No material learning is needed.

There was a certain disciple of Sripada Sankaracarya who was illiterate. Sankaracarya used to give class on the bank of the Ganges, on the Bhagirathi River in Badarikasrama, and there was such a strong current in that part of the river that even an elephant could not cross. Sankaracarya used to give class daily, and all his disciples in attendance were very learned and eager to hear his teachings. He especially had four very scholarly, renounced and famous disciples.

That illiterate disciple used to engage in many menial services, like washing his Guru’s clothes and cooking his meals. He was once washing clothes on the opposite side of the Ganges from Sankaracarya’s class. Class-time came, and except for him all disciples were present. Sankaracarya was waiting, not speaking, and all the scholarly disciples asked him, “Gurudeva, why are you waiting?” He replied, “I am waiting for that disciple.” They said, “He is not literate. He will not understand what you say anyway. Please begin class. We do not want to waste our time.” Still, Sankaracarya continued to wait.

Soon that illiterate disciple came, very quickly running, and bowed down to the lotus feet of Sankaracarya. At once, he began to pray to him with very elevated philosophical stava and stuti (hymns and verses). His prayers were so scholarly, in fact, that the four highly qualified disciples could not understand what he was saying.

They now realized the glories of their Gurudeva. Sri Guru is not a simple thing. By the mercy of the bona fide gurudeva, an illiterate person can become a very high-class, learned devotee, knowing all siddhanta (established philosophical conclusions).

You should have strong faith in this truth. Don’t be bewildered.

Some devotees, and even sannyasis, may think, “We should create another Trust, because we have no trust in Gurudeva’s Trust.” This is wrong. They can do this at any time. They can start their own Trust, but that is very bad. They will lose everything – even the mercy of Guru and Krsna – and they will be lost forever. Don’t think that Gurudeva is an ordinary human being.

[“One should know the acarya as Myself, and never disrespect him in any way. One should not envy him, thinking him an ordinary man, for he is the representative of all the demigods.” (Srimad-Bhagavatam 11.17.27)]

It may seem like guru is going to the bathroom, or he is eating something because he is hungry. Don’t see him as you would see an ordinary person, otherwise you will be cheated forever. Have strong faith in guru, more than in Krsna. Srimati Radhika and Krsna have sent him as Their own messenger. We should always remember this, especially on the auspicious day of Vyasa Puja.

I will discuss related topics in this evening’s class. Be ready to speak about guru-tattva, from the core of your heart. Try to follow what you will be telling, with the core of your heart. Don’t be a disciple like Ekalavya, who gave his thumb but not his heart. He did not obey his Guru, and that is why Dronacarya rejected him and took his thumb. Dronacarya knew that he was against Krsna, and later, Krsna cut off his head with His cakra.

We should remember all these things and try to be one-pointed. Life is very short. I especially fear that sometimes false ego comes in the hearts of learned disciples and they think, “I am more than my Gurudeva.” This is a very dangerous offense, and such offenders are ultimately lost forever. Don’t have false ego regarding any aptitude you may have. Always be the servant of Gurudeva. There are so many examples of pure servants, such as Srila Isvara Puripada, Srila Rupa Gosvami, Srila Sanatana Gosvami and Srila Jiva Gosvami.

My Gurudeva kept his life in his hands for his Gurudeva, Srila Bhaktisiddhanta Sarasvati Thakura Prabhupada. Of course nobody was able to do any harm to his Gurudeva, but externally it seemed that a crowd of non-devotee smarta brahmanas were trying to kill him. Guru Maharaja hid his Gurudeva in someone’s house, took his Gurudeva’s sannyasa cloth and gave him his own white cloth, and then came out of the house wearing his Gurudeva’s clothing. In this way the crowd would think he was his Gurudeva. [For the details of this history, you may read Srila Narayana Maharaja’s books, Secret Truths of the Bhagavatam and Life and Teachings of Srila Bhaktiprajnana Kesava Gosvami Maharaja.] He had no fear of death. We should try to be like him – whole-hearted disciples, obedient to Gurudeva.

[Then, after kirtana and guru-puja:]

Now you can offer prasadam to Thakurji and distribute it to all present, and you can give some remnants to me also.

[*Endnote 1: Generally, every year at the beginning of the observance of Srila Narayana Maharaja’s appearance day, the assembled devotees join him in elaborate worship of his diksa-guru, Srila Bhaktiprajnana Kesava Gosvami Maharaja, his siksa-guru, Srila Bhaktivedanta Swami Maharaja Prabhupada, and his whole guru paramapara. He offers them full arati. After that is completed, the devotees perform his guru-puja. Flowers are passed out for the devotees to offer, the men coming on a line from one side and the ladies form a line on the other side. He accepts their hearts through their offerings of flowers and gifts, and offers whatever he receives to his Gurudeva and guru paramapara.

This year, as soon as he sat down on the vyasasana, while kirtana was still going on, one devotee came with a presentation which Srila Maharaja graciously accepted. Then a second devotee came, then a third and fourth, and then all of a sudden there was a line of hundreds of devotees, offering their flowers, presentations and prayers. Many disciples also handed him cell phones, because devotees in other countries were waiting on the phone line to speak with him. He also took those calls, intermittently, one after another, and spoke long distance to each of these devotees for a few moments.

After the last person offered his obeisances and prayers at Srila Maharaja’s lotus feet, Srila Maharaja spoke the above-mentioned words. Then he began his worship of our guru paramapara.]

[*Endnote 2: “What to speak of others, Gaura-kisora dasa Babaji Maharaja. Gaura-kisora dasa Babaji Maharaja, he was illiterate. He could not sign even his name. But he was so spiritually elevated that my spiritual master, who was the topmost scholar of his time, he accepted him as spiritual master. What is the reason? The reason is that this transcendental science does not depend on academic qualification. It is, it is not that because one is very, academically very qualified, he’ll become a devotee. No. The secret is... That is given in the Vedic literatures: yasyasti bhaktir bhagavaty akincana No: