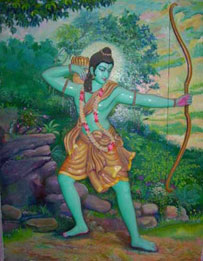 [In 2005, Srila Narayana Maharaja celebrated Lord Ramacandra's appearance day during his short visit to Penang, . The following, spoken at the house of Paramesvari prabhu and Malati dasi. There was a small group of disciples present.]

We must be one-pointed to Lord Sri Krsna, not to any other. Do you understand? Why then are we worshiping Lord Ramacandra? Someone may say, "This is not one pointed." But that is not the fact. Sri Krsna is akhila-rasamrta-sindhu. He is the enjoyer of all rasas: dasya (servitude), sakhya (friendship), vatsalya (parental affection) and madhurya (conjugal love); and in aisvarya-mayi prema seva (service in awe and reverence, or with the idea that Krsna is God) and madhurya-mayi prema-seva (service in spontaneous love, thinking of Krsna in an ordinary, human-like relationship). He is the enjoyer of all.

Sometimes, in order to enjoy maryada-mayi rasa-bhakti (devotion in awe and reverence, following the principles of etiquette), Sri Krsna comes in the form of Lord Rama, and Srimati Radhika comes in the form of Sri Sita-devi. Therefore, Radha-Krsna and Sita-Rama are non-different. If you worship Lord Rama, you are worshiping Lord Krsna Himself. Sometimes Krsna wants to enjoy vibhatsa-rasa, (ghastly rasa) killing the demon Hiranyakasipu and protecting his devotee Prahlada. Thus, Sri Nrismhadeva is also Lord Krsna.

Srila Jayadeva Gosvami has sung in his kirtana:

In Vraja He enjoys santa-rasa, dasya-rasa, sakhya, vatsalya and madhurya-rasa. In madhurya-rasa there are 360 principle moods. It is not that all gopis are in one mood. These 360 types of sakhis are nothing but the bodily manifestations (kayu-vyuha) of Srimati Radhika. Each of Radhika's moods becomes one sakhi, and Sri Krsna enjoys them all.

To fulfil one of His desires, Krsna takes the form of Lord Rama, with Srimati Radhika in the form of Sita-devi. Thus, when we worship Lord Rama we should not think that we are not one-pointed in worshiping Sri Sri Radha and Krsna. As Lord Rama, Sri Krsna made His pastimes so heart-wrenching that any person will weep by hearing them.

When Lord Rama was born, His three manifestations were with Him: Bharata, Laksmana and Satrughna. They are non-different from Him. To show how to serve Himself, Rama came in the form of Bharata, Satrughna and Laksmana.

Lord Rama's father Dasaratha Maharaja had more than one thousand queens, and 360 were prominent, but he had no son. Somehow, with the help of Srnga Rsi, he performed a son-giving fire sacrifice and then his four sons were born.

Before this, Dasaratha Maharaja once went out hunting, and that night he went to the nearby house of his friend Kaikeya Maharaja. King Kaikeya had a daughter named Kaikeyi. Maharaja Kaikeya told his daughter, "You should look after Dasaratha Maharaja's prasadam and well-being." She served in such a way that Maharaja Dasaratha was very satisfied with her service, and he became attracted to her beauty and qualities. The next morning, before returning to Ayodhya, he told the king, "I want something. Please give me a donation."

Kaikeya Maharaja asked, "What donation do you want?"

Dasaratha Maharaja replied, "I want your daughter. She is very qualified, and I want to marry her."

King Kaikeya began to laugh. He rejected Dasaratha Maharaja's proposal, saying "I cannot give my daughter to you.

King Kaikeya replied, "You have so many queens! I will marry my daughter only to that person whose son will be the king. If you want to marry her, you will have to promise that the son born from her womb will be king. Only then will I give her to you in marriage."

Now Dasaratha Maharaja began to laugh. He said, "I have no child. If your daughter can give me a son I will be very fortunate, and he will automatically be the king."

By fortune, by the power of the child-giving fire sacrifice, Dasaratha Maharaja soon had four sons. First Rama was born from Kausalya, then Bharata from Kaikeyi, and then Laksmana and Satrughna from Sumitra. In Indian culture it is said that only the eldest son will be the king. Maharaja Dasaratha was now in a dilemma regarding what to do.

When they were old enough, Rama and His brothers went to the school of Vasista Muni. There they learned everything required, and then they returned to their father's house.

One day Lord Rama was playing in the lap of Mother Kaikeyi. Kaikeyi loved Him more than she loved her own son Bharata, and Rama always played in Kaikeyi's lap, more so than he played with Kausalya. That day Lord Ramacandra told Kaikeyi, "Mother, I want a boon from you."

Kaikeyi asked, "What boon do you want?"

Lord Rama replied, "If I ask, you will have to give it to Me. Do you promise?"

She promised and said, "I can even give my life for You."

Lord Rama replied, "I don’t want your life. I want you to tell Maharaja Dasaratha that your son Bharata should be king; and I, Rama, should be exiled to the forest."

Kaikeya said, "Oh, I cannot do this."

Lord Rama replied, "But you promised! If you do not fulfill my request, everything will be spoiled. I am telling you something very confidential. I am the Supreme Personality of Godhead. All the demigods, such as Lord Brahma and Lord Sankara, have prayed for Me to come and kill demons like Ravana and others. These demons are the burden of the Earth, and their destruction cannot be accomplished by anyone but Me."

Kaikeyi then began to weep. She told Lord Rama, "If I can give my life for You, I will do this for you."

This is why she asked the two benedictions from Maharaja Dasaratha.

[Question:] So Kaikeyi is heroine of Ramayana?

[Srila Narayana Maharaja:] Yes, according to my opinion.

[*Endnote 1: Kesava refers to Lord Krsna in Vrndavana, who has fine hair and who decorates the hair of Srimati Radhika.]