On the Way to Australia 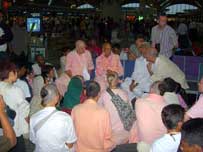 [Question:] What is it that King Hariscandra realized after Visvamitra Muni took everything from him?

[Srila Narayana Maharaja:] At the end Visvamitra Muni instructed him, "I wanted that Sri Ramacandra would appear in your dynasty, so I wanted you to become qualified for this. I considered that it was not good for you to think, 'I am Hariscandra, this is my kingdom, and this is my wife.' I even took away your wife through the medium of that brahmana. You lost your kingdom but you still thought, 'I am King.' You could not forget this. Now you should forget all material conceptions of yourself. Now you should think, 'I am the part and parcel of God. I am His servant.' You forgot this, and that is why you suffered. Now Rohitasva will be king. You will go to heaven, because you still have some slight material contamination. Then, after tasting the fruit of your worldly activities, you will return here and practice bhakti-yoga."

[Question:] Did he teach him how to meditate on Lord Ramacandra?

[Srila Narayana Maharaja:]: It is not written.

[Syamala dasi:] Gurudeva, you were present there? You said if Hariscandra had come to you…

[Srila Narayan Maharaja:] No. But if I were there I would not have disturbed him, because he is a servant of Sri Rama; and Rama is no one but Krsna.

[Devotee:] Srila Gurudeva, this is the collection from our donation box. It is a donation for the Navadvipa temple.

[Srila Narayana Maharaja:] Very good. I think that drop by drop the pond will be filled. I want to make a big classroom there.

[Tridandi Maharaja:] But even then it would be too small, because more people will come.

[Srila Narayana Maharaja:] I thought that only one thousand persons would come with us on Navadvipa parikrama last month, but there were more than 10 thousand.

[Question:] Some persons say that even though you are giving the service of Srimati Radhika, most of the devotees do not have that svarupa (the constitutional position of the soul). Most don’t have the constitutional form of a maidservant of Sri Radha. Such persons say that your followers mostly have other svarupas, and are getting other moods from you, even though you are externally preaching manjari-bhava.

[Srila Narayana Maharaja:] I have not said this. Those who will be in madhurya-rasa will be attached to me; they will come. But I tell all of them to begin from sravanam and kirtanam – vaidhi-bhakti. They should progress gradually and not imitate advanced devotees.

[Question:] Most everybody who comes to you has madhurya-rasa and this bhava-ullasa-rati  as their svarupa?

[Srila Narayana Maharaja:] I know that generally those who came to Mahaprabhu had that svarupa. Some exceptions were there, but almost all were in madhurya-rasa.

[Question:] And similarly those who came to the gurus in His line?

[Srila Narayan Maharaja:] From siddha bhaktas to sadhaka bhaktas. Somehow I also came. I was out of touch of any Gaudiya Vaisnava. I was in Bihar, serving here and there; but now I am like a teacher, preaching this line everywhere. This is a miracle.

How did I come? I was attracted by Sri Caitanya Mahaprabhu and his followers. Pujyapada Nrsimha Maharaja and Pujyapada Trivikrama Maharaja came to my door and brought me to my Gurudeva. I had thought I would serve Rama, Laksmana, Sita and Hanuman [*See Endnote], but the devotees changed my mood. Now I know that Krsna is Rama. Rama is one of the rasas of Krsna. Rama is not full, in the sense that he is a plenary manifestation of the complete source of all incarnations, Sri Krsna. In Krsna everything is full. Krsna is Rama. Radhika is Sita – but in the mood of maryada (etiquette and awe and reverence). I think that by their mercy I have come to this line of Sri Caitanya Mahaprabhu and Sri Krsna.

[Damodara Maharaja:] What was the first thing your Gurudeva said to you when you first met him?

[Srila Narayana Maharaja:] He said, “I want to give you initiation." I told him, “Whatever I have – my love and affection for my wife, children, father and mother – I am taking it and giving it all to you.” Then he began to weep. He told me, “I will keep you with me always,” and he did so. In Navadvipa, in November, he met me; and after that our parikrama came and he initiated me on Gaura-purnima.

I expect five or six hundred devotees to be at the festival in Australia. I want some brahmacaris and sannyasis to remain in Malaysia, because that country is near to India. So many preachers come there, preach there, and they go.