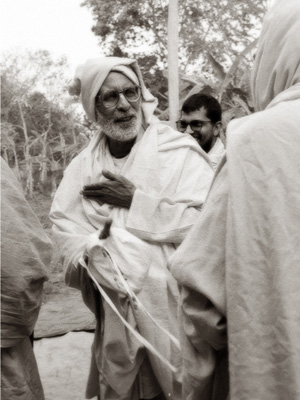 [In 2006, over seven hundred devotees from India and abroad were present each evening for Srila Rupa Gosvami's disappearance day festival and Sri Baladeva Prabhu's appearance day festivals  held from August 6-9. Also in the mornings, several scholars and senior, scholarly devotees spoke on this occasion. Although seated on the raised platform with the several scholars present, Srila Narayana Maharaja spoke only a few words due to health restrictions. We are presnting this lecture from previous year, 2005, glorifying both Srila Rupa Gosvami and Sri Baladeva Prabhu.:]

Many people have spoken tonight about Srila Rupa Gosvami. Even if Anantadeva (the many-thousand-headed serpent who holds the universes on his hoods) speaks for thousands of years with his thousands of mouths, he will not be able to complete the topic of Rupa Gosvami. Srila Rupa Gosvami's pastimes, characteristics and transcendental qualities are oceanic. I am on the shore of that ocean, looking at that ocean. I have a desire to enter it, but I am not even able to touch it. 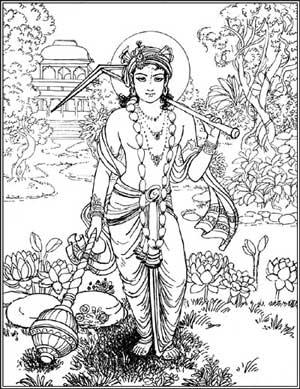 Srila Rupa Gosvami took the definition-verse of the Srimad-Bhagavatam:

Explaining that verse, he gave the definition of bhakti:

The beginning stage of uttama-bhakti is sadhana-bhakti, and Srila Rupa Gosvami defined that as well:

If we don't know the meaning of bhava, how can we do sadhana? Therefore, Srila Rupa Gosvami has given the definition of bhava-bhakti as well:

["When devotional service is executed on the transcendental platform of pure goodness, it is like a sun-ray of love for Krsna. At such a time, devotional service causes the heart to be softened by various tastes, and one is then situated in bhava (emotion). (Sri Caitanya Caritamrta, Madhya-lila 23.5)

Prema (devotional service in pure love of God) is compared with the sun, and bhava-bhakti is like one ray of that sun. Those who have achieved bhava and are performing bhakti to achieve prema, are practicing another type of sadhana, called bhava-bhakti.

What is prema? Srila Rupa Gosvami also gave that definition. In prema there are particular symptoms present in the heart: the devotees' heart is completely melted, and he is endowed with a sense of complete possessiveness (mamata) towards Sri Krsna. For example, Mother Yasoda thinks, "Krsna is my son."

Srila Rupa Gosvami has given us all these definitions, and he also gave the definition of 'maha-bhava'.*[see endnote 1] Everyone is saying, "maha-bhava, maha-bhava," but what exactly is maha-bhava? First we should know what is 'anuraga'. At the stage of anuraga the devotee always sees Krsna in ever-fresh ways.

In the morning, Srimati Radhika says: "Who is that boy? I have never seen Him before, He is very attractive."

Lalita replies "Who is He?! You don't know? All last night you were with Him!" Srimati Radhika then says, "No, no; I have never seen Him before."

When that anuraga reaches its most condensed stage, there is a competition between Sri Krsna and the gopis. When Srimati Radhika sees Krsna, Her attraction to Him and Her desire to please Him swell. When He feels that, He feels so happy. Then, when Srimati Radhika sees His happiness, Her happiness increases. In this way there is a never-ending competition between the anuraga of Krsna and the anuraga of the gopis.

When anuraga reaches a very high stage, it is called yavat-asraya-vrtti. Yavat means 'up to the extreme limit'. Sri Krsna is visaya, 'the enjoyer and object of pure transcendental love,' and the devotee is asraya, 'the enjoyed' or 'the container or reservoir of that love.' Krsna is the object and the devotee is the container. Of all the enjoyers (visaya-tattva), Sri Krsna is the topmost, and of all reservoirs of love, as the enjoyed (asraya-tattva), Srimati Radhika is the topmost.

Yavat-asraya-vrtti. Vrtti means tendency. The stage in which the tendency of the asraya to love Krsna increases up to the very topmost stage is called sva samvedya dasaa . Dasaa means 'condition.' This condition is so exalted that only the person who is experiencing it can actually explain or understand what it is.

There are three aspects or sections in prema: the object, the subject and the exchange between them. When anuraga becomes very thick, it comes to such a high stage that all the distinctions between these three diminish. Only the experience of the mellow taste of the relationship remains. This stage is so exalted that Srimati Radhika forgets that "I am Radhika," and Sri Krsna forgets that "I am Krsna." At this stage, prema, that pure transcendental love, which is "the doer," becomes prominent, and only the feeling of happiness remains. Who is the object and who is the subject - this understanding is lost in the stage of sva samvedya dasa. It is impossible to explain this appropriately; only Srimati Radhika, who experiences it, can explain it.

In yavat-asraya-vrtti there is ever-increasing attraction towards Krsna and it reaches to the topmost stage of sva samvedya dasaa. At this stage, all asta-sattvika bhavas (eight types of transcendental bodily transformations) completely manifest in one person and in one place, to the fullest extent. Normally there are five levels of experiencing asta-sattvika bhavas: dhumayita, jvalita, dipta, uddipta, suddipta - smoking, smouldering or lighted, blazing, inflamed and then intensely inflamed or fully blazing.*[see endnote 2] Perhaps one or two asta-sattvika bhavas appear in a very low stage of prema. In the stage of sva samvedya dasaa, however, all eight asta-sattvika bhavas are completely and fully present at one time. Srila Rupa Gosvami has explained all these stages of love. Without his mercy how could we know any of this?

We are indebted to Srila Rupa Gosvami. He has given us all these sublime topics, especially in his book Sri Ujjvala-nilamani.

Today is also Baladeva-Purnima, the appearance day of Lord Balarama. ["Purnima" means "the full moon day.] In Mathura, and especially in Vrndavana, many people believe that Balarama Prabhu is one year older than Krsna. Therefore they do not celebrate His appearance day today. Rather they observe it on the day called Baladeva-sat. Sat means 'six days after the full moon'.

These people think that Baladeva was actually born one year and two days before Krsna, but this is not possible. Of course, some pastimes may be different according to the different days of Brahma - the pastimes in one day of Brahma may be different from the pastimes in the next day. However, Srila Jiva Gosvami has described everything in Sri Gopala-campu. He rhetorically asks: how is it possible that Balarama could be one year older than Krsna? Srimad-Bhagavatam says t hat they both crawled on their hands and knees together. They were both given their nama-samskara (name-giving ceremony) on the same day. If Balarama were one year older than Krsna, was He one year without a name? For all these reasons, we cannot accept that conclusion.

Srila Jiva Gosvami has explained that the original Balarama, Rohini-nandana Rama, is always present in Vrndavana. Just as Krsna never leaves Vrndavana, so Balarama also does not leave. He was actually present, in Vrndavana, in the womb of His mother Rohini for fourteen months.

We hear in Srimad-Bhagavatam that the first six children of Devaki were killed by Kamsa, and that the seventh child was a miscarriage. This statement is reconciled in the commentaries of our acaryas. The original Balarama was in Vrndavana. He was in the womb of Rohini since the beginning - for fourteen months - but for seven months His manifestation or partial form, called Sankarsana or Mathuresa-Balarama, w as in the womb of Devaki. Then, after seven months, as the Srimad-Bhagavatam seems to say, Devaki had a miscarriage. But there was no miscarriage. After seven months, Yogamaya transferred the partial expansion of Balarama from the womb of Devaki to the womb of Rohini, where the full expansion of Balarama was already present. The partial expansion then merged with the complete Balarama.

[*Endnote 1
The essence of the hladini potency is love of God, the essence of love of God is emotion , and the ultimate development of emotion is mahabhava. (Caitanya-caritamrta, Adi-lila 4.68)

[Endnote 2: The word suddipta-sattvika is explained as follows by Srila Bhaktisiddhanta Sarasvati Thakura: "The Bhakti-rasamrta-sindhu mentions eight kinds of transcendental transformations in the bodies of advanced devotees. These are sometimes checked by the devotee, and there are two stages of such checking, technically known as dhumayita and jvalita. The dhumayita (smoking) stage is exhibited when only one or two transformations are slightly present and it is possible to conceal them. When more than two or three transcendental transformations are manifest and it is still possible to conceal them, although with great difficulty, that stage is called jvalita (lighted). When four or five symptoms are exhibited, the dipta (blazing) stage has been reached. When f ive, six or all eight symptoms are simultaneously manifest, that position is called uddipta (inflamed). And when all eight symptoms are multiplied a thousand times and are all visible at once, the devotee is in the suddipta (intensely inflamed) stage. Nitya-siddha-bhakta indicates the eternally liberated associates of the Lord. Such devotees enjoy the company of the Lord in four relationships-as servant, friend, parent or conjugal lover. (Purport, Caitanya-caritamrta Madhya-lila 6.12)

[Endnote 4: I adore the primeval Lord Govinda who assuming His own great subjective form, who bears the name of Sesa, replete with the all-accommodating potency, and reposing in the Causal Ocean with the infinity of the wo rld in the pores of His hair, enjoys creative sleep [yoga-nidra].
PURPORT
(The subjective nature of Ananta who has the form of the couch of Maha-Visnu, is described.) Ananta, the same who is the infinite couch on which Maha-Visnu reposes, is a distinctive appearance of the Divinity bearing the name of Sesa, having the subjective nature of the servant of Krsna. (Brahma-samhita, 5.47)]