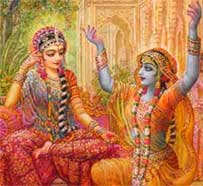 [The 2005 Vraja Mandala Parikrama ended on November 15th, successfully and without any obstacles. At the beginning of the parikrama Srila Narayana Maharaja gave a series of six evening lectures on Srila Visvanatha Cakravarti Thakura’s Prema-samput. After the completion of that course he spoke on Srila Cakravarti Thakura’s Madhurya Kadambini. In the mornings, throughout the entire Kartika month, he lectured on Lord Sri Krsna’s pastimes as described in the tenth Canto of Srimad-Bhagavatam. On the last day he culminated that course with the pastimes of Sri Krsna’s Rasa-lila and the Songs of the Gopis in Separation.

There are two paintings that the artists were working on throughout Kartika, created under the guidance of Srila Narayana Maharaja for the covers of his upcoming Hindi publications of Prema-samput and Camatkar-candrika. Work on these paintings somewhat slowed up the work on the Harikatha lectures for the last couple of weeks of Kartika, and we beg the kind reader to please excuse us for that. Now that the paintings are completed, we are preparing the series of classes on Prema-samput to send out to you. In the meantime, kindly read this lecture given on the glories of Srila Rupa Gosvami at Sri Rupa Sanatana Gaudiya Matha, during his disappearance day celebrations last August.

[A couple of days after Srila Rupa Gosvami's disappearance day was the appearance day of Lord Sri Balarama, the first expansion of Lord Krsna. Both those festivals were observed in Vrndavana, and on the day after Lord Balarama's festival Srila Narayana Maharaja returned to Mathura. There, the devotees were preparing for the next big festival, Sri Janmastami, the appearance day of Lord Krsna Himself. On the first day of his classes in Mathura, Srila Maharaja called on disciples to continue the glorification of Srila Rupa Gosvami. After the devotees spoke, Srila Maharaja personally spoke, and a translation of his Hindi discourse is below:]

Before Srila Rupa Gosvami, no one explained the glory of the love of Sri Radha. Before him, vatsalya-rasa (parental love for Sri Krsna) and other rasas were explained, but not this.

"If Rupa Gosvami had not appeared in Kali-yuga, who would have opened the great store-house of vraja-prema and distributed its contents freely?" (Yan Kali Rupa, verse 1)]

Rupa Gosvami established the supremacy of parakiya-bhava, based on the authentic evidence of Gopi-gita, Brahmara-gita and other chapters of Srimad-Bhagavatam.

["Dear Acyuta, You know very well why we have come here. Who but a cheater like You would abandon young women who come to see Him in the middle of the night, enchanted by the loud song of His flute? Just to see You, we have completely rejected our husbands, children, ancestors, brothers and other relatives." (Srimad-Bhagavatam 10.31.16)]

["The loving affairs of Sri Radha and Krsna are transcendental manifestations of the Lord's internal pleasure-giving potency. Although Radha and Krsna are one in Their identity, They separated Themselves eternally. Now these two transcendental identities have again united, in the form of Sri Krsna Caitanya. I bow down to Him, who has manifested Himself with the sentiment and complexion of Srimati Radharani although He is Krsna Himself." (Caitanya-caritamrta Adi-lila 1.5)]

Who taught us this? Srila Rupa Gosvami. And moreover, he himself wrote and explained:

["May that Lord who is known as the son of Srimati Sacidevi be transcendentally situated in the innermost chambers of your heart. Resplendent with the radiance of molten gold, He has appeared in the Age of Kali by His causeless mercy to bestow what no incarnation ever offered before: the most sublime and radiant spiritual knowledge of the mellow taste of His service." (Caitanya-caritamrta Adi-lila 1.4)]

["A sober person who can tolerate the urge to speak, the mind's demands, the actions of anger and the urges of the tongue, belly and genitals is qualified to make disciples all over the world." (Upadesamrta, verse 1)]

Don't blaspheme anyone. Gurudeva will correct everyone in connection with him. If you do parikrama of Giriraja Govardhana, Govardhana won't correct you. If you do devotional service under the guidance of Guru, he will correct.

["There are six principles favorable to the execution of pure devotional service: (1) being enthusiastic, (2) endeavoring with confidence, (3) being patient, (4) acting according to regulative principles [such as sravanam kirtanam visnoh smaranam [SB 7.5.23]-hearing, chanting and remembering Krsna], (5) abandoning the association of nondevotees, and (6) following in the footsteps of the previous acaryas. These six principles undoubtedly assure the complete success of pure devotional service." (Upadesamrta, verse 3)]

You have no time to blaspheme.

If one wants to understand Sri Caitanya Mahaprabhu, he must follow Sri Upadesamrta:

["A sober person who can tolerate the urge to speak, the mind's demands, the actions of anger and the urges of the tongue, belly and genitals is qualified to make disciples all over the world." (Upadesamrta, verse 1)]

["For what type of pleasure do I maintain my life?" Narottama dasa laments, "If I do not perform bhajana of Sri Caitanya Mahaprabhu, why do I not simply die?" (Aksepa, verse 5)]