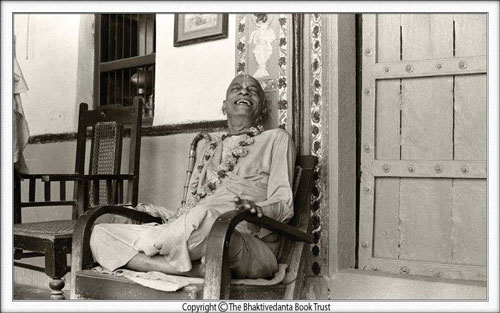 [Today is a very sacred day. It is Srila Prabhupada's appearance Day. This day is also Nandotsava, the day Nanda Maharaja held a large festival in honor of the birth of his son, Lord Sri Krsna.

Bhajanas at Sri Kesavaji Gaudiya Matha in Mathura began at 6.45 am, and Srila Narayana Maharaja began his glorification of Prabhupada at 7.15 am. He summarized Prabhupada's glorious life history beginning with his glorious birth, and then proceeding to his youth, his joining the Gaudiya Matha, his preaching in India, his taking of sannyasa (in that very temple in which the class was going on), his travel to the West and his miracle of quickly spreading Krsna consciousness in all the remote corners of the world.

At 8.15 Srila Narayana Maharaja led the Western and Indian devotees present in offering arati and puspanjali to Prabhupada, and then the devotees partook of an opulent feast in his honor. Soon after that the temple devotees began serving Nanda Maharaja's feast to over 10,000 guests.

Srila Maharaja's lecture will be transcribed and sent to you later, and in the meantime please accept this lecture below. Srila Maharaja spoke the following glorification of Prabhupada in Varsana, India, on Oct. 12, 1996, in honor of Prabhupada's disappearance day. This excerpt was never published before:]

I have known him personally since 1946, and I never saw him like that. I know personally that he has not only come only to give vaidhi-bhakti. He has come to preach rupanuga-bhakti.

One special quality I saw in him was that he was very simple, and always smiling. Before him, other preachers from India had gone to Western countries. They were very intelligent and knew all philosophical truths, but they were not so simple that they could mingle with everyone, including children. I have seen Srila Swami Maharaja; he used to play with little children and he was so funny. He had no false ego.

He always used simple words, and his method of giving Krsna consciousness was like that of Sri Caitanya Mahaprabhu. When Mahaprabhu was traveling to Vrndavana He chanted "Hare Krsna, Hare Krsna." Or, He chanted:

He continually wept, and it appeared as though the Ganges and Yamuna Rivers were flowing from His eyes. He was not thinking about where He was going. He was simply weeping and calling out, "Krsna Krsna, Krsna Krsna." And, by His influence, all the elephants, tigers, lions and bears of the forest also began to chant "Hare Krsna." Where was their philosophy? They were without philosophy.
So Srila Swami Maharaja went to the West and began to chant:

At first he did not try to explain many deep philosophical topics. He spoke very simply and told his audiences, "Chant Lord Krsna's name." From there he began. He used to love everyone, whether they were qualified or not; and those who met him became his.

When I went to the Western countries I followed in his footsteps. I did not discuss very complex Vedanta philosophy. I only gave simple Harikatha, and by his mercy and the mercy of my Gurudeva, so many were charmed.

Previous to his coming to the West, big scholars of the Gaudiya mission went to England and America; but practically speaking they were not able to make any disciples. On the other hand, we see that by his simplicity, by his very simple philosophical presentations, by preaching the holy name and loving all, he was so successful. Of course, the deepest philosophy was in that. Love is the deepest, most supreme philosophy.