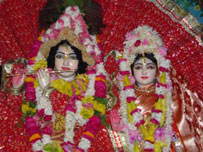 [Respected Readers,
Please accept our humble obeisances. Regarding the 2005 Kartika observance, Mathura parikrama began on October 9, and on that evening Srila Narayana Maharaja gave a short talk as an introduction to the celebration of this most auspicious month of Kartika. He spoke a few sentences in Hindi, then a few in English, back and forth, to satisfy his large Western, Eastern and Indian audience. The following is a transcription of His English sentences, and some of his Hindi:]

By the mercy of the Supreme Lord, we have assembled here to observe Kartika-vrata (the vows followed in the month of Kartika), niyama-seva (the rules and regulations of Kartika) and Urja-vrata.

Some people will begin from Ekadasi, some from Dvadvasi, and some will begin from Purnima. In our line, Srila Prabhupada Bhaktisiddhanta Sarasvati Gosvami Thakura used to begin from Purnima. Once, a certain Maharaja was beginning Kartika from Dvadasi. I asked him, “You are a disciple of Srila Prabhupada Bhaktisiddhanta Sarasvati Thakura, so what ground do you have for beginning your Kartika-vrata from Dvadasi?” He replied, “Srila Sanatana Gosvami has told us to do so.” I told him, “Srila Sanatana Gosvami has told about both dates, but you are a follower of Srila Prabhupada.” He could not answer.

My Guru Maharaja and Srila Prabhupada Bhaktisiddhanta Sarasvati Thakura follow this. Therefore we begin from Purnima; we must follow this.

Urja means power. Srimati Radhika is the Urja-sakti, power, of Krsna. Urja-vrata (vrata means vow) means Radha-vrata. Although we regularly recite Sri Damodara-astakam in the morning and evening, we must keep in mind that this is Sri Radha-vrata. We are attending classes – to please Srimati Radhika. Both in the morning and evening we will sing kirtanas of Radhika, and we will also visit the places of Sri Sri Radha and Krsna’s pastimes – we will go everywhere in Vraja Mandala. 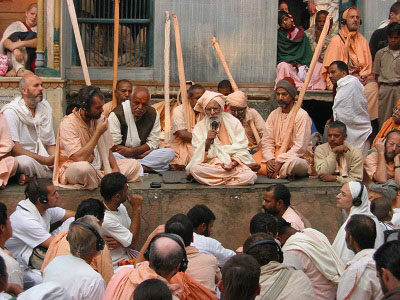 Why are we performing Vraja Mandala parikrama? It is because Sri Krsna gave a blessing to Narada Rsi that if one meditates on the Lord's pastimes or visits His pastime places in the holy dhama, these very pastimes will manifest within his or her heart. The dhama has power like that of Krsna; it will fulfill all desires of the devotees.

We will go to Radha-kunda, Syama-kunda, Govardhana, Bhandiravana, Bhandiravata, Varsana, Nandagaon, Visakha-kunda, Purnamasi ki Gufa, the place where Srimati Radhika sang Brahmara-gita in Uddhava-kyari, Ter-kadamba, Yavat and Kokilavana. We will also go to the three Carana-paharis; one in Kamyavana, one in Nandagaon and one near Baithana. We will also go to Rasa-sthali in Vrndavana, and to so many other places. We will pray to Srimati Radhika at all these places.

We will try to give up all things that are unfavorable to bhakti and we will accept very strongly what is favorable for bhakti.

Don’t endeavor at all for sense gratification. Those who want material happiness and a life of ease should not go on parikrama. Sometimes we may be late in taking prasadam and there will be only kitchri (rice and dahl mixed together) and nothing else, and sometimes there will be so many items. Sometimes there will be no attached bathroom, air conditioning or other facilities. These are austerities. There may be difficulties, and that is the austerity. Perform parikrama only for attaining bhakti.

Don’t quarrel with anyone; and especially don’t make our parikrama a place for looking for a marriage partner; be here only for bhakti. Don’t think, “I have come to find a husband or wife,” for this will make me very upset. I request that some senior ladies guide others in their groups. Make any resolution that this mentality should be stopped for one month. The ladies and men can look for their marriage partners in their own countries, but not here.

Regarding evening classes, I have spoken on Bhajana-rahasya in previous Kartikas and I reached up to chapter six. I may speak on that, and I may speak on Madhurya-kadambini. We can also speak about the places that we will visit.
I would like the devotees who have come to register their names.