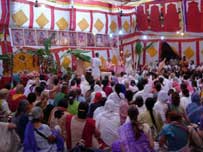 [To begin the Kartika month’s observances, Srila Narayana Maharaja gave a series of classes on Srila Visvanatha Cakravarti Thakura’s book, Prema-samput. He spoke in Hindi, as many of the devotees present listened to a simultaneous translation on their headphones. Every ten minutes or so, he called on Sripad Damodara Maharaja to translate his words into English, and at that time the devotees from Russia and elsewhere heard simultaneous translations in their own languages. The following is a transcription of the English translation of the first class in that series.]

By the mercy of Sri Guru and Gauranga we are trying to explain the words of Srila Visvanatha Cakravarti Thakura in his book called Prema-samput. Sri Caitanya Mahaprabhu, who is the combined form of Radha and Krsna, stayed for some time in the Gambhira and tasted many varieties of prema in the association of Srila Raya Ramananda and Srila Svarupa Damodara. Srila Rupa Gosvami wrote about some of these jewel-like varieties in his books, especially in Sri Ujjvala-nilamani.

Srila Visvanatha Cakravarti Thakura expanded on these ideas, especially in his Sri Krsna-bhavanamrta and this Prema-samput. The word samput means box. Prema-samput means box or treasure chest of this prema (pure love for Sri Krsna, and also pure love possessed by Krsna for His associates). Many hidden truths have been given in this book, and only those who hear or read it can understand the science of prema.

Herein, Srila Visvanatha Cakravarti Thakura has opened the treasure chest of prema. If he had not come and done so, we would not be able to understand the conceptions of Srila Rupa Gosvami.

Prema has a particular nature (svabhava). What is that? The nayaka (hero) has a great spiritual greed to taste a variety of transcendental ecstatic moods from the mouth of his beloved. The nayaka wants to hear how his prema or love has some lacking or faults.

The essence of this book is that Sri Krsna wants to hear directly from the lotus mouth of Srimati Radhika how His prema is faulty. Srila Visvanatha Cakravarti Thakura has said that Krsna is rasa-lampata. This means that He will do anything to relish transcendental love. He will place Himself into any situation that will give Him a chance to taste that rasa (mellow). This is His nature. When Radha and Krsna meet directly, Radhika will not explain His faults, but when She is in the association of like-minded gopis She will explain everything. Therefore, in order to hear these things from Her own lotus mouth, one day Sri Krsna dressed in the disguise of Syama-sakhi (a beautiful teenage gopi named Syama). How lovely He looks in that dress!

Wearing beautiful ornaments and dress, the demigoddess-disguised Krsna entered the courtyard of Srimati Radhika’s home in Yavat. Srimati Radhika, Lalita and Visakha could not understand that She was Krsna. Therefore, as She approached from a distance, Srimati Radhika said to Lalita, “Dear Lalita, who is this girl? She is extremely beautiful. Her beauty defeats the splendor of millions upon millions of moons!”

[Srila Gurudeva speaks in English:] Are you understanding something? If you don’t understand, I can stop speaking about this subject and speak about something else.]

[Continuation of the translation:] Srimati Radhika continued, “O Lalita! The beauty and the bodily effulgence of this sakhi are like millions of sapphires. Her effulgence is so luminous that it seems as if our courtyard has also become like a sapphire.” Srimati Radhika then sent Her sakhis, especially Lalita and Visakha, to bring the ‘girl’ close and inquire from ‘Her’.

“Who are you? Where have you come from? Is there any special reason for Your coming here?” Lalita and Visakha especially asked this again and again, but Syama-sakhi gave no answer. Finally Syamali-sakhi asked, but she also received no answer.

Radhika thought, “I must go there myself.” She approached the Syama-sakhi disguised Sri Krsna and asked, “Oh sakhi, who are You? You have attracted My mind. Are You not a demigoddess? It seems that all the beauty of this world has condensed and become Your form.”

Still, ‘Syama-sakhi’ did not say anything.

Srimati Radhika requested again and again, “O Sundari, beautiful one! Although You have come here, You have not told us your identity. You should pacify the greed of My mind and tell us who You are. I see that You are very shy, and this is a good quality. Your shyness increases Your beauty more and more, but there is no need for shyness or hesitation here. You should open Your heart and explain everything to us.”

At that time the Syama-sakhi-disguised Krsna began to take very long breaths, and then became silent. It looked as though ‘She’ had some distress, sadness or problem.

Seeing this, Srimati Radhika said, “Oh, You have some pain or disturbance in Your heart. I think that is why You remain silent. Oh Kamala-nayane, Oh girl with very long, beautiful lotus eyes! Open Your heart. There should be no hesitation or shyness in You. You should say directly what the cause of Your dissatisfaction is. After all, we are Your dear friends. That is why we are so interested in You and that is why we want to remove the cause of Your sadness. If anyone reveals her unhappiness to someone who is very near and dear to her, her suffering will definitely decrease and become very negligible.

“Or, maybe you didn’t commit any offence at all. Maybe some third person has come and falsely accused you to your beloved and has thereby destroyed your relationship.”

Srimati Radhika asked again, “O most beautiful one! I think I know what happened. It must be that you are married. Yes, yes; I think you have married, but I think you must have married a bad person. Or maybe you were cheated.

“Sometimes parents may show the girl a very nice boy, or to cheat a boy they will show a very nice girl, but at the time of marriage, they will give a very bad girl to the boy in marriage. So maybe you have been cheated in the same way. Is your husband lacking in good qualities? Or maybe after You were married You found out that Your husband did not like You at all. Maybe he detests You and tortures You.

Still, Syama-sakhi didn’t reply. Instead She lowered Her face, and Srimati Radhika’s inquisitiveness increased still more. Srimati Radhika said, “Maybe You have a co-wife. Maybe she has completely attracted the mind of Your husband and therefore your husband neglects You and she burns Your heart with cruel words.

“But I think this is not possible. After all, sakhi, You are so beautiful and qualified that it would be quite impossible for any man to ever be attracted to another girl.”

“O Sundari, lovely one,” Srimati Radhika continued, “I have heard from Paurnamasi, that the Supreme Lord took the female form of Mohini-murti. That form was so attractive that it bewildered and stole the heart of Mahadeva Siva. I think You may be that same Mohini, who has come here to bewilder us. Mohini captured the mind of Mahadeva and She herself was not bewildered. But sakhi, I tell You; if Krsna, Hari, comes here and throws His sidelong glance towards You, You will easily become bewildered. Our Krsna is Nayaka-cudamani, the crest-jewel of beloveds. He is very, very attractive, but You are also most beautiful. I think that if You and Krsna could meet He would become mad seeing You, but You would also become mad seeing His beauty.”

Listening to the conversation between Srimati Radhika and Syama-sakhi, the gopis became astonished and forgot themselves. They forgot who they were and where they were.

Srimati Radhika’s words and language were very sweet. Hearing them, Sri Krsna felt such extreme happiness that His body became affected with asta-sattvika-bhava (the eight ecstatic bodily transformations like bodily hairs standing on end and trembling). In order to cover the horripilation appearing on His body, Krsna covered all His limbs with His sari.

Srimati Radhika asked, “Oh sakhi! Oh beautiful one! I think that maybe You have some disease, some sickness; and that is why you are covering Your body.”

Srimati Radhika then told Visakha devi, “O Visakha, My most respected father is full with great affection for me, and he also knows how to remove all types of diseases. He has therefore sent some very special medicinal oil for me. That oil is in the corner of my bedroom. O Visakha, please go there and bring that oil, and we will massage it on this girl. After all, this is one female to another.”

She then told Krsna in the dress of a demigoddess, “This is not actually oil. You should think that this medicinal oil is the affection of my father, which has taken the form of oil. It is the symptom of affection that one will give to one’s beloved anything which is very dear to one’s self. Therefore O beautiful one, the life of this oil will be successful if we can put it on You. This oil removes all types of diseases. I will personally take this oil and massage it on top of your head with great affection.”

[It is now 6.50 PM] Now many of you will have to return to Vrndavana (from Mathura), so we will end here.