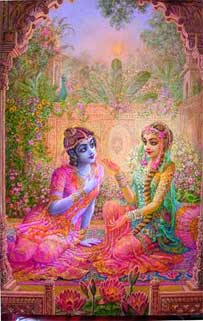 [A Note to the Readers
In the conversation between Sri Krsna and Srimati Radhika as discussed in the following lecture transcription, Radhika is not aware that She is speaking with Krsna, because He is in disguise.]

We have been speaking about Srila Visvanatha Cakravarti Thakura’s book, Prema-samput, since the day before yesterday. Srimati Radhika had sent Visakha-devi to get some medicinal oil, so that she Herself could rub it on the head of Sri Krsna who had disguised Himself as Syama-sakhi. [*See part one of this lecture]

Srimati Radhika said, "Alas, this sakhi is quite a cheater. We are trying our best to find out the cause of her sadness and disease, but she is not speaking at all." She ordered Her sakhis to take some warm water to bathe Syama-sakhi and then give her a massage. In this way her disease would be removed and she would be able to speak. She would smile and become happy.

Srimati Radhika continued, "If that doesn't work, I have another medicine. By placing this medicine on her body, all diseases of her body, mind and senses will disappear and her body will be nourished. This medicine was given to Me by Dhanvantari.

“Actually, I think that if Rasika-sekhara Krsna, the topmost connoisseur of conjugal love, will come and touch this young girl's body, she will definitely be okay and her happiness will return. Krsna's touch is completely indescribable. Asta-sattvika bhavas will appear on her body without a doubt, and she will smile."

Hearing the words of Srimati Radhika, Sri Krsna began to smile a bit. To disguise His smile He hung His head, and with His very beautiful, delicate fingers He brushed away the curls that had fallen on His forehead. With a very lovely lady-like voice, He then began to speak with Srimati Radhika and the sakhis. His speech was just like that of a cakori bird and, hearing His beautiful voice, Radhika and the sakhis became astonished.

Krsna as the heavenly damsel said, "Oh supremely beautiful Radha, I am actually from Svarga (the heavenly planets). I came here because I have a doubt about a certain subject, and apart from You, nobody in the entire world can completely fulfill My desire to have this doubt dispelled. That is why I have come down to this Earth planet."

Srimati Radhika replied, "What You have said is completely true. You must be a goddess from a heavenly planet, and that is why You are so astonishingly beautiful. You are equal in beauty only to Yourself. There is no one to compare to You. You are so attractive, like a lotus from the heavenly planets. Actually O beautiful one, whatever we said before regarding Your unhappiness, such as your husband leaving you, you leaving your husband or your husband not giving you so much affection, was only a joke. Please do not take any offense. Because You are so dear to us and we have so much affection for you, we feel we have the right to joke with You."

Sri Krsna replied, "Oh Radha, You are indeed very dear to Me. You have all good qualities. I am completely indebted to You. You have so much prema, which is astonishing and unlimited. You also have unlimited glorious qualities. Just to attain one drop of your prema I have come here to become your maidservant."

From this point Prema-samput actually begins.

Krsna as the demigoddess continued, "Oh Radha, listen carefully. I left Svarga to come to this planet. I was very unhappy there because a doubt had arisen in My heart, and only You can dispel it. Thus far, although I am hearing Your nectar-like words, My doubt and the unhappiness in My heart have not been dispelled.
The sound of Krsna's flute reaches even the heavenly planets. Despite sitting on the laps of their husbands, the ladies of the heavenly planets become mad upon hearing the sound of His flute and desire to run to Him. They become mad not only by hearing His flute, but by experiencing anything related to Him – such as His form, His speech, or His touch (His touching His dear devotees in Vraja). Anything related to Krsna is so attractive that it easily breaks one’s attachment towards material objects.

Sri Krsna continued, “That sound enters the ears like Cupid Himself, and the ladies in the heavenly planets become unconscious. They feel a burning sensation in their bodies, and their husbands cannot understand where this disease has come from. So much burning sensation is in their wives' bodies, that they keep those ladies separate so they themselves will not become burned.

"Oh Radha, another name for Svarga or heaven is Tri-dashalaya, which means there are only three stages of life there: childhood, adolescence and youth. There is no old age there. By the heavenly girls' hearing the sound of Krsna's flute, the name Tri-dashaloya became false, because everyone entered the same situation. There are not three situations anymore – but only one. Everyone enters the same mood, thinking, 'Let's go to Krsna.' The mood of being chaste and loyal to one's husband becomes crushed and defeated, and all become bewildered by the sound of Krsna's flute."

Krsna as the demigoddess continued, "I began to think deeply about where this flute-sound came from and to whom it belonged. Thinking in this way I followed the sound from the heavenly planets to this Earth planet. When I arrived here I stayed for some days at Vamsi-vata, where Krsna was performing His Rasa-lila. There, from a distance, I saw you all dancing with Him; and this is how I have come to know all of you – who is Visakha, who is Lalita, who is Campakalata and so on."

Srimati Radhika laughed and said, "Oh, You are most fortunate, and therefore You are very dear to us. With the sword of your desire to meet Sri Krsna, You have separated yourself from all other desires. You are the most fortunate damsel in the heavenly planets. To attain Krsna, ardent desire is necessary. Once this desire enters the heart, one cannot be pacified by anything else. When one feels constant pain by this desire to meet Krsna, it is called sumana, auspicious mind-set, but when we fall unconscious that quality of sumana is lost. When we fall unconscious we cannot go to meet Krsna, but You are the most fortunate girl because You have crossed all this and have met Him."

Hearing Srimati Radhika's joking words, Krsna began to smile and said, "Oh Radha, other ladies are not equal to You. I am also not equal to You, because I am not very attracted to Krsna at all. Besides, I have seen Him but He has not seen Me; I am only watching from a distance."

Srimati Radharani said, "Only You saw Krsna, so this is proof that You are attracted to Him. He is not a paramour lover for You; rather He is Your own beloved. You have seen Him and realized His pastimes, and You are therefore most fortunate. For this reason we cannot be joking with You. I cannot say anything false to You. Laksmi, who was produced from churning of the Milk Ocean, and Parvati, the wife of Siva, are not equal to You in any way. Therefore we cannot lie to You. You are really attracted to Krsna."

Srimati Radhika continued, "Oh Sakhi, You have seen the beauty of Krsna; so what is the necessity of any husband or any other man besides Him? Please tell me, what is Your question? For what reason have You come here? I joked with You for a moment only. Please present Your doubt to Me. What do You wish to ask?

Krsna replied, "Oh Radha, who can defeat You in joking and who can stop You from joking?"

When Srimati Radhika defeats Krsna in joking, all the sakhis clap their hands and chant, "Jaya Sri Radhe."

Krsna continued, "Despite your being human, all the girls in the heavenly planets bow their heads and offer obeisances to You."

Srimati Radhika is not human. She is Lord Sri Krsna's own hladini-sakti, who manifests a human-like form in order to serve Krsna's human-like pastimes.

Sri Krsna continued, "Oh Radha, don't be shy. Even Laksmi, Parvati, and the crest-jewel of chaste women like Arundhati have been defeated by Your ocean-like qualities of chastity and playful activities. They hope to achieve a drop of Your qualities. If it is not even possible for the girls in the heavenly planets to achieve equality with You, then what to speak of the girls of this world!"