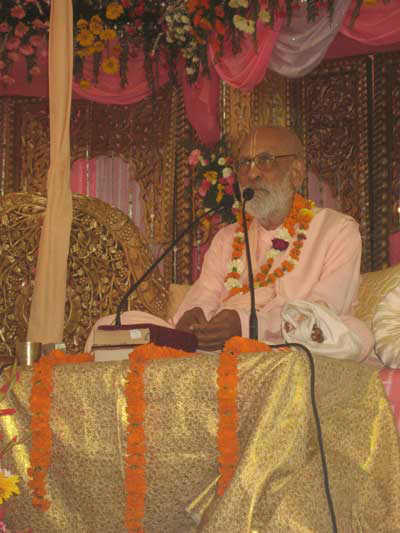 In Badger I explained so many things that I have never told before. I explained about the only process to escape from the burning fire of worldliness and gradually develop your Krsna consciousness. But I see that very few are accepting my teachings - most want to enter the fire and be burned. An example is given of the elephant, who rushes into a ditch because he is maddened by a she-elephant. Rushing into the fire of sense gratification is like this.

The Vedic literatures have told so many histories, like that of Pururava and others, about the burning fire, or the burning well. I have explained about this topic from the 11th Canto Srimad-Bhagavatam, from the teachings of Krsna to Uddhava: Therein Sri Krsna said, "If you really want to be happy and attain krsna-prema, then follow My - not 'my'; 'Krsna's' - instructions."

Especially, I have instructed the brahmacaris and sannyasis to be very careful. There is no more to tell than what I have told in Badger. Even those who are householders should try to come out from that burning well. Don't again try to enter household life. But hardly anyone is listening to me, so what can I do? This is maya.

Some think that Guru is not omniscient. They ask: "If Srila Bhaktivedanta Swami Prabhupada knew that practically all his sannyasis would fall down, why did he give them sannyasa? They are wrong to doubt. Lord Ramacandra knew that Sita would be stolen, so why did He go running after that deer? Krsna knew everything. He knew that His dynasty would be destroyed by becoming intoxicated on rice wine and killing each other. Why did He not stop this from happening?

Don't think that Guru is not omniscient. Guru always remembers Krsna and Krsna is with him. Srila Suta Gosvami has said, "My Guru, Srila Sukadeva Gosvami, knows everything." If you do not reconcile this, you will have some doubt in Guru. Guru is omniscient, but Guru should be bona fide. Try to follow my instructions and be happy.

[Question:] After the battle of Kuruksetra, the women wept as they went to the Ganges to offer oblations for the family members who had died in battle. Krsna was following behind and He was also crying. Sometimes it is difficult for us to understand the difference between compassion and sentimentalism. Can you please explain this?

[Srila Narayana Maharaja:] These are the humanlike pastimes of Krsna. Krsna is atmarama (satisfied within); He is more than atmarama. He is the Supreme Personality of Godhead Himself, so we cannot make a comparison between Him and others. It was by His wish that the Mahabharata battle transpired. If He liked, He could have stopped the war; but He purposely did not do so.

[Question:] Krsna is omniscient. Since He wants to give the living entities their minute independence to make the choice to do right or wrong in this world, He doesn't interfere. But isn't Gurudeva coming to this world specifically to interfere somewhat with the independence of the jivas; to preach to them and help them?

[Devotee:] If he is omniscient and knows everything that is going to be happening.

[Srila Narayana Maharaja:] He knows, but sometimes he doesn't interfere.

[Devotee:] What is the reason? Does he want the living entity to experience some result of their past activities?

[Srila Narayana Maharaja:] They should use their freedom. Madhyama-adhikari Guru will say, "You should not do this," but Krsna will not tell them. I am telling everyone, "You should not become entangled in sense gratification." For countless births we have been marrying, having daughters, sons, and so on; but again, in this life, he wants to marry. You can taste this same sense gratification in dogs, pigs and all other species, so why are you wasting time in this?

Even those who are in married life should not be attached. Gradually, they should come to the stage of vanaprastha [See endnote 2] and after that they should take sannyasa. They should give up everything like Dattatreya [See endnote 3], and like us; preaching the mission of Sri Caitanya Mahaprabhu everywhere.

Thank you all. Now I must get ready to go to Hong Kong.

[Devotee:] Srila Gurudeva, these are my friends, who have come to meet you for the first time.

[Srila Narayana Maharaja:] [Speaking to the guests:] You should know that one day you will be old. Your beauty will be gone, and one day you will have to give up this body. You will give up this world, and you don't know where you will go. After death, what will happen to you? Can you take anything with you? No. The soul is different from this body. Try to realize this.

[Endnote 1: In a similar way, a guru may be madhyama-uttama, a madyama-adhikari in the final stage; he may not yet be siddha (a perfect, self-realized soul) like Sri Narada Muni, Srila Sukadeva Gosvami, and others. In that case, if he is a sincere devotee and if a disciple follows him with deep faith, who will give the fruit of the disciple's worship? A madhyama-adhikari cannot give it. If one is an uttama-adhikari like Narada Rsi or Sri Sukadeva Gosvami or Srila Rupa Gosvami, he can give it at once, but a madhyama-adhikari cannot. The madhyama-adhikari guru will tell hari-katha and engage his disciples in such a way that they will advance in bhakti. What will be the result? If one has very deep faith in that guru, Krsna Himself will surely give the fruit, and that fruit will be transcendental. Krsna will give that disciple the fruit of the association and shelter of an uttama-adhikari guru. To a devotee initiated by a madhyama-adhikari guru and who really desires to attain the highest goal, Krsna gives the association and mercy of an uttama guru who can bless the disciple with that goal. Try to understand this. It is not very easy to understand, but try. Do not have any doubt about this. Uttama-adhikari gurus are not easily available; they are very rare in this world. Moreover, even if they are available, most people (Guru-Devatatma - Accepting Sri Guru as One's Life and Soul, page 28)

[Endnote 3: Yadu Maharaja was a very religious person in Krsna's family dynasty, and he had great love and affection for brahmanas and sages. One day he saw a naked person traveling. He noticed that although that person did not beg anything from anyone, he was very healthy and very happy." The following verse reveals the type of people who are unconditionally happy: "The supreme occupation [dharma] for all humanity is that by which men can attain to loving devotional service unto the transcendent Lord. Such devotional service must be unmotivated and uninterrupted to completely satisfy the self." (Srimad-Bhagavatam 1.2.6) That person was always remembering Sri Krsna's pastimes. Yadu Maharaja offered obeisances to him, put the foot dust of that person on his own head and said, "I would like to know something. You are naked and you have no possessions. You are not begging anything and you are roaming here and there. How is it that you look so happy and healthy? I want to know this." That person's name was Dattatreya, and he was a manifestation of God. Dattatreya replied, "O Yadu Maharaja, I have accepted twenty-four siksa-gurus: Prthivi (Earth), Vayu (air), sky, water, fire, the Moon, the Sun, the pigeon, the python, the ocean, the moth, the bumblebee, the elephant, the honey collector, the deer, the fish, the prostitute named Pingala, the hawk, the baby, the unmarried girl, the arrow-maker, the snake, the spider and the wasp." (Srila Narayana Maharaja, Badger, California, June 16, 2006)

"Remember all the examples (of the twenty-four siksa-gurus) that were told by Dattatreya. Give up everything - all worldly desire for wife, children and everything else. Give your heart, mind and everything you possess to Guru and Krsna. Then everything will be alright." (Srila Narayana Maharaja, morning walk on June 17, 2006)]