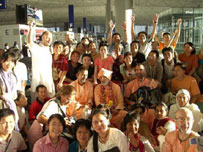 [Syamarani dasi:] One of your disciples asked me to ask you something. He is hoping you will kindly reconcile something regarding the omniscience of Guru. He says that Srila Bhaktisiddhanta Sarasvati Thakura wrote this in his scripture called Divine Governance:

"But it is not for us or anyone to fully know the ways of God. We are only aware of that much of the divine activity as is helpful to us for His service. The least particle of such knowledge is more than sufficient for all the purposes of our pure souls. The person who knows God does not understand His ways in the sense in which Godhead understands them. He understands them in the measure that is necessary for having his conscious share in those activities as a subservient of His subservients"

"On this mundane plane, in the conditioned state, we are anxious to know all things in the fullest measure, even as God Himself knows them. This bad ambition, properly enough, is impossible of realization. If it were possible for us to know everything, the distinction between God and ourselves would cease. Such ambition is the outcome of our attitude of disloyalty towards God. It proves that we are not willing to tolerate the domination of God. We are anxious to become God. This unnatural delusion is kept up by our experiences of this world." (Divine Governance, Bhaktisiddhanta Sarasvati Thakura)

It seems from this that the pure devotee is not omniscient, though you often say he is omniscient.

[Srila Narayana Maharaja:] I have told this so many times.

[Syamarani dasi:] The devotee is asking why Srila Bhaktisiddhanta Sarasvati Thakura wrote this. "But it is not for us or anyone to fully know the ways of God. We are only aware of that much of the divine activity as is helpful to us for His service." We can only understand him in a measure...

[Srila Narayana Maharaja:] What is there to reconcile. What Srila Bhaktisiddhanta Sarasvati Thakura is telling is okay.

[Syamarani dasi:] This seems to say that the soul cannot be omniscient, even in its pure state.

[Srila Narayana Maharaja:] Then why did Srila Suta Gosvami say that his Guru, Srila Sukadeva Gosvami can enter everyone's hearts?

[Srila Suta Gosvami said: Let me offer my respectful obeisances unto that great sage who can enter the hearts of all. When he went away to take up the renounced order of life , leaving home without undergoing reformation by the sacred thread or the ceremonies observed by the higher castes, his father, Vyasadeva, fearing separation from him, cried out, "O my son!" Indeed, only the trees, which were absorbed in the same feelings of separation, echoed in response to the begrieved father.

What Srila Prabhupada Bhaktisiddhanta Saravati Thakura has told is right, and in the same time it is okay to say that the Guru is omniscient. (Srimad-Bhagavatam 1.2.2)]

[Syamarani dasi:] How do we reconcile the two statements?

[Sripad Madhava Maharaja:] Srila Sarasvati Thakura said that Krsna is omniscient and the jiva in his perfect stage is omniscient, but not like Krsna.

[Sripad Madhava Maharaja:] There must be some distinction between God and the jiva.

[“The Supreme Lord has nothing to do, and no one is found to be equal to or greater than Him, for everything is done naturally and systematically by His multifarious energies." (Svetasvatara Upanisad 6.8)]

[Krsna-priya dasi:] I am helping with the preparation of your Gopi-gita lectures for publication. In the commentaries of Srila Jiva Gosvami and Srila Visvanatha Cakravarti Thakura and also in your lectures, it states: "If Krsna says" or "Krsna may say" or "Krsna says." In these instances, are the gopis seeing Krsna directly? Or are they seeing a sphurti (vision)? Or are they just thinking of Him and imagining what He is saying or might say? After all, they are searching for Him in that chapter.

[Srila Narayana Maharaja:] It is very difficult to understand the gopis' mood without their mercy. When they are absorbed in meditation on Krsna, they see Him and converse with Him.

Through meditation, the gopis hear and realize all these things. The gopis meditate and think, "if Krsna would hear what we say, He may reply like this or like that." They know: "He will say that."

[Srila Narayana Maharaja:] Srila Sanatana Gosvami has told us in his commentary that we must pray to the gopis, "Please manifest the meanings of your words."

[Srila Narayana Maharaja to Pitambari dasi from mainland China:] How are you? Are you okay?

[Pitambari dasi:] Sometimes it is not easy for me to chant the Hare Krsna mantra and remember Krsna; rather it is very easy to forget Krsna.

[Srila Narayana Maharaja:] You should continue to chant, and then the power of Lord Krsna's name will automatically come.

[Srila Narayana Maharaja:] You have lost them? Don't ever lose them. You can lose your life, but not your beads.

You should all try to come to Vraja Mandala Parikrama.

"O Lord of the universe, O universal form, I see in Your body many, many arms, bellies, mouths and eyes, expanded everywhere, without limit. I see in You no end, no middle and no beginning."

I don't know why it says "many bellies." I can understand that the Universal Form has many heads and arms and so on, but how can it have more than one belly?

[Srila Narayana Maharaja:] He can surely have many.

[Lalita-Kumara dasa brahmacari from Nanning, (mainland China):] If the preaching in Hong Kong and China is going on nicely, by your mercy, will you mercifully come here again? 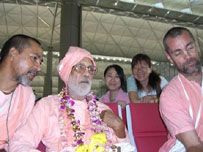 [Lalita-Kumar dasa:] Will you go to mainland China also?

[Krsnapriya dasi:] In Srila Visvanatha Cakravarti Thakura's Sarartha Darsini commentary on Gopi-gita, he mentions that the gopis are telling Krsna that they came to Him in order to pacify the fire caused by the five arrows of Kamadeva. They lamented that instead of pacifying the fire, He has fanned that fire and made it a hundred thousand times greater. In your lecture based on that commentary, it mentions about the arrows of Kamadeva at first, and then it says, "Krsna's arrows." So are the arrows Krsna's or Kamadeva's?

[Srila Narayana Maharaja:] Lord Sri Krsna is Kamadeva Himself. His sidelong glance, His flute playing and His lips are enchanting to the gopis. Puspabanaya dhimahi – Sri Krsna Himself is the enchanter of the gopis and He also attracts the mind of Kamadeva. Hence, the arrows referred to are Krsna's arrows, coming from His lotus eyes, etc.

[Lalita-kumara dasa brahmacari:] Should I be a brahmacari for my entire life?

[Sripad Sajjana Maharaja:] The devotees often ask me how they can feel that you will always be close to them, even though you are leaving now.

[Srila Narayana Maharaja:] I am always with them.

[Devotee:] How can I help other people to come to your lotus feet?

[Srila Narayana Maharaja:] Tell them whatever hari-katha you have heard.

All of you should try to come to India at the time of Vraja Mandala parikrama.