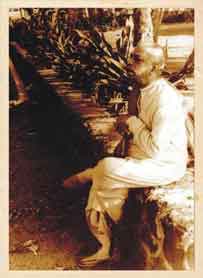 [In January, 2005, an intriguing and beautiful book was published by Gaura-vani Publications (different from GVP - Gaudiya Vedanta Publications), called Gaura-vani Pracarine. This book consists of Srila Narayana Maharaja's classes on the very profound, transcendental glories of our Srila Prabhupada Bhaktivedanta Swami Maharaja, which are not yet known to most of his disciples and followers. The central point in Srila Narayana Maharaja's illuminating lectures is the phrase "gaura-vani pracarine" in Prabhupada's pranama-mantra, and thousands of Western and Eastern devotees have already increased their love and understanding of Srila Prabhupada by learning the hidden meanings therein.

Some devotees had a question about the cover of Gaura-vani Pracarine, and they presented their question to Srila Narayana Maharaja in a darsana in Badger, California. The transcription of that darsana is presented below:]

[Question:] On the cover of your book Gaura-vani Pracarine, it says "A.C. Bhaktivedanta Swami Maharaja," without the addition of the title "Prabhupada." It is your book, and from your viewpoint or relationship, so the publishers didn't put in the word "Prabhupada." That is good, but some people are concerned that because the title "Prabhupada" is not there, many Iskcon-related devotees will be turned away.

It is not a fault of the disciples to call their spiritual master "Prabhupada." Disciples have full right to do so. In the case of Srila Bhaktivedanta Svami Maharaja allowing himself to be called "Prabhupada," this is his prerogative, and by this he wanted the whole world to know the glories of Srila Prabhupada Bhaktisiddhanta Sarasvati Thakura. Obviously he did not want to offend his god brothers, yet some were offended. Still, by his most glorious services to his Srila Prabhupada, the whole world knows his Prabhupada's glory.

Some of his disciples do not want to accept this. Some have tried to remove him from his Gurudeva. They wanted to tell everyone that there is no guru-parampara before him, but this is impossible.

At the same time, please do not insist that I personally call him "Prabhupada.". I am the publisher of this book. I am the writer of this book. Others only edited it. My Gurudeva has ordered his disciples, as the other disciples of Srila Bhaktisiddhanta Sarasvati Thakura ordered their disciples: "Don’t call me 'Prabhupada.'" For this reason I have never directly called my Gurudeva "Prabhupada," although I have done so in my heart. I accept this. For me it is not proper to use the title "Prabhupada" for my siksa-guru, so you should not be disturbed.

[Question:] I understand this principle – that you do not address him as Prabhupada, because Srila Bhaktisiddhanta Sarasvati Thakura is Srila Prabhupada. When I saw this book In Vrndavana I thought it was beautiful – until some of my god-sisters said, "Look: They have deprecated Prabhupada."

[Sripad Padmanabha Maharaja:] She said that she fully understands what you are saying, and she fully accepts that you are not required to address our Prabhupada as "Prabhupada." She has one point, and we have discussed that point amongst ourselves: This book is especially meant for the Iskcon devotees, so they will be able to understand that your teachings and our Prabhupada Srila Bhaktivedanta Swami Maharaja's teachings are the same.

[Srila Narayana Maharaja:] For this, I cannot change my view regarding the title.

[Sripad Padmanabha Maharaja:] In the book itself we never put the word "Prabhupada" when you are speaking. We only use the title when the editors are speaking in the editorial notes. Our feeling is that in order for the Iskcon devotees to accept the book, then on the cover…

[Sripad Padmanabha Maharaja:] In this book, when you are not speaking, when the editor is speaking in the editorial sections, the title "Prabhupada" is there. Our only point is that we should just put the name "Prabhupada" on the cover.

[Srila Narayana Maharaja:] Don't give me pressure for this. Don't try to change my view. Whether anyone will read the book or not doesn't matter. I have glorified my siksa-guru, much more so than if I would simply call him "Prabhupada." Simply calling, "Prabhupada! Prabhupada!" is not glorifying the spiritual master. Actually, a disciple who knows the heart of the spiritual master can really glorify him, even if he does not use the title "Prabhupada." I have so much regard for him – as much as I have for my diksa-guru. If I am not calling him "Prabhupada," there is no harm in that.

[Sripad Madhava Maharaja:] This book is for everyone, not just the Iskcon devotees. He wrote you (Srila Narayana Maharaja) so many letters, and he did not sign them "Prabhupada." He always signed them "A.C. Bhaktivedanta Swami Maharaja."

[Vrnda dasi:] He personally never wrote the title "Prabhupada" in his books.

[Srila Narayana Maharaja:] So don't be worried about this. They are writing so many books, and they are using the title "Prabhupada." I accept what they are doing. Any disciple can call their Gurudeva "Prabhupada" – no harm.

[Padmanabha Maharaja:] The main concern is that the Iskcon devotees will not read the book, just because they do not see the name "Prabhupada."

[Brajanath dasa:] They will read. They read anything, especially that which is controversial, just to find out how controversial it is so that they can 'warn' others. The simple devotees will understand this principle Gurudeva is explaining.

[Srila Narayana Maharaja:] If they do not read, no harm. People in general will know the glorification of Srila Swami Maharaja from this book. They will know I have greater regard for him, my siksa-guru, than those who call him "Prabhupada."

[Padmanabha Maharaja:] From another angle, maybe it is best that others should come to understand this principle, rather than the higher principle coming down to the lower one.

[Srila Narayana Maharaja:] You only honor the word "Prabhupada," but you do not know the glory of Srila Bhaktivedanta Swami Maharaja himself. You don't want to know his glory?

[Question:] I just know that when I saw the book…

[Srila Narayana Maharaja:] Your view is wrong. Take my view. Understand that to wholeheartedly accept a pure devotee as siksa-guru is millions of times more important than just calling him "Prabhupada."

No one should compel anyone else: "You must call him 'Prabhupada.'"

[Padmanabha Maharaja:] All of Srila Gurudeva's books have been around for about 12 years, and so many Iskcon devotees are reading them, even though on the cover there is no special mention of the honorific title "Prabhupada." I think they will read "Gaura-vani Pracarine" anyway.

[Srila Narayana Maharaja:] I have never stopped anyone from calling him "Prabhupada," but you should not compel me to call him "Prabhupada." I will not write this on the book. I am the writer of this book, not the editors. Try to understand, and don't be worried about this. You should know the glory of your Gurudeva. You should see how I have glorified him. Everyone who has read the book has appreciated it. None of them are saying, "Why didn't you write the word 'Prabhupada'?"

[Brajanatha dasa:] Some will read it only to find faults. And if they read it, they will realize Prabhupada's glories.

[Question:] You always say that our Prabhupada is omniscient – he is sarva-jna and tri-kala-jna.

[Srila Narayana Maharaja:] But for the Guru's human-like pastimes he may appear to forget something; he acts as if he doesn't know. A realized Guru may overlook what is happening and what will happen. An example of this is Srila Sukadeva Gosvami. He had nothing to do with all the happenings of this world. Guru may sometimes control the situation, and sometimes he does not control.

[Question:] You said that our Srila Prabhupada can never make a mistake, and we also believe that. Sometimes a few of his god-brothers and their followers criticized him because he allowed the word "Prabhupada" to be used for him.

[Srila Narayana Maharaja:] He was independent to do anything. He was not under anyone's control, and that was not an offense. All disciples can call their Gurudeva "Prabhupada," no harm. This has been written in the Srimad-Bhagavatam, in the explanation of Srila Visvanatha Cakravarti Thakura, that Srila Jiva Gosvami is called "Prabhupada" and Srila Santana Gosvami is also called "Prabhupada." This has been written, so it is all right. My disciples may also call me "Prabhupada," and there is no harm in that. But I have chosen to tell my disciples not to do this, because our Gurudeva has told us not to.

In all his letters he never used the word "Prabhupada."

[Question:] That is a clear answer – that Guru is independent and in touch with Krsna.

[Srila Narayana Maharaja:] Yes. I am also independent. I may tell my disciples to call me "Prabhupada," because it is stated in sastra, but I cannot do so, because of what I have been told by my Gurudeva.