What to Pray For 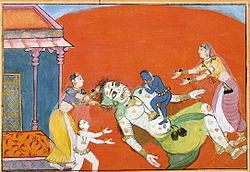 Lord Krsna became pleased when He heard Sri Damodarastakam - the prayer of Satyavrata Muni - and told him, "You may ask for any benediction."

Satyavrata Muni replied, "You are the king of all gods and demigods. You have the power to give any benediction You like. But I don't desire any benediction of this world, within or outside the entire universe, or in Siva-loka. I don't want mukti. I don't even want Vaikuntha-bhakti, or Dvarakadisa-bhakti like that of Rukmini, Satyabhama or Uddhava, nor do I desire bhakti like that of Kubja or any others in Mathura. My only desire is that I see Your boyhood pastimes -Your Damodara-lila - where You are controlled by Srimati Yasoda, with tears coming from Your eyes like the flow of the Ganga and Yamuna. I want to see You when You are bitterly weeping, being fearful of Your mother. I want that Your very special, sweet face and form, being bound by Yasoda, should come into my heart. Except for this, I do not want anything. Please manifest that very form in my heart; I will never want anything else."

How can we please Krsna when we sing His glories? There are so many levels of glorifying Him. We glorify Him when we pray to Him, "You lifted the Earth," or "You killed Hiranyakasipu." By relating these glories He will be happy, but He will be happier when we say, "You are the beloved of Rukmini" or "You have saved the Pandavas." We glorify Him when we say, "You gave up Your promise, in order to protect the promise of Grandfather Bhisma," or "You showed great opulence to Your devotee Arjuna." He will be so satisfied when He hears us relate these pastimes. However, He will be most satisfied when we tell Him, "Oh, I saw You in the groves of Govardhana , massaging the lotus feet of Srimati Radhika, and She was not accepting You. You placed Your flute at Her lotus feet, and Your head there also. You promised Her: 'I will never again commit any offence. I will not go to anyone else. I am Yours, I am Yours!'"

Krsna will then ask you, "Oh, what do You want?" Without hesitating, He will give Himself.

["O Deva! Although You are capable of granting any boon, I do not pray to You for liberation, eternal life in Vaikuntha, or for any other benediction which may be obtained by executing the nine processes of bhakti. O Lord! May Your form as a cowherd boy forever remain manifest in my heart. Besides this what is the use of any other benediction?"]

Satyavrata Muni had glorified Krsna by sp eaking of all His pastimes in Gokula, which are like an ocean of rasa. Krsna would sink in that ocean, and He would make all the Vrajavasis sink in it. He became very pleased with Satyavrata Muni's prayers, and He told Satyavrata Muni that He wanted to give him any benediction he desired.

Krsna asked him, "Do you want worldly happiness? Is there any worldly thing you require?"

"Do you wish to marry a very beautiful princess?"

Krsna then said, "I will give you moksa (liberation). This is very rare and very difficult to attain. Sankaracarya performed austerities for thousands of years, uttering 'aham brahmasmi, aham brahmasmi; tat tvam asi, tat tvam asi.'"

Satyavarata Muni replied, "I offer my obeisances to moksa. If anyone wants it, that is alright, but I don't like it." The word "moksa-vadhim" in this fourth verse of Sri Damodarastakam means "mukti up to the last stage." Moksa is of five kinds: salokya - attaining a planet on which Lord Narayana lives; samipya - to be near Narayana; sarupya - to have a form similar to that of four-armed Lord Narayana; sarsti - having the same opulence as Narayana; and lastly, sayujya - to merge into Narayana.

A lower class Vaisnava may want four of the five kinds of mukti: samipya, salokya, sarupya and sarsti, but he will never desire sayujya under any condition.

Why not? In sayujya mukti a man becomes like a zero, like a stone, like dry wood. That person has no identity; no sense of 'I am'. Our Guru Maharaja, Srila Bhakti Prajnana Kesavaja Gosvami Maharaja, ex plained to us that although it is advertised as blissful, sayujya-mukti is not blissful at all. It is like being stool; there is no difference at all between sayujya-mukti and stool. Sayujya is opposed to bhakti, and therefore even the lowest class of devotee doesn't desire it.

There are two kinds of mukti: sukha aisvarya-uttara and prema-seva-uttara. In the first kind, the jiva thinks that he will personally be happy with the four muktis, and he really becomes so. His desire is for his happiness as well as for the service of Narayana, but it is more so for his own happiness. It is for that reason he desires to live with Narayana, to have a form like His and to have opulence like His. This mukti may be experienced in Dhruva-loka, which is within this universe.

Satyavrata Muni prayed with the word "moksa-vadhi." He wanted neither this world, nor moksha, nor moksa-vadi Vaikuntha. What is the meaning of na canya vrneham? It has a very deep meaning, and Srila Sanatana Gosvami has explained it.

They knew that Lord Narayana has no fear. None can kill Him or harm Him in any way, and therefore they wanted to know why Jaya and Vijaya were stopping them from meeting with Him. They told those gate-keepers, "You are just like demons. There is no need for demons in Vaikuntha; therefore you shall take birth on Earth."

Lord Narayana then removed His yogamaya potency, at which time Jaya and Vijaya understood, "Oh! We have done wrong." They both began to weep, and Narayana told them, "There is no anger in Vaikuntha. The sages became angry by the influence of My yogamaya potency. You are not at fault. Everything here is going on by My yogamaya. There is no envy or any other bad quality in Vaikuntha, so how could you have become envious? This incident was not caused by anyone's fault; I did it for a deep reason.

The four Kumaras then began to pray to the lotus feet of Narayana, apologising and begging for forgiveness. After this, the Four Kumaras became pure devotees and knew the glories of Sri Krsna's pastimes. Srila Rupa Gosvami has glorifies them in his song "radhe, jaya jaya madhava dayite", with the words "sanaka sanatana bharite carite - Srimati Radhika's glories are described by the Four Kumaras."