We have heard from Vedic scriptures and Guru that when a high-class Vaisnava is speaking hari-katha, we should think, "It is better not to perform parikrama of Govardhana, or Navadvipa, or anywhere else. Better that I hear hari-katha." Sri Giriraja Govardhana will give us His mercy only after the Vaisnavas have given us their mercy. Govardhana will not speak to us or instruct us, and therefore our hearts will not be so rapidly purified. It is better to hear hari-katha than to perform any other activity at that time. We see that so many mayavadis are staying in Govardhana, but their situation is not changing.

In the Srimad-Bhagavatam, Vrtasura prayed,

["O my Lord, my master, I am wandering throughout this material world as a result of my fruitive activities. Therefore I simply seek friendship in the association of Your pious and enlightened devotees. My attachment to my body, wife, children and home is continuing by the spell of Your external energy, but I wish to be attached to them no longer. Let my mind, my consciousness and everyth ing I have be attached only to You."(Srimad-Bhagavatam, 6.11.27)]

He also prayed for the chance to have the association of the Vaisnavas (sat-sanga) and to hear their kirtana. Whenever we get a chance for sat-sanga and kirtana, we must take that in precedence to any other activity. We should leave everything for hari-katha, and afterwards we can perform parikarama or any other activity. By hari-katha and sat-sanga, we can get Vraja-bhakti.

Today is a very special day. During this month of Karttika, Urja-vrata, *, two years ago, nitya-lila pravista om Sri Srimad Bhaktivedanta Vamana Maharaja disappeared from the vision of this world. And, exactly two years previous to that was the disappearance of Pujyapada Tridandisvami Srila Bhaktivedanta Trivikrama Maharaja.

Srila Vamana Maharaja had many specialties, but especially he would help create articles for the Gaudiya Patrika. Once we were performing our Navadvipa-parikrama, and the next day we were to go to Narasingha-palli. Even today I remember that Srila Gurudeva, Sri Srimad Bhakti Prajnana Kesava Gosvami Maharaja, wanted to write an article. He called Srila Vamana Maharaja and said, "Oh, write." Then, even in the midst of everyone else talking, Srila Gurudeva spoke and Srila Vamana Maharaja wrote down Gurudeva's words. His writing was so excellent  in such perfect language  that there was no need for any editing. It would directly go to the press.

I spent much time with Pujyapada Trivikrama Maharaja. Sometimes we would debate, and Gurudeva would always take m y side. Srila Vamana Maharaja and I did not debate. 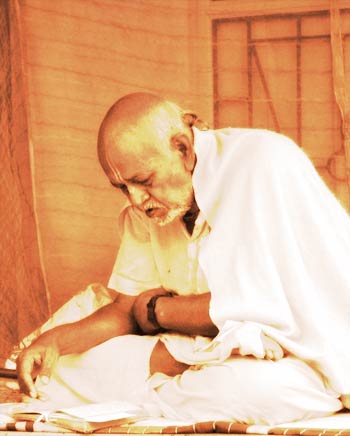 All the disciples worked cooperatively and kept their heads down when Srila Vamana Maharaja and Srila Trivikrama Maharaja were present . As soon as they disappeared, however, some small boys raised their heads and began causing disturbance.

On the disappearance day of these two maha-purusas, I offer millions of obeisances and puspanjali at their feet. I pray that they may bestow mercy upon me, and upon all of us.

"In the Padma Purana there is a statement that one should perform the ceremonies for the Lord according to one's financial position. Everyone should observe the different ceremonies and celebrations of the Lord by all means. One of the most important of these ceremonial functions is called Urja-vrata. Urja-vrata is observed in the month of Karttika (October-November); especially in Vrndavana, there is a specific program for temple worship of the Lord in His Damodara form. Damodara refers to Krsna's being bound with rope by His mother, Yasoda. It is said that just as Lord Damodara is very dear to His devotees, so the month, known as Damodara or Karttika is also very dear to them."
(Nectar of Devotion, chapter 12)

"The month of Karttika is also called "Urja". To render devotional service to Lord Damodara by hearing and chanting His glories and in other ways also is called 'urjadara" (worship in the month of Karttika)."
(Jaiva-dharma, chapter 20)